The clouded leopard (Neofelis nebulosa) is a cat found from the Himalayan foothills through mainland Southeast Asia into China, and has been classified as Vulnerable in 2008 by the International Union for Conservation of Nature (IUCN). Its total population size is suspected to be fewer than 10,000 mature individuals, with a decreasing population trend, and no single population numbering more than 1,000 adults.[2]

The clouded leopard is considered to form an evolutionary link between the big cats and the small cats.[3] It represents the smallest of the big cats, but is not closely related to the leopard.[4]

The Sunda clouded leopard (Neofelis diardi) found on Sumatra and Borneo is genetically distinct and has been considered a separate species since 2006.[5][6]

The fur of clouded leopards is of a dark grey or ochreous ground-colour, often largely obliterated by black and dark dusky-grey blotched pattern. There are black spots on the head, and the ears are black. Partly fused or broken-up stripes run from the corner of the eyes over the cheek, from the corner of the mouth to the neck, and along the nape to the shoulders. Elongated blotches continue down the spine and form a single median stripe on the loins. Two large blotches of dark dusky-grey hair on the side of the shoulders are each emphasized posteriorly by a dark stripe, which passes on to the foreleg and breaks up into irregular spots. The flanks are marked by dark dusky-grey irregular blotches bordered behind by long, oblique, irregularly curved or looped stripes. These blotches yielding the clouded pattern suggest the English name of the cat. The underparts and legs are spotted, and the tail is marked by large, irregular, paired spots. Females are slightly smaller than males.[4]

Their irises are usually either greyish-green or brownish-yellow in color. Their legs are short and stout, with broad paws. They have rather short limbs compared to the other big cats, but their hind limbs are longer than their front limbs to allow for increased jumping and leaping capabilities. Their ulnae and radii are not fused, which also contributes to a greater range of motion when climbing trees and stalking prey.[7]

They have exceptionally long, piercing canine teeth, the upper being about three times as long as the basal width of the socket.[4] The upper pair of canines may measure 4 cm (1.6 in) or longer.[8] They are often referred to as a “modern-day saber tooth” because they have the largest canines in proportion to their body size, matching the tiger in canine length. The first premolar is usually absent, and they also have a very distinct long and slim skull with well-developed occipital and sagittal crests to support the enlarged jaw muscles.[7]

The scientific name of the genus Neofelis is a composite of the Greek word νεο- meaning "new", and the Latin word feles meaning "cat", so it literally means "new cat."[10][11]

Clouded leopards occur from the Himalayan foothills in Nepal and India to Myanmar, Bhutan, Thailand, Peninsular Malaysia, Indochina, and in China south of the Yangtze River. Some are found in the mixed-evergreen forests of the northeastern and southeastern parts of Bangladesh. They are regionally extinct in Taiwan.[2] Clouded leopards prefer open- or closed-forest habitats to other habitat types.[12] They have been reported from relatively open, dry tropical forest in Myanmar and in Thailand.[13]

Clouded leopards were thought to be extinct in Nepal since the late 1860s. But in 1987 and 1988, four individuals were found in the central part of the country, close to Chitwan National Park and in the Pokhara Valley. These findings extended their known range westward, suggesting they are able to survive and breed in degraded woodlands that previously harboured moist subtropical semideciduous forest.[19] Since then, individuals were recorded in the Shivapuri Nagarjun National Park and in the Annapurna Conservation Area.[20][21]

At present, these three subspecies of Neofelis nebulosa are recognized:[22]

Clouded leopards are the most talented climbers among the cats. In captivity, they have been observed to climb down vertical tree trunks head first, and hang on to branches with their hind paws bent around branchings of tree limbs. They are capable of supination and can even hang down from branches only by bending their hind paws and their tail around them. When jumping down, they keep hanging on to a branch this way until the very last moment. They can climb on horizontal branches with their back to the ground, and in this position make short jumps forward. When balancing on thin branches, they use their long tails to steer. They can easily jump up to 1.2 m (3.9 ft) high.[3]

Clouded leopards have been observed to scent mark in captivity by urine-spraying and head-rubbing on prominent objects. Presumably such habits are used to mark their territory in the wild, although the size of their home ranges is unknown. Like other big cats, they do not appear able to purr[disputed – discuss], but they otherwise have a wide range of vocalisations, including mewing, hissing, growling, moaning, and snorting. When communicating, two individuals will emit low snorting sounds that are called prusten when approaching each other in a friendly manner. They also use long-call communication used over large distances, which could either be a type of mating call between different territories or a warning call to other cats encroaching on other territories.[7] Apart from information stemming from observations of captive clouded leopards, little is known of their natural history and behavior in the wild. Early accounts depict them as rare, secretive, arboreal, and nocturnal denizens of dense primary forest. More recent observations suggest they may not be as arboreal and nocturnal as previously thought. They may use trees as daytime rest sites, but also spend a significant proportion of time on the ground. Some daytime movement has been observed, suggesting they are not strictly nocturnal but crepuscular. However, the time of day when they are active depends on their prey and the level of human disturbance.[8]

They live a solitary lifestyle, resting in trees during the day and hunting at night. When hunting, clouded leopards either come down from their perches in the trees and stalk their prey or lie and wait for the prey to come to them. After making a kill and eating, they usually retreat to the trees to digest and rest.[25]

Their partly nocturnal and far-ranging behaviour, their low densities, and because they inhabit densely vegetated habitats and remote areas makes the counting and monitoring of clouded leopards extremely difficult. Consequently, little is known about their behaviour and status. Available information on their ecology is anecdotal, based on local interviews and a few sighting reports.[26]

Home ranges have only been estimated in Thailand:

Little is known of the diet of clouded leopards. Their prey includes both arboreal and terrestrial vertebrates.[8] Pocock presumed they are adapted for preying upon herbivorous mammals of considerable bulk because of their powerful build and the deep penetration of their bites, attested by their long canines.[4] Confirmed prey species include hog deer, slow loris, brush-tailed porcupine, Malayan pangolin and Indochinese ground squirrel.[12] Known prey species in China include barking deer and pheasants.[28]

Both males and females average 26 months at first reproduction. Mating usually occurs during December and March. The males tend to be very aggressive during sexual encounters and have been known to bite the female on the neck during courtship, severing her vertebrae. With this in mind, male and female compatibility has been deemed extremely important when attempting breeding in captivity. The pair will meet and mate multiple times over the course of several days. The male grasps the female by the neck and the female responds with vocalization that encourages the male to continue. The male then leaves and is not involved in raising the kittens.[7] Estrus last six days on average, estrous cycle averages 30 days. After a gestation period of 93 ± 6 days, females give birth to a litter of one to five, most often three cubs.[29]

Initially, the young are blind and helpless, much like the young of many other cats, and weigh from 140 to 280 g (4.9 to 9.9 oz). Unlike adults, the kittens' spots are "solid" — completely dark rather than dark rings. The young can see within about 10 days of birth, are active within five weeks, and are fully weaned at around three months of age. They attain the adult coat pattern at around six months, and probably become independent after around 10 months. Females are able to bear one litter each year.[8] The mother is believed to hide her kittens in dense vegetation while she goes to hunt, though little concrete evidence supports this theory, since their lifestyle is so secretive.[7]

In captivity, they have an average lifespan of 11 years. One individual has lived to be almost 17 years old.[30][31]

Many of the remaining forest areas are too small to ensure the long-term persistence of clouded leopard populations.[26] They are threatened by habitat loss following large–scale deforestation and commercial poaching for the wildlife trade. Skins, claws, and teeth are offered for decoration and clothing, bones and meat as substitute for tiger in traditional Asian medicines and tonics, and live animals for the pet trade. Few poaching incidents have been documented, but all range states are believed to have some degree of commercial poaching. In recent years, substantial domestic markets existed in Indonesia, Myanmar, and Vietnam.[32][33]

In Myanmar, 301 body parts of at least 279 clouded leopards, mostly skins and skeletons, were observed in four markets surveyed between 1991 and 2006. Three of the surveyed markets are situated on international borders with China and Thailand, and cater to international buyers, although clouded leopards are completely protected under Myanmar's national legislation. Effective implementation and enforcement of CITES is considered inadequate.[34] 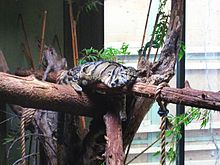 Neofelis nebulosa is listed in CITES Appendix I and protected over most of its range. Hunting is banned in Bangladesh, China, India, Malaysia, Myanmar, Nepal, Taiwan, Thailand, and Vietnam. It is not legally protected outside Bhutan's protected areas. Hunting is regulated in Laos. No information about its protection status is available from Cambodia.[29] These bans, however, are poorly enforced in India, Malaysia, and Thailand.[32]

In the United States, the clouded leopard is listed as endangered under the Endangered Species Act, further prohibiting trade in the animals or any parts or products made from them.[1]

A clouded leopard at the Feline Conservation Center, Rosamond, California

Early captive-breeding programs involving clouded leopards were not very successful, largely due to ignorance of courtship activity among them in the wild. Experience has taught keepers that introducing pairs of clouded leopards at a young age gives opportunities for the pair to bond and breed successfully. Males have the reputation of being aggressive towards females. Facilities breeding clouded leopards need to provide the female a secluded, off-exhibit area.[9] Modern breeding programs involve carefully regulated introductions between prospective mating pairs, and take into account the requirements for enriched enclosures. Stimulating natural behavior by providing adequate space to permit climbing minimizes stress. This, combined with a feeding program that fulfills the proper dietary requirements, has promoted more successful breeding in recent years.[citation needed]

In March 2011, two breeding females at the Nashville Zoo at Grassmere in Nashville, Tennessee, gave birth to three cubs, which are being raised by zookeepers. Each cub weighed 0.5 lb (0.23 kg).[35] In June 2011, two cubs were born at the Point Defiance Zoo & Aquarium in Tacoma, Washington. The breeding pair was brought from the Khao Kheow Open Zoo in Thailand in an ongoing education and research exchange program.[36] Four cubs were born at the Nashville Zoo in 2012.[37]

The Rukai people of Taiwan considered the hunting of clouded leopards a taboo.[39]