It is a small species (55–69 cm long, weight range 0.5 – 1.0 kg). It is a dark grey colour with the tip of the tail being darker. The legs are a darker grey than the rest of the body. It has a typical elongated mongoose body-shape. The ears are small and rounded and situated on the sides of the head. The tail is long and bushy. The teeth show adaptations for both cutting and crushing.

The Cape grey mongoose feeds mostly on insects and small rodents, but will also eat birds, small reptiles, amphibians, other invertebrates, and fruit. They have been known to eat carrion and garbage as well.

Small rodents, in particular Otomys and Rhabdomys, are the most important dietary component. Exceptionally, immature hares or the young of small antelope such as Cape Grysbok may be attacked.[3]

Until a few decades ago the species was thought to be endemic to the Cape Province, but it is now known to occur in much of the rest of South Africa and in the west, northwards to southern Angola. It is not yet clear how continuous the range is, nor how much of this wider presence is due to extension of its range. Its density in areas where the species is established, ranges from one mongoose per 60 hectares to one per two hectares.[3]

It inhabits macchia-type vegetation (fynbos), semi-desert scrub (Karoo), thicket and forest. However, it is not found in the Grassland biome. Often they live in close association with man, often under the floors of outbuildings, and even live successfully on the fringe of suburbia. When habituated to human presence they may tolerate close approach.[3] 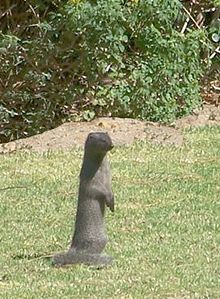 The Cape grey mongoose is diurnal. When not breeding it is solitary, but litter remains together in a family party at least until late adolescence. They live in overlapping home ranges of 5-68 ha, with the males having larger ranges than the females. However, it is not entirely clear whether this species is territorial or not, or whether it might be more social than generally believed. Poor diggers, they utilize piles of rocks, crevices, deserted burrows and hollows in tree trunks for shelter when there is not sufficient bush cover. They are often spotted by humans when they cross roads.

Litters of 1 – 3 young are born from August to December and hidden in burrows, rock crevices or tree hollows. At birth the pups are fully furred, but their eyes and ears are closed, opening after about a fortnight. The young remain in the breeding burrow until they are fully weaned, and leave when they are capable of independence.