The jaguarundi or eyra cat (Puma yagouaroundi), is a small, wild cat native to Central and South America. In 2002, the IUCN classified the jaguarundi as Least Concern, although they considered it likely that no conservation units beyond the megareserves of the Amazon Basin could sustain long-term viable populations. Its presence in Uruguay is uncertain.[2]

In some Spanish-speaking countries, the jaguarundi is also called gato colorado, gato moro, león brenero, onza, tigrillo, and leoncillo.[2] The Brazilian Portuguese pronunciation of its common English and Portuguese name is Template:IPA-pt. It is also called gato-mourisco, eirá, gato-preto, and maracajá-preto in Portuguese. Jaguarundi comes from Old Tupi yawaum'di.[4] 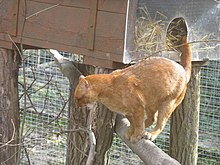 The two color phases were once thought to represent two distinct species: the grey one called jaguarundi /ˌʒæɡwəˈrʌndi/ ZHAG-wə-RUN-dee,[8] and the red one called eyra.

The jaguarundi is found from southern Texas and coastal Mexico in the north, through Central and South America east of the Andes, and as far south as northern Argentina. Its habitat is lowland brush areas close to a source of running water, and may include any habitat from dry thorn forest to wet grassland. While commonly found in the lowlands, they have been reported at elevations as high as 3,200 m (10,500 ft).[5] Jaguarundis also occasionally inhabit dense tropical areas.

Jaguarundis have also been sighted in the US state of Florida since the early 20th century. Here, the species is thought to have been introduced, but it is not known when the introduction occurred. Their presence in Florida is said to have been the work of a writer who at some point imported the animals from their native habitat and released them near his hometown of Chiefland and in other locations across the state. No live or dead specimens have been found, but many sightings considered credible by biologists have been reported. The earliest of these occurred in 1907, and was followed by various additional sightings throughout the Florida Peninsula from the 1930s through the 1950s. The first official report was released in 1942. Significantly fewer reliable sightings were reported after that, and by 1977, W. T. Neill concluded the population had declined; however, sightings have continued. Sightings of jaguarundis in the coastal area of Alabama also have been made. This may be evidence of the Florida population migrating northward.[9]

The jaguarundi has also been sighted around the Guiana Space Centre in French Guiana.[10] 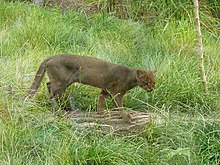 Jaguarundis are primarily diurnal, being active during the day rather than evenings or night. They are comfortable in trees, but prefer to hunt on the ground. They will eat almost any small animal they can catch, typically catching a mixture of rodents, small reptiles, and ground-feeding birds. They have also been observed to kill larger prey, such as rabbits, and opossums; relatively unusual prey include fish and even marmosets. Like many other cats, they also include a small amount of vegetation and arthropods in their diets.[5]

Although they seem to be somewhat more gregarious than many other cats, willing to tolerate the close presence of other members of their species, in the wild, they are generally encountered alone, suggesting a solitary lifestyle. Their home range is widely variable, depending on the local environment; individuals have been reported as ranging over territories from 6.8 to 100 km2 (2.6 to 38.6 sq mi). Like other cats, they scent mark their territory by scratching the ground or nearby branches, head-rubbing, urination, and leaving their faeces uncovered.[5] They are shy and reclusive, and evidently very cautious of traps.[9]

Jaguarundis make an unusually wide range of vocalisations, including purrs, whistles, yaps, chattering sounds, and even a bird-like chirp.[5]

The timing of the breeding season among jaguarundis is unclear; they breed all year round. Oestrus lasts three to five days, marked by the female regularly rolling onto her back and spraying urine. After a gestation period of 70 to 75 days, the female gives birth to a litter of one to four kittens in a den constructed in a dense thicket, hollow tree, or similar cover.[5]

The kittens are born with spots on their undersides, which disappear as they age. The young are capable of taking solid food at around six weeks, although they begin to play with their mother's food as early as three weeks. Jaguarundis become sexually mature at about two years of age, and have lived for up to 10 years in captivity.[5]

Jaguarundis are not particularly sought after for their fur, but are suffering decline due to loss of habitat. The Texas Parks and Wildlife Department has expressed concern that the presence of the jaguarundi in South Texas may be imperiled due to loss of the cat's native habitat.[11] 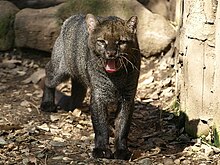 According to a 2006 genomic study of Felidae, an ancestor of today's Leopardus, Lynx, Puma, Prionailurus, and Felis lineages migrated across the Bering land bridge into the Americas about 8.0 to 8.5 million years ago. The lineages subsequently diverged in that order.[12]

Studies have indicated the cougar and jaguarundi are next most closely related to the modern cheetah of Africa and western Asia,[12][13] but the relationship is unresolved. Ancestors of the cheetah have been suggested to have diverged from the Puma lineage in the Americas and migrated back to Asia and Africa,[12][13] while other research suggests the cheetah diverged in the Old World itself.[14] The outline of small feline migration to the Americas is thus unclear (see also American cheetah).