The Galápagos sea lion (Zalophus wollebaeki) is a species of sea lion that exclusively breeds on the Galápagos Islands and – in smaller numbers – on Isla de la Plata (Ecuador). Being fairly social, and one of the most numerous species in the Galápagos archipelago, they are often spotted sun-bathing on sandy shores or rock groups or gliding gracefully through the surf. Their loud bark, playful nature, and graceful agility in water make them the "welcoming party" of the islands.

This species was first described by E. Sivertsen in 1953. This species has been considered a subspecies of Zalophus californianus (called Z. c. wollebaeki) by many authors. But recent genetic data supports the Z. wollebaeki to be a separate species.[1] The species belongs to the family Otariidae and genus Zalophus.

Slightly smaller than their Californian relatives, Galápagos sea lions range from 150 to 250 cm (59 to 98 in) in length and weigh between 50 to 250 kg (110 to 550 lb), with the males averaging larger than females.[2] Adult males also tend to have a thicker, more robust neck, chest, and shoulders in comparison to their slender abdomen. Females are somewhat opposite males, with a longer, more slender neck and thick torso. Once sexually mature, a male’s sagittal crest enlarges, forming a small, characteristic bump-like projection on their forehead. Galápagos sea lions, compared to California sea lions, have a slightly smaller sagittal crest and a shorter muzzle.[3] Adult females and juveniles lack this physical characteristic altogether with a nearly flat head and little or no forehead.

Both male and female sea lions have a pointy, whiskered nose and somewhat long, narrow muzzle. The young pups are almost dog-like in profile. Another characteristic that defines the sea lion are their external ear-like pinnae flaps which distinguish them from their close relative with which they are often confused, the seal. The foreflippers have a short fur extending from the wrist to the middle of the dorsal fin surface, but other than that, the flippers are covered in black, leathery skin. Curving posteriorly, the first digit of the flipper is the largest, giving it a swept-back look. At the end of each digit is a claw, usually reduced to a vestigial nodule that rarely emerges above the skin. Although somewhat clumsy on land with their flippers, sea lions are amazingly agile in water. With their streamlined bodies and flipper-like feet, they easily propel themselves through crashing surf and dangerously sharp coastal rocks. They also have the ability to control their flippers independently and thus change directions with ease, and they have more control over their body on land.

When wet, sea lions are a shade of dark brown, but once dry, their color varies greatly. The females tend to be a lighter shade than the males and the pups a chestnut brown. Born with a longer, brownish-black lanugo, a pup's coat gradually fades to brown within the first five months of life. At this time, they undergo their first molt, resulting in their adult coat. The age of maturity for Galápagos sea lions is estimated at about 4–5 years.[4] The total life span of Galapagos Sea Lions is estimated to be at 15–24 years.[5]

Galápagos sea lions can be found on each of the different islands of the Galápagos archipelago. They have also colonized just offshore the mainland Ecuador at Isla de la Plata, and can be spotted from the Ecuadorian coast north to Isla Gorgona in Colombia. Records have also been made of sightings on Isla del Coco which is about 500 km southwest of Costa Rica. The population on Isla del Coco is thought to be a vagrant population, while the population in the Galápagos archipelago is considered native.[2]

Feeding mostly on sardines, Galápagos sea lions sometimes travel 10 to 15 kilometers from the coast over the span of days to hunt for their prey. This is when they come into contact with their biggest predators: sharks and killer whales. Injuries and scars from attacks are often visible. During el Niño events, which occurs when the water temperature changes and causes climate change in the Pacific,[6] more green-eyes and myctophids are consumed due to a decrease in sardine population. El Nino caused many population decreases by changing the sea lion's availability for food, causing these Galapagos Sea Lions to be listed as endangered.[6] 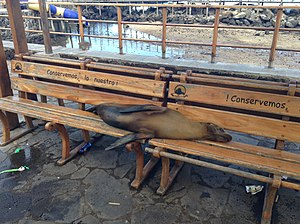 Galápagos sea lions are especially vulnerable to human activity. Their inquisitive and social nature makes them more likely to approach areas inhabited by humans, and thus come into contact with human waste, fishing nets, and hooks. They occupy many different shoreline types, from steep, rocky cliff sides to low-lying sandy beaches. To avoid overheating during the day, sea lions will take refuge from the sun under vegetation, rocks, and cliffs.

Not only are sea lions social, they are also quite vocal. Adult males often bark in long, loud and distinctive repeated sequences. Females and juveniles do not produce this repetitive bark, but both sexes the younger pups will growl. From birth, a mother sea lion recognizes her pup’s distinct bark and can pinpoint it from a crowd of 30 or more barking sea lions.

On land, sea lions form colonies at their hauling-out areas. Adult males, bulls, are the head of the colony, growing up to 7 ft (2;m) long and weighing up to 800 pounds (360 kg). As males grow larger, they fight to win dominance of a harem of between five and 25 cows, and the surrounding territory. Swimming from border to border of his colony, the dominant bull jealously defends his coastline against all other adult males. While patrolling his area, he frequently rears his head out of the water and barks, as an indication of his territorial ownership. The neighboring territorial males tend to display a “dear enemy effect”, where territorial males decrease vocalization and aggression.Through repetitive encounters with other territorial bulls, males displayed reduced aggression and stored key information about a neighbor’s strength as an adversary.

The average dominant bull holds his territory for only a few months, until he is challenged by another male. On land, these fights start by two bulls stretching out their necks and barking in attempt to test each other’s bravery. If this is not enough to scare the opponent off, they begin pushing each other and biting around the neck area. If males were not equipped with thick, muscular necks, their vital organs would be easily damaged during these fights. Blood is often drawn, however, and many male sea lions have battle scars due to these territorial competitions. Losers are dramatically chased far from their territory by the new dominant bull with much splashing.

Because there is only one male in each harem, there is always a surplus of “bachelor” male sea lions. They usually congregate fairly peaceably on less favorable areas of the coastline in “bachelor colonies”. One of the most commonly known is atop the cliffs of the South Plaza Island of the Galápagos chain. Because the dominant male of the harem cannot feed while defending his colony, he eventually becomes too tired and weak, and is overpowered by a well-nourished, fresh bull.The territorial males that lose their territory but decide to stay on the island tend to vocalize less and have a lowered fighting ability, due to fasting.

Breeding takes place from May through January. Because of this prolonged breeding season and the extensive care required by the pups from their mother, there are dependent pups in the colonies year round. Each cow in the harem has a single pup born a year after conception. After about a week of continuous attention from birth, the female returns to the ocean and begins to forage, and just a week after that, the pup will follow her and begin to develop its swimming skills. When the pup is two to three weeks old, the cow will mate again. The mothers will take the young pups with them into the water while nursing until around the 11th month, when the pups are weaned from their mother’s milk and become dependent on their own hunting skill.

The static and social interaction between mother-offspring pairs is a central social unit in most mammalian groups, as well as these sea lions.[7] The cow will nurture a pup for up to three years. In that time, the cow and the pup will recognize each other's bark from the rest of the colony. Within the colony, sea lion pups live together in a rookery. Pups can be seen together napping, playing, and feeding. It is not uncommon to see one cow 'baby-sitting' a group of pups while the other cows go off to feed.

Many mammals synchronize their pregnancies to insure a greater infant survival rate, but not the Zalophus Wollebaeki.[8] The Zalophus Wollebaeki is different from most mammals since they do not synchronize, which can be a major reason why they are becoming extinct.[8] Higher infant mortality rate is the effect caused by the lack of synchrony between the mother sea lions. Plausible reasons for this low synchrony could be the absence of strong photoperiodic change throughout the year, which is thought to regulate embryonic diapause, or adaptation to an environment with variable productivity and prey availability, or both.[8]

The majority of the Galápagos population is protected, as the islands are a part of the Ecuadorian National Park surrounded by a marine resources reserve. Although the Galápagos Islands are a popular tourist destination, strict rules protect all wildlife from disturbance. Fluctuating between 20,000 and 50,000 sea lions, the population does have a few threats. During el Niño events, the population tends to decrease due to die-offs, cessation of reproduction, and collapses in marine life on which the seals are dependent. Sharks and killer whales are the main predators to the sea lion.