The crab-eating mongoose (Herpestes urva) is a mongoose species ranging from the northeastern Indian subcontinent to Southeast Asia, southern China and Taiwan. 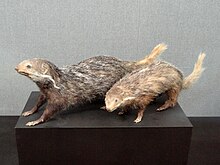 H. urva is generally grey in color, with a broad white stripe on its neck extending from its cheeks to its chest. Its throat is steel-gray with white ends of its hair, rendering a salt and pepper appearance. Its hind feet possess hairy soles. Its tail is short and homogeneously colored with a fairer tip. The body of the crab-eating mongoose is 36–52 cm (14–20 in) in length, and 1–2.3 kg (2.2–5.1 lb) in weight.[3]

Crab-eating mongooses are common in Vietnam, Laos, Cambodia, Thailand, Peninsular Malaysia, northern Myanmar and northeastern India. They are rare in Bangladesh.[2] In Nepal, this species inhabits subtropical evergreen and moist deciduous forests, and has also been observed on agricultural land near human settlements.[4]

Crab-eating mongooses are usually active in the mornings and evenings, and were observed in groups of up to four individuals. They are supposed to be good swimmers, and hunt along the banks of streams and close to water.[5]

Despite their common name, their diet consists not only of crabs, but also just about anything else they can catch, including fish, snails, frogs, rodents, birds, reptiles, and insects.[4]

Herpestes urva is listed in CITES Appendix III.[2] It is listed as Least Concern by the IUCN.[2]