The Australian sea lion is a pinniped, most closely related to other species of sea lions and fur seals in the family Otariidae.

The breeding cycle of the Australian sea lion is unusual within the pinniped family. It is an 18-month cycle and is 'not' synchronised between colonies. The duration of the breeding season can range from five to seven months and has been recorded for up to nine months at Seal Bay on Kangaroo Island.

Bulls do not have fixed territories during the breeding season. The males fight other males from a very young age to establish their individual positions in the male hierarchy and during the breeding season, dominant males will guard females for the right to breed with her when she comes into oestrus. A female comes into season for about 24 hours within 7 to 10 days after she has given birth to her new pup. She will only look after the new pup and generally fights off the previous season's pup if it attempts to continue to suckle from her. Male Australian sea lions are also known to kill young as an act of defence of territory.

Australian sea lions also practice alloparental care, in which an adult may adopt the pup or pups of another. This might take place if the original parents die or are for some reason separated from them. This behavior is common and is seen in many other animal species such as the elephant and fathead minnow.[2] 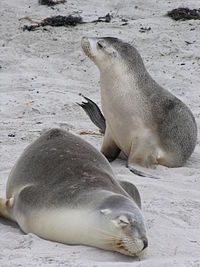 About 14,730 Australian sea lions remain.[3] This number is thought to be stable or slightly decreasing.[4] The Australian sea lion population is struggling due to their long and complicated breeding cycle, high site fidelity of females, and high mortality.

Sea lions were heavily hunted following European settlement, greatly reducing their numbers. Large-scale hunting ceased in the 1920s,[4] with harvesting being banned with the introduction of the South Australian National Parks and Wildlife Act 1972 which prohibited a harvest.

The Australian sea lion was listed as vulnerable under the Commonwealth Environment Protection and Biodiversity Conservation Act 1999 in 2005 and is also listed as a threatened species in each state in its range (South Australia and Western Australia). On 11 June 2013, the Recovery Plan for the Australian Sea Lion (Neophoca cinerea) was adopted by the Minister for Sustainability, Environment, Water, Population and Communities. The plan considers the conservation requirements of the species across its range and identifies the actions to be taken to ensure its long-term viability in nature and the parties that will undertake those actions.[5][6]

The Australian Fisheries Management Authority Commission has also finalised the Australian Sea Lion Management Strategy which came into force on 30 June 2010 which includes closures of waters around colonies, seasonal closures, increased observation of sea lion activity and trials of modified fishing techniques and equipment. The strategy is designed to meet the commission’s obligations under the Fisheries Management Act 1991 and the Environment Protection and Biodiversity Conservation Act 1999. The strategy will significantly reduce the impact of fishing in the SESSF on Australian sea lions and enable the recovery of the species, including all subpopulations.[7]