The Baikal seal, Lake Baikal seal, or nerpa (Pusa sibirica), is a species of earless seal endemic to Lake Baikal in Siberia, Russia. Like the Caspian seal, it is related to the Arctic ringed seal. The Baikal seal is one of the smallest true seals and the only exclusively freshwater pinniped species.[2] A subpopulation of inland harbour seals living in the Hudson's Bay region of Quebec, Canada (lac de loups marins harbour seals), the Saimaa ringed seal (a ringed seal subspecies) and the Ladoga seal (a ringed seal subspecies) are found in fresh water, but these are part of species that also have marine populations.[2] It remains a scientific mystery how the seals originally came to Lake Baikal, hundreds of kilometers from any ocean.

The most recent population estimates are 80,000-100,000 animals, roughly equaling the expected carrying capacity of the lake.[1] At present, the species is not considered threatened, despite hunting (both legal and illegal) and heavy pollution of the lake.[1] The most serious future threat may be global warming, which has the potential to seriously affect a closed cold-water ecosystem such as Lake Baikal.[1]

The Baikal seal is one of the smallest true seals. Adults grow to around 1.3 m (4 ft 3 in) in length with a body mass from 63 to 70 kg (139 to 154 lb).[4] The animals show very little sexual dimorphism; males are only slightly larger than females.[4] They have a uniform, steely-grey coat on their backs and fur with a yellowish tinge on their abdomens. As the coat weathers, it becomes brownish.[3] When first born, pups weigh around 4.5 kg (9.9 lb) and have coats of white, silky, natal fur. This fur is quickly shed and exchanged for a darker coat, much like that of adults. Rarely, Baikal seals can be found with spotted coats.[4] Template:Wide image

The Baikal seal lives only in the waters of Lake Baikal.[5] It is something of a mystery how Baikal seals came to live there in the first place. They may have swum up rivers and streams or possibly Lake Baikal was linked to the ocean at some point through a large body of water, such as the West Siberian Glacial Lake or West Siberian Plain, formed in a previous ice age. The seals are estimated to have inhabited Lake Baikal for some two million years.[6] The Baikal seal, the Saimaa ringed seal (Pusa hispida saimensis), and the Ladoga seal (Pusa hispida ladogensis) are the only exclusively freshwater seals.

The areas of the lake in which the Baikal seals reside change depending on the season, as well as some other environmental factors. They are solitary animals for the majority of the year, sometimes living kilometers away from other Baikal seals. In general, a higher concentration of Baikal seals is found in the northern parts of the lake, because the longer winter keeps the ice frozen longer, which is preferable for pupping.[3] However, in recent years, migrations to the southern half of the lake have occurred, possibly to evade hunters.[4] In winter, when the lake is frozen over, seals maintain a few breathing holes over a given area and tend to remain nearby, not interfering with the food supplies of nearby seals. When the ice begins to melt, Baikal seals tend to keep to the shoreline. 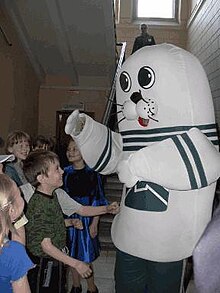 A Baikal seal costume at the Nerpa Festival in Irkutsk, Baikal region, Russia

As of 2008, the Baikal seal is listed as a Least Concern species on conservation lists.[1] This means that they are not currently threatened or endangered. In 1994, the Russian government estimated that they numbered 104,000. In 2000, Greenpeace performed its own count and found an estimated 55,000 to 65,000 seals.[5] The most recent estimates are 80,000-100,000 animals, roughly equaling the carrying capacity of the lake.[1]

In the last century, the kill quota for hunting Baikal seals was raised several times, most notably after the fur industry boomed in the late 1970s and when official counts began indicating more Baikal seals were present than previously known.[3] The quota in 1999, 6,000, was lowered in 2000 to 3,500, which is still nearly 5% of the population if the Greenpeace count is correct.[4] In addition, new techniques, such as netting breathing holes and seal dens to catch pups, have been introduced. One prime seal pelt will bring 1,000 rubles at market.[5] In 2004-2006, about 2,000 seals were killed per year according to official Russian statistics, but another 1,500-4,000 are thought to die annually due to drowning in fishing gear, poaching, and the like.[1]

Lake Baikal has eight wildlife patrol officers, which amounts to one officer for roughly 2,500 square kilometers, making enforcement of regulations difficult. Even without poaching, hunting, even on a small scale, is a problem, because many of the seals that are shot or injured still escape and die later.[citation needed] These do not fall under the kill quota and are added after. Poaching and hunting are unlikely to slow considerably without government intervention.[citation needed]

Another problem at Lake Baikal is the introduction of pollutants into the ecosystem. Pesticides such as DDT and hexachlorocyclohexane, as well as industrial waste, mainly from the Baikalisk pulp and paper plant, are thought to have been the cause of several disease epidemics among Baikal seal populations. The chemicals are speculated to concentrate up the food chain and weaken the Baikal seal's immune system, making them susceptible to diseases such as canine distemper and the plague, which was the cause of a serious Baikal seal epidemic that resulted in the deaths of thousands of animals in 1997 and 1999.[4] Baikal seal pups have higher levels of DDT and PCB than known in any other population of European or Arctic earless seal.[1]

The most serious future threat to the survival of the seal may be global warming, which has the potential to seriously affect a closed cold-water ecosystem such as that of Lake Baikal.[1]

The only known natural predator of this seal is the brown bear, but this is not believed to occur frequently.[1]

Female Baikal seals reach sexual maturity at 3–6 years of age, whereas males achieve it around 4–7 years.[4] The males and females are not strongly sexually dimorphic; this fact, compounded by their poor vision and the further optical distortions produced by cold water, occasionally leads males to mistakenly attempt to copulate with other males, a behavior formerly erroneously interpreted by ethologists as homosexual. Baikal seals mate in the water towards the end of the pupping season. With a combination of delayed implantation and a nine-month gestation period, the Baikal seals' overall pregnancy is around 11 months. Pregnant females are the only Baikal seals to haul out during the winter. The males tend to stay in the water, under the ice, all winter. Females usually give birth to one pup, but they are one of only two species of true seals with the ability to give birth to twins. The twins often stick together for some time after being weaned. The females, after giving birth to their pups on the ice in late winter, become immediately impregnated again, and often are lactating while pregnant.

Baikal seals are slightly polygamous and slightly territorial, although not particularly defensive of their territory. Males mate with around three females if given the chance. They then mark the female’s den with a strong, musky odor, which can be smelled by another male if he approaches. The female raises the pups on her own; she digs them a fairly large den under the ice, up to 5 m (16 ft) in length, and more than 2 m (6 ft) wide. Pups as young as two days old then further expand this den by digging a maze of tunnels around the den. Since the pup avoids breaking the surface with these tunnels, this activity is thought to be mainly for exercise, to keep warm until they have built up an insulating layer of blubber.

The mother Baikal seal feeds her young for around 2.5 months, nearly twice as long as any other seal. During this time, the pups can increase their birth weight (around 4 kg {9 lb}) five-fold. After the pups are weaned, the mother introduces them to solid food, bringing shrimp, fish, and other food into the den.

In spring, when the ice melts and the dens usually collapse, the pup is left to fend for itself. Growth continues until they are 20 to 25 years old.

Every year in the late winter and spring, both sexes haul themselves out and begin to moult their coat from the previous year, which is replaced with new fur. While moulting, they refrain from eating and enter a lethargic state, during which time they often die of overheating, males especially, from lying on the ice too long in the sun.[3] During the spring and summer, groups as large as 500 can form on the ice floes and shores of Lake Baikal. Baikal seals can live to over 50 years old, exceptionally old for a seal, although they are presumed to be fertile only until they are around 40.[3]

Their main food source is the golomyanka, found only in Lake Baikal. Baikal seals eat more than half of the annual produced biomass of golomyanka, some 64,000 tons.[3] They also eat some types of invertebrates,[3] and the occasional omul. They feed mainly at night, when fish come within 100 m (330 ft) of the surface. They feed during 10-20 minute dives, although this is hardly the extent of their submarine abilities. Baikal seals have two litres more blood than any other seal of their size and can stay underwater for up to 70 minutes if they are frightened or need to escape danger.

The Baikal seal has been blamed for drops in omul numbers, but this is not the case. The omul’s main competitor is the golomyanka and by eating tons of these fish a year, Baikal seals cut down on the omul’s competition for resources.[3]

Baikal seals have one unusual foraging habit. In early autumn, before the entire lake freezes over, they migrate to bays and coves and hunt sculpin, a fish that lives in silty areas and, as a result, usually contains grit and silt in its digestive system. This grit scours the seals' gastrointestinal tracts and expels parasites.[3]