The masked palm civet or gem-faced civet (Paguma larvata) is a civet species native to the Indian Subcontinent and Southeast Asia. It is classified by IUCN in 2008 as Least Concern as it occurs in many protected areas, is tolerant to some degree of habitat modification, and widely distributed with presumed large populations that are unlikely to be declining.[2]

The genus Paguma was first named and described by John Edward Gray in 1831. All described forms are regarded as a single species.[3]

In recent times, masked palm civets were considered to be a likely vector of SARS.[4]

In morphology the masked palm civet resembles other civets. Unlike most civets though, its orange-brown to gray fur completely lacks spots, stripes, and other patterns besides a mask.

That mask consists of a prominent white stripe stretching from nose to forehead (sometimes extends farther but has greatly reduced thickness) that halves a black mask that extends laterally to the far edges of the cheeks and caudally up the forehead, past the ears, and down the back of the neck before stopping just under the shoulder blades. The eyes are surrounded by white fur that can vary from faint, incomplete outlines to well-defined blotches. The lips, chin, and throat are white. In some, white stripes of fur, comparable to sideburns on humans due to shape and location, curve up from the throat. These curves vary in thickness and have ends that terminate either in small blotches at the ear base or large blotches that surround the base of both darkly furred ears.

No matter which coat it sports, masked palm civet's feet are always dark, often black, and the melanism usually extends partway up the legs in varying distances and intensities depending on the individual. The end of a masked palm civet's tail is sometimes darker than the majority of its coat. This difference in pigmentation can vary from a few shades darker than its coat to solid black and can cover a fourth to half of the tail.

Masked palm civet are distributed from China, Vietnam, Laos, Cambodia, Peninsular Malaysia, Thailand, Myanmar to northern India. They are also found on Borneo, Sumatra, Taiwan, and the Andaman and Nicobar islands. [2] They have been recorded in both evergreen and deciduous forest, and in disturbed habitat.[5]

It is unclear whether they are a native to the Japanese islands or were introduced by humans.[6]

The masked palm civet is a nocturnal solitary predator that is occasionally active during the day.[5][7][8] It is partly arboreal.[9]

The masked palm civet is an omnivore feeding on rats and birds as well as on fruit such as figs, mangoes, bananas, and leaves.[9] Scat analysis indicates that they also eat mollusks, arthropods, bark and to a lesser extent snakes and frogs. The composition of the diet varies between seasons and sites.[10]

There are two breeding seasons per year. The female bears up to four young. Masked palm civets are known to reach 15 years of age in captivity.[9]

Upon completion of copulation, males leave a copulation plug in the female's vaginal tract. The young grow to the size of an adult in about three months.[11] 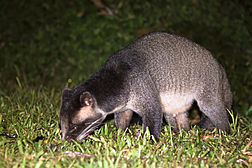 The major threats for the masked palm civet are continued habitat destruction and hunting for bushmeat. However, it can also live in fragmented forest habitats, albeit at reduced density, and its semi-arboreal lifestyle makes it less vulnerable to hunting than ground-dwelling carnivores.[2]

Paguma larvata is protected in Malaysia and Thailand. The population of India is listed on CITES Appendix III.[2] In Hong Kong, it is a protected species under Wild Animals Protection Ordinance Cap 170.

In parts of China masked palm civets are hunted for their meat and eaten. Inadequate preparation of the meat may have been the cause for the outbreak of SARS.[4] In May 2003, the SARS virus was isolated in several masked palm civets found in a live-animal market in Guangdong, China. Evidence of virus infection was also detected in other animals including a raccoon dog, and in humans working at the same market.[12]

In 2006, scientists from the Chinese Centre for Disease Control and Prevention of the University of Hong Kong and the Guangzhou Centre for Disease Control and Prevention established a direct genetic link between the SARS coronavirus appearing in civets and humans, bearing out claims that the disease had jumped across species.[13]

A later study revealed that the sequences of many SARS genomes show that the civets' cases of SARS were just one part of the family tree of SARS viruses in humans — probably humans got SARS from bats, then humans gave it to pigs once and to small civets once, and then these small carnivores may have given the disease back to humans once or twice. All the cases of SARS associated with the outbreak appeared to be part of the bat branch of the coronavirus phylogeny.[14]

This article incorporates information from the German Wikipedia.