The bush dog (Speothos venaticus) is a canid found in Central and South America.[1][2] In spite of its extensive range, it is very rare in most areas except in Suriname, Guyana, and Peru;[2][3] it was first identified by Peter Wilhelm Lund as fossils in Brazilian caves and believed to be extinct. The bush dog is the only living species in the genus Speothos,[1] and genetic evidence suggests that its closest living relative is the maned wolf of central South America.[4]

The teeth are adapted for its carnivorous habits, and uniquely for an American canid, the dental formula is Template:Dentition2 for a total of 38 teeth.[3] The bush dog is one of three canid species[citation needed] with trenchant heel dentition, having a single cusp on the talonid of the lower carnassial tooth that increases the cutting blade length.[3] Females have four pairs of teats, and both sexes have large scent glands either side of the anus.[3] Bush dogs have partially webbed toes, which allow them to swim more efficiently.[6] 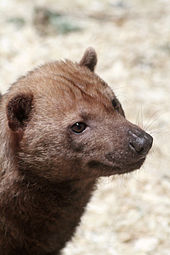 Bush dogs are found from Panama in Central America, through much of South America east of the Andes, as far south as central Bolivia, Paraguay, and southern Brazil. They primarily inhabit lowland forests up to 1,900 metres (6,200 ft) elevation,[3] wet savannas, and other habitats near rivers, but may also be found in drier cerrado and open pasture.[2] The historic range of this species may have extended as far north as Costa Rica where the species may still survive in suitable habitat.[2][7][8] The current known range of this species extends as far north as western Panama (north of the Canal Zone), including recent sightings in the Fortuna (Forest Preserve) area in western Panama, the Bayano region, and the Panama Canal area.[9]

There are three recognised subspecies:[1][3]

Bush dogs are carnivores and hunt during the day. Their typical prey are pacas, agouti, and capybaras, all large rodents. Although they can hunt alone, bush dogs are usually found in small packs. The dogs can bring down much larger prey, including peccaries and rheas, and a pack of six dogs has even been reported hunting a 250 kg (550 lb) tapir. When hunting paca, part of the pack chases it on land, and part wait for it in the water, where it often retreats.[3]

Bush dogs appear to be the most gregarious South American canid species. They use hollow logs and cavities such as armadillo burrows for shelter. Packs consist of a single mated pair and their immediate kin, and have a home range of 3.8 to 10 square kilometres (1.5 to 3.9 sq mi)[3] Only the adult pair breed, while the other members of the pack are subordinate, and help with rearing and guarding any pups.[10] Pack-mates keep in contact with frequent whines, perhaps because visibility is poor in the undergrowth where they typically hunt.[11] While eating large prey, parents position themselves at either ends of the animal, making it easier for the pups to disembowel it.[3] 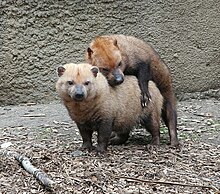 Bush dogs mate throughout the year; oestrus lasts up to twelve days, and occurs every 15 to 44 days.[12] Like many other canids, bush dog mating includes a copulatory tie, during which the animals are locked together.[12]

Gestation lasts from 65 to 83 days, and normally results in the birth of a litter of three to six pups, although larger litters of up to ten have been reported.[3] The young are born blind and helpless, and initially weigh 125 to 190 grams (4.4 to 6.7 oz). The eyes open after fourteen to nineteen days, and the pups first emerge from the nativity den shortly thereafter.[3] The young are weaned at around four weeks, and reach sexual maturity at one year.[13] They live for up to ten years in captivity.[3]