The culpeo (Lycalopex culpaeus), sometimes known as the zorro culpeo or Andean fox (wolf), is a South American species of wild dog. It is the second largest native canid on the continent, after the maned wolf. In its appearance it bears many similarities to the widely recognized red fox. It has grey and reddish fur, a white chin, reddish legs, and a stripe on its back that may be barely visible.

The culpeo's diet consists largely of rodents, rabbits, birds and lizards, and to a lesser extent, plant material and carrion. The culpeo does attack sheep on occasion, and is therefore often hunted or poisoned.[2] In some regions it has become rare, but overall the species is not threatened with extinction.

The culpeo was domesticated to form the Fuegian dog, but this became extinct some time between 1880 and 1919. 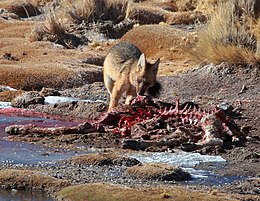 Its distribution extends from Ecuador and Peru to the southern regions of Patagonia and Tierra del Fuego. Some populations live in southern regions of Colombia. It is most common on the western slopes of the Andes, where it inhabits open country and deciduous forests. Populations of the culpeo are also found in some of the westernmost of the Falkland Islands, where they were introduced by humans.

The culpeo fox is an opportunistic predator that will take any variety of prey. This fox mainly feeds on rodents, lagomorphs (especially the introduced European rabbit and European hare) and occasionally feed on domestic livestock, and young guanacos.[5] Culpeos are considered beneficial because they are significant predators of the rabbits introduced in 1915; such introduced rabbit populations are believed to have allowed culpeos to spread from the Andean foothills across the Patagonian plain.[6] They sometimes take young lambs a week old and younger. In limited studies, the larger culpeo appears to dominate potential competitors, including South American gray foxes, Geoffroy's cats, Pampas cats, grisons and various raptorial birds.[4] Its range also overlaps that of the much larger puma, but the size difference ensures that the two species have limited competition.

The culpeo lives in a wide variety of habitats of western South America. They are found in broadleaf Nothofagus temperate rainforest, sclerophyllous matorral, deserts, and high plateaus, like the Altiplano, up to the tree line (4800 m).[1]

The typical mating period is between August and October. After a gestation period of 55–60 days, the female gives birth to cubs. The females usually give birth to 2-5 pups among the rocks.

This canid, like other South American foxes, is still sometimes classified as a member of the genus Pseudalopex.[1] As Pseudalopex and Lycalopex have largely come to describe the same genus, either classification is acceptable, although modern practice is to give Lycalopex prominence.[8]