The Canada lynx (Lynx canadensis) or Canadian lynx is a North American mammal of the cat family, Felidae. With the recognised subspecies, it ranges across Canada and into Alaska as well as some parts of the northern United States.

With a dense silvery-brown coat, ruffed face and tufted ears, the Canada lynx resembles the other species of the mid-sized Lynx genus. It is slightly larger than the bobcat, with which it shares parts of its range, and over twice the size of the domestic cat.

There had been debates over whether to classify this species as Lynx canadensis or Felis canadensis, part of a wider issue regarding whether each species of lynx should be given their own genus, or be placed as a subgenus of Felis,[4][5] but the Lynx genus is now accepted. Johnson et al. report that Lynx shared a clade with the Puma, leopard cat (Prionailurus bengalensis), and domestic cat (Felis) lineages, dated to 7.15 Ma; Lynx diverged first, approximately 3.24 Ma.[6]

Three subspecies of the Canada lynx are currently recognised: 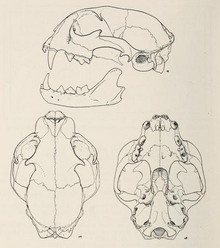 The appearance of the Canada lynx is similar to that of the Eurasian lynx: the dense fur is silvery brown and may bear blackish markings. In summer, its coat takes on a more reddish brown color. It has a furry ruff which resembles a double-pointed beard, a short tail with a black tip, and long furry tufts on its ears. Its long legs with broad furred feet aid in traveling through deep snow.

Like all lynx, it has 28 teeth, with four long canines for puncturing and gripping. The lynx can feel where it is biting the prey with its canines because they are heavily laced with nerves. The lynx also has four carnassials that cut the meat into small pieces. In order for the lynx to use its carnassials, it must chew the meat with its head to its side. There are large spaces between the four canines and the rest of the teeth, and a reduced number of premolars, to ensure that the bite goes as deeply as possible into the prey.[9]

Adaptations that lynx have for manoeuvering through the deep snow are feet with a large gap between the first and second toes and their big toe set at a wide angle which gives them a better vicelike grip on the snow.

Canada lynxes are secretive and mostly nocturnal animals, although they may be active at any time of day. They shelter in areas of particularly dense forest. In regions where their range overlaps with that of other predators, such as bobcats and coyotes, they tend to hunt in areas with deeper snow cover, or at higher altitudes. These cats tend to stay within 100 yards (91 m) of the treeline, but do not shy away from swimming. One account records a lynx swimming two miles across the Yukon River.[10]

Although normally solitary, at times small groups may be observed traveling together. The lynx roam about 2.5 to 5 km (1.6 to 3.1 mi) each day and therefore require a large territory. Typical home ranges are between 15 and 50 km2 (5.8 and 19.3 sq mi), but are highly variable, with extremes from 3 to 783 km2 (1.2 to 302.3 sq mi) having been reported. When food becomes scarce, the lynx territory will increase; most of the population will roam far, with a select few staying behind in their original territory.[11]

Like other cats, Canada lynx use scent marking to indicate their territory. Adults typically deposit faeces on top of the snow or on tree stumps and other prominent sites and frequently spray urine to mark their range.[11] They also use visual marks on trees.[12]

Canada lynx feed predominantly on snowshoe hares, which typically comprise 60% to 97% of their diet; as a result, the size of the lynx population tends to run parallel to the 10-year-long rise and decline of hare's numbers. However, especially in summer, they will also eat rodents and birds, and sometimes hunt larger prey such as deer. Like many cats, they will eat carrion when it is available.

Canada lynx use their large ears and eyes to seek out prey. They will hunt every one to two days and consume around 600 to 1,200 g (1.3 to 2.6 lb) of food per day. They hunt both by ambush and by actively seeking out prey, varying their tactics depending on the terrain and relative abundance of prey species.[11] Like other felids, lynx do not have stamina; whilst they are fast over short distances, they lack the ability to maintain their speed for more than a few dozen metres. If the lynx does not catch its prey within the first few seconds, it will generally give up the chase to conserve energy.[citation needed]

If the lynx kills or scavenges a larger animal that it cannot consume all in one sitting, it will drag it to a hiding area such as a bush or under a rock and then will cover the dead animal with leaves and return to consume it later. Such behaviour is particularly common when prey is abundant. If food is scarce and the lynx comes upon a large number of prey, it may go on a spree, killing as many prey as possible, then storing the kills.[citation needed]

Although Canada lynx are typically solitary hunters, females and kittens have been seen to hunt together in coordinated attacks. One lynx will scare the prey out of the hiding place, while the others are ready to attack a short distance away.[11]

The breeding season in Canada lynx lasts only for a month, ranging from March to May, depending on the local climate. Females come into oestrus only once during this period, lasting for three to five days.[11] The female attracts a mate by leaving some of her urine where the male has marked his territory, and by repeated calling. Mating can occur six times in one hour. The female lynx will only mate with one male each season, but the male may mate with multiple females.

Gestation lasts around 64 days, so that the young are born in May or early June. Before birth, the female prepares a maternal den, usually in very thick brush, and typically inside thickets of shrubs or trees or woody debris. The dens are generally situated mid-slope and face south or southwest.[13]

Litters contain from one to four kittens, and tend to be much larger when prey is abundant.[14] This suggests a greater degree of reproductive flexibility than in other cats, and females often do not mate at all when prey is scarce. When kittens are born in lean years, however, infant mortality may be as high as 95%.

Canada lynx kittens weigh from 175 to 235 g (6.2 to 8.3 oz) at birth, and initially have greyish buff fur with black markings. They are blind and helpless for the first fourteen days, and weaned at twelve weeks.[11] When their eyes open, they are a bright blue color, but as they mature, the eyes become a brown-hazel color. The mother brings the food to her kittens and allows them to play with it before eating it, thus training their hunting skills.

Kittens leave the den after about five weeks, and begin hunting at between seven and nine months of age. They leave the mother at around ten months, as the next breeding season begins, but do not reach the full adult size until around two years old. Female reach sexual maturity at ten months, although they often delay breeding for another year, while males reach maturity at two or three years. Canada lynx have been reported to live for up to fourteen years in captivity, although the lifespan is likely much shorter in the wild.[11]

The Canada lynx is found in northern and mixed forests across Canada and Alaska. It is, however, absent in the relatively treeless regions of the Great Plains and the northern coasts, which are outside the natural range of the snowshoe hare. Due to human activity, the Canada lynx is no longer found in Prince Edward Island or on the mainland of Nova Scotia,[11] although there are two known areas of Canada lynx populations in the Cape Breton Highlands.

In addition there are large populations of this lynx in Montana, Idaho, Washington, and Oregon and a resident population exists in Yellowstone National Park, Wyoming that extends into the Greater Yellowstone Ecosystem.[15] The Canada lynx is rare in Utah, Minnesota, and New England. The Canada lynx is a threatened species in the contiguous United States. It is also found in the Medicine Bow National Forest in Wyoming.

A Canadian lynx was shot near Newton Abbott in the United Kingdom in 1903 after attacking two dogs. The dead lynx was preserved by Bristol Museum and Art Gallery, and scientists identified it after analysis over a century later. They concluded that it had probably been captive for some time, perhaps as an exotic pet or part of a travelling menagerie, but may have survived for a substantial period after escaping. They considered it "the earliest recorded example of an exotic cat on the loose in the UK."[16]

Starting in 1999, the Colorado Division of Wildlife began a program reintroducing a wild lynx population of 96 back to Colorado. While showing early signs of promise, biologists say it will take more than a decade to determine whether the program is a success. However, in 2003 lynx den visits identified 16 native-born Colorado lynx and the next year, 39 new lynx kittens were identified: affirming the possibility of successful reintroduction.[17]

In 2007 several of these lynx were shot and killed by unknown persons. In some cases only the radio tracking collars were found, leading to suspicions of fur poaching, in other cases the animals were shot and the body left intact.[18]

By 2010, after an 11 year effort, it had been successfully reintroduced into Colorado where it had become extinct in the 1970s. The initial introduction was in the San Juan Mountains in southwestern Colorado but self-sustaining populations were established throughout the south-central Colorado Rockies as far north as Summit County by 2010. In Colorado the red squirrel is an important secondary food source when snowshoe hares are scarce.[19][20][21] Isolated individual lynx have wandered widely from the core area in the Southern Rockies where they were reintroduced resulting in observation of lynx introduced in Colorado as far away as Iowa, northern Idaho, and eastern Nevada. It was found helpful to rest and feed the animals well before releasing them in prime condition during the spring thaw.[22]

In northern Canada, the abundance of lynx can be estimated from the records kept of the number caught each year for their fur. Records have been kept by the Hudson's Bay Company and Canadian government since the 1730s.[23] A cycle of its abundance is characterised by huge rises and falls with the peaks occurring at a level typically ten times higher than the troughs and following about five years after them; the cycle then reverses.

This lynx is a specialist predator, eating snowshoe hare almost exclusively when they are available. The population variation of the lynx and the hare is an example of a predator-prey cycle. Environmental factors such as weather and forest plant growth that may affect this population variation have been studied.

The Canada lynx is trapped for its fur and has declined in many areas due to habitat loss, however, the IUCN lists them as a species of Least Concern.[2] On March 24, 2000, the U.S. Fish and Wildlife Service issued its Final Rule, which designated the Canada lynx a Threatened Species in the southern-most 48 states.[24][25] Canada lynx-bobcat hybrids have also been detected at the southern periphery of the current population range for lynx (Maine, Minnesota and New Brunswick)[26][27] which may limit their recovery in the south.