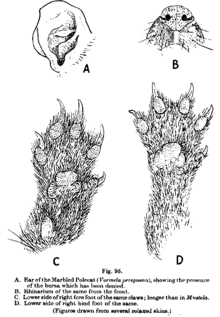 Paws, nose and ear, as illustrated in Pocock's The Fauna of British India, including Ceylon and Burma - Mammalia Vol 2 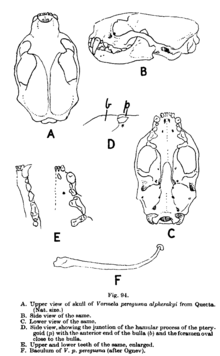 Skull and baculum, as illustrated in Pocock's The Fauna of British India, including Ceylon and Burma - Mammalia Vol 2

Ranging in length from 29–35 cm (head and body), the marbled polecat has a short muzzle and very large, noticeable ears. The limbs are short and claws are long and strong. While the tail is long, with long hair, the overall pelage is short. Black and white mark the face, with a black stripe across the eyes and white markings around the mouth. Dorsally, the pelage is yellow and heavily mottled with irregular reddish or brown spots. The tail is dark brown with a yellowish band in the midregion. The ventral region and limbs are a dark brown.[3] Females weigh from 295 to 600 g, and males can range from 320 to 715 g.[4][5][6]

Marbled polecats are most active during the morning and evening.[18][19][20] Their eyesight is weak and they rely on a well-developed sense of smell.[21] Vocalization is limited and consists of shrill alarm cries, grunts and a submissive long shriek.[22]

Marbled polecats are solitary and move extensively through their 0.5- to 0.6-km2 home range. They generally only stay in a shelter once. When they encounter each other, they are usually aggressive.[23]

To dig, such as when excavating dens, the marbled polecat digs out earth with its forelegs while anchoring itself with its chin and hind legs. It will use its teeth to pull out obstacles such as roots.[27]

Marbled polecats mate from March to early June.[28][29] Their mating calls are most often heard as low rumbling sounds in a slow rhythm. Gestation can be long and variable (243 days to 327 days).[30] Parturition has been observed to occur from late January to mid-March.[31][32] Delayed implantation allows marbled polecats to time the birth of their cubs for favorable conditions, such as when prey is abundant.[33]

Burrows of large ground squirrels or similar rodents such as the great gerbil (Rhombomys opinus) and Libyan jird are used by marbled polecats for resting and breeding. They may also dig their own dens or live in underground irrigation tunnels.[42][43] In the winter, marbled polecats will line their dens with grass.[44]

In 2008, V. peregusna was classified as a vulnerable species in the IUCN Red List due to a population reduction of at least 30% in the previous 10 years.[53] In 1996, it had been considered a species of least concern. The decline in marbled polecat populations thought to be due to habitat destruction (cultivation) and reduction in available prey by use of rodenticides.[54][55][56]

In Pakistan, it is listed as an endangered species.[citation needed] The marbled polecat was once sought for its fur, generally known as "fitch" or more specifically, "perwitsky" in the fur trade.[1][2]

In 1945, Kabul shopkeepers were reported to have kept marbled polecats to exterminate rodents. Their journals also show some developed an adverse reaction to the strong smell they emit when threatened. Side effects varied from fever to diarrhea.[57]

The subspecies of V. peregusna include: