The eastern spotted skunk (Spilogale putorius) is a small, relatively slender skunk found throughout the eastern United States and in small areas of Canada and Mexico.

They are much more active than any other type of skunk. They have mostly the same predators as any other skunk (big cats, bobcats, owls, humans, etc.). Up to eight skunks may share an underground den in the winter. They can also climb and take shelter in trees.[citation needed] 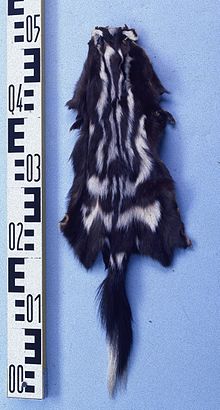 Spilogale putorius possess a small weasel-like body with fine, dense black fur that has 4 to 6 broken, white stripes.[6] Two of the stripes are located at the median of the body and four stripes are placed on the side running from the back of the head to the rear. White markings are present on both cheeks, as well as on the tip of the tail. This is known as an aposematic fur pattern and is thought to act as a warning to predators.

Eastern spotted skunks are quite secretive and crafty creatures, and it is a rarity for humans to see them. They are also nocturnal and tend to be more active during dry cool nights rather than warm wet nights. Although these skunks do not hibernate, they do tend to greatly reduce their activity when enduring intensely warm summers or very cold winters.[6] Generally speaking, out of the four species, S. putorius is the most active. They are also more agile and vigilant than the other skunks dwelling in North America.

In addition to performing a handstand before spraying a potential predator, the skunk also performs what foot stamping, which involves the skunk stamping its feet on the ground in order to warn an approaching predator. The stamping can be heard for several meters away and is usually followed by the skunk spraying its odorous solution. When these skunks encounter an egg that they want to eat they will straddle the egg with their front legs and bite the egg open. If this fails they will then proceed to use their front legs to push the egg back and kick it with one of their hind legs.[6]

Eastern spotted skunks breed mostly in the later winter months and give birth in late Spring to early Summer. On average the female skunk will give birth to 4–5 baby skunks (kits) at a time. It takes twelve weeks before newborn skunks will become fully developed into adult skunks and two months before they develop skunk musk to use as self-defense.