The fennec fox or fennec (Vulpes zerda) is a small nocturnal fox found in the Sahara of North Africa. Its most distinctive feature is its unusually large ears, which also serve to dissipate heat. Its name comes from the Arabic word فنك (fanak), which means fox, and the species name zerda comes from the Greek word xeros which means dry, referring to the fox's habitat.[2] The fennec is the smallest species of canid in the world. Its coat, ears, and kidney functions have adapted to high-temperature, low-water, desert environments. In addition, its hearing is sensitive enough to hear prey moving underground. It mainly eats insects, small mammals, and birds.

The fennec has a life span of up to 14 years in captivity. Its main predators are the African varieties of eagle owl. Families of fennecs dig out dens in sand for habitation and protection, which can be as large as 120 m2 (1,292 sq ft) and adjoin the dens of other families. Precise population figures are not known but are estimated from the frequency of sightings; these indicate that the animal is currently not threatened by extinction. Knowledge of social interactions is limited to information gathered from captive animals. The species is usually assigned to the genus Vulpes; however, this is debated due to differences between the fennec fox and other fox species. The fennec's fur is prized by the indigenous peoples of North Africa, and in some parts of the world, the animal is considered an exotic pet.

The coat is often a cream color and fluffy, which deflects heat during the day and keeps the fox warm at night.[3] The fennec's characteristic ears are the largest among all foxes relative to body size,[3] and serve to dissipate heat, as they have many blood vessels close to the skin.[8] The ears of a fennec are sensitive enough to hear prey that may be underground;[5] the soles of its feet are protected from the hot desert sand by thick fur.[3]

The species was previously classified in the genus Fennecus, but has since been reclassified to the genus Vulpes which includes a variety of other types of foxes.[2] Scientists have noted that while there are similarities, there are many differences that set the fennec fox apart from other fox species, including both physical and social traits.[9] This has led to two conflicting classifications: Vulpes zerda, implying that the fennec fox is a true fox, and Fennecus zerda, implying that the fennec fox belongs to its own genus.[10] 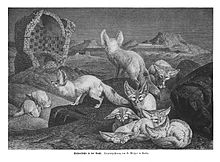 An 1876 sketch of a pack of fennec foxes

Information on fennec fox social behavior is mainly based on captive animals. The basic social unit is thought to be a mated pair and their offspring, and the young of the previous year are believed to remain in the family even after a new litter is born. Playing behavior is common, including among adults of the species.[12] Fennec foxes make a variety of sounds, including barking, a purring sound similar to that of a domestic cat, and a snarl if threatened.[13]

Captive animals engage in highly social behavior, typically resting while in contact with each other. Males tend to show more aggression and urine-marking around the time of the females' estrous cycle. They have been seen to bury feces by pushing soil with their noses or hind feet when in captivity. Much remains unknown of their basic ecology and behavior in the wild, and a 2004 report by the International Union for Conservation of Nature stated that "in-depth study of the species, with particular emphasis on habitat use and population dynamics in the wild, is overdue."[12]

The fennec fox is an omnivore. Food sources include plants, rodents, insects, birds, eggs,[5] and rabbits.[14][15] An individual can jump up to 2 ft (61 cm) high and 4 ft (120 cm) forward, which helps it catch prey and escape predators.[3] When hunting, large eared foxes such as the fennec, or the bat-eared fox, can seem to stare at the ground while they rotate their heads from side to side to pinpoint the location of prey, either underground or hidden above ground.[8] There are reports that fennec foxes climb date palms while foraging for fruit; however, some experts consider these reports unlikely unless low branches are available for support.[16]

The species is able to live without free water, as its kidneys are adapted to restrict water loss. A fennec's burrowing can cause the formation of dew. They are also known to absorb water through food consumption; but will drink water if available.[5]

Close up of the head of a fennec fox

Fennec foxes are social animals that mate for life, with each pair or family controlling their own territory.[17] Sexual maturity is reached at around nine months old. In the wild, mating usually occurs between January and February for litters to be born between March and April. However, in captivity most litters are born later, between March and July, although births can occur year round.[12] The species usually breeds only once each year.[18] The copulation tie has been recorded as lasting up to two hours and 45 minutes. Following mating, the male becomes very aggressive and protective of the female, providing her with food during her pregnancy and lactation periods.[12]

Gestation is usually between 50 to 52 days, although there have been 62 and 63 day gestation periods reported from foxes in captivity. The typical litter is between one and four kits, with weaning taking place at around 61 to 70 days.[12] When born, the kit's ears are folded over and its eyes are closed, with the eyes opening at around ten days and the ears lifting soon afterward.[18] The life span of a fennec fox has been recorded as up to 14 years in captivity.[12]

The species is found in North Africa and Asia. The range is from Morocco through to Egypt, as far south as northern Niger and as far east as the Sinai Peninsula and Kuwait.[19]

A fennec fox's typical den is dug in sand, either in open areas or places sheltered by plants with stable sand dunes considered to be their ideal habitat. In compacted soils, dens can be up to 120 square meters, with up to 15 different entrances. In some cases different families interconnect their dens, or locate them close together. In soft, looser sand, dens tend to be simpler with only one entrance leading to a single chamber.[12]

The fennec fox is classified as "Least Concern" on the IUCN Red List,[1] and as a CITES Appendix II species: species not necessarily threatened with extinction, but whose trade must be controlled to avoid utilization incompatible with their survival.[20][21] It is often hunted by humans, though it does not cause any direct harm to human interests, such as livestock.[5] Like other foxes, it is prized for its fur by the indigenous people of the Sahara and Sinai.[22]

Current statistics on population are not known, but the population is assumed to be adequate based on observations of traders commonly trapping fennec foxes in Northern Africa for exhibition or sale to tourists. In southern Morocco, the fennec fox is commonly seen in sandy areas away from permanent human settlements.[10]

The fennec fox's main predators are the various African varieties of eagle owl.[18] Other possible predators include caracals, jackals, striped hyenas, and the saluki, a greyhound-like domestic dog local to the area. However, fennec foxes are considered very difficult to capture, and reports of predators other than the eagle owl are considered to be anecdotal and questionable.[12][18][23]

Fennec foxes are commonly trapped for sale to the pet trade and for fur by the human population of Northern Africa. In southern Morocco in particular, their meat is not eaten because it is considered to be foul smelling.[12]

A pet fennec scratching an ear with a hind foot.

The fennec fox is bred commercially as an exotic house pet.[6] Breeders tend to remove the young kits from the mother to hand-rear, as owners prefer tamer and more handleable foxes, thereby making them more expensive.[18]

The species is classified a "Small wild/exotic canid" by the United States Department of Agriculture, along with the coyote, dingo, jackal, and arctic fox,[24] and is considered the only species of fox, other than the domesticated silver fox, which can properly be kept as a pet. Although it cannot be considered domesticated, it can be kept in a domestic setting similar to dogs or cats.[25] A breeders' registry has been set up in the USA to avoid any problems associated with inbreeding.[18] The legality of owning a fennec fox varies by jurisdiction, as with many exotic pets.[26][27]

The fennec fox is the national animal of Algeria.[28] It also serves as the nickname for the Algeria national football team: "Les Fennecs".[29]