Jump to content
From Wikipedia
Not to be confused with Sulawesi Palm Civet.

Brown palm civet (Paradoxurus jerdoni) also called the Jerdon's palm civet is a civet endemic to the Western Ghats of India. There are two subspecies, the nominate P. j. jerdoni and P. j. caniscus.[1] The Sulawesi palm civet is sometimes referred to by the same English name due to its brown colour.[3] 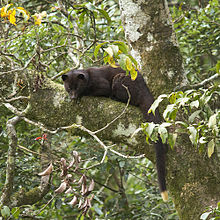 The brown palm civet's distribution extends from the southern tip of Western Ghats in Kalakkad Mundanthurai Tiger Reserve to Castle Rock in Goa to the north.[4] They are nocturnal, and not as rare as previously thought and sight records of the species in Kodaikanal and Ootacamund where they were earlier considered to be locally extinct are an indication of their ability to go unnoticed.[5]

The brown palm civet has a uniformly brown pelage, darker around the head, neck, shoulder, legs, and tail. Sometimes the pelage may be slightly grizzled. Two subspecies have been described on the basis of the colour of the pelage although the colour is extremely variable, ranging from pale buff or light brown to dark brown. The dark tail sometimes has a white or pale-yellow tip. It has no distinct markings on the body or the face as in the common palm civet. A distinctive feature is the reversed direction of hair growth on the nape, similar to that in the golden palm civet (P. zeylonensis) of Sri Lanka. It is about as large as the Common Palm Civet, but with a long and sleek tail. The body weight of the males ranges from 3.6 kg to 4.3 kg, head and body length 430 mm to 620 mm, and tail length from 380 to 530 mm.[5][6][7] The species was described in 1885 on the basis of a skull and pelt obtained in Kodaikanal by Mr F. Levinge and forwarded by Rev. S. B. Fairbank to W T Blanford. Blanford noted the long foramen on the anterior palate. He also found the pelt matching another specimen collected by Francis Day. Blanford named the species in honour of T. C. Jerdon.[8] Subspecies caniscus was described by R I Pocock on the basis of a specimen collected at Virajpet in southern Coorg.[9] 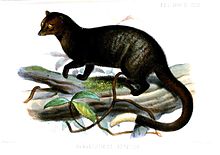 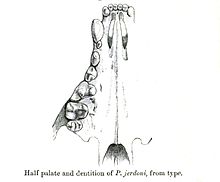 Dentition. The anterior palatine foramina are longer than in other species in the genus.[6]

The brown palm civet is predominantly frugivorous. Fruits form a large proportion (97 per cent) of its diet and more than 53 native and four introduced species of plants have been recorded. The diet patterns vary across years and even within the same year. They adapt to climatic variations in fruit availability by feeding on a diverse range of species of invertebrates and vertebrates. They eat fruits of trees and lianas, rarely those of herbs or shrubs. The diet is mostly composed of small (<1 cm diameter), many seeded, pulpy berries, and drupes with moderate to high water content, along with several large (>2 cm) fruits like Palaquium ellipticum, Elaeocarpus serratus, Holigarna nigra, and Knema attenuata.[10] They have also been recorded feeding on flowers such as those of Cullenia exarillata[11] and Syzygium species.[10]

The brown palm civet is a solitary, nocturnal small carnivore. They rest during the day in day-bed sites, such as tree hollows, canopy vine tangles, Indian giant squirrel nests and forks of branches. The day-bed trees are large and are usually in dense mature forest stands with high canopy connectivity. They sometimes rest in the night in open branches.[12]

The brown palm civet is a key mammalian seed disperser in the Western Ghats rainforest by being predominantly frugivorous and dispersing a diverse array of plant species.[10] Their large range and presence within several protected areas have led them to be classified as being of low conservation concern.[13] The brown palm civet occurs in fragmented landscapes containing remnants of tropical rainforest amid commercially exploited land patches such as tea and coffee plantations. Their ability to persist in such landscapes depends on the occurrence of a diversity of fruit tree species in these areas (e.g., shade trees in coffee plantations).[14] However, these areas often do not have large mammalian dispersers and birds like hornbills and large pigeons due to habitat loss and hunting. Hence, the brown palm civet gains importance in such human-impacted landscapes as an important disperser and maintains biodiversity.