Template:Automatic Taxobox The true seals or earless seals are one of the three main groups of mammals within the seal superfamily, Pinnipedia. All true seals are members of the family Phocidae /ˈfoʊsədiː/. They are sometimes called crawling seals to distinguish them from the fur seals and sea lions of the family Otariidae. Seals live in the oceans of both hemispheres and, with the exception of the more tropical monk seals, are mostly confined to polar, subpolar, and temperate climates. The Baikal seal is the only seal found exclusively in fresh water.

Phocids are more specialized for aquatic life than otariids. They lack external ears and have sleek, streamlined bodies. Retractable nipples, internal testicles, and an internal penile sheath provide further streamlining. A smooth layer of blubber lies underneath the skin. Phocids are able to divert blood flow to this layer to help control their temperatures.

Their fore flippers are used primarily for steering, while their hind flippers are bound to the pelvis in such a way that they cannot bring them under their bodies to walk on them.

They are more streamlined than fur seals and sea lions, so can swim more effectively over long distances. However, because they cannot turn their hind flippers downward, they are very clumsy on land, having to wriggle with their front flippers and abdominal muscles.

Phocids have fewer teeth than land-based members of the Carnivora, although they retain powerful canines. Some species lack molars altogether. The dental formula is: Template:DentalFormula

Phocid respiratory and circulatory systems are adapted to allow diving to considerable depths, and they can spend a long time underwater between breaths. Air is forced from the lungs during a dive and into the upper respiratory passages, where gases cannot easily be absorbed into the bloodstream. This helps protect the seal from the bends. The middle ear is also lined with blood sinuses that inflate during diving, helping to maintain a constant pressure.[1]

Phocids swim by sideways movements of their bodies, using their hind flippers to fullest effect.[1] 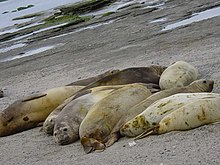 Phocids spend most of their time at sea, although they return to land or pack ice to breed and give birth. Pregnant females spend long periods foraging at sea, building up fat reserves, and then return to the breeding site to use their stored energy to nurse pups. However, the common seal displays a reproductive strategy similar to that used by otariids, in which the mother makes short foraging trips between nursing bouts.

Because a phocid mother's feeding grounds are often hundreds of kilometers from the breeding site, she must fast while lactating. This combination of fasting with lactation requires the mother to provide large amounts of energy to her pup at a time when she is not eating (and often, not drinking). Mothers must supply their own metabolic needs while nursing. This is a miniature version of the humpback whales' strategy, which fast during their months-long migration from arctic feeding areas to tropical breeding/nursing areas and back.

Phocids produce thick, fat-rich milk that allows them to provide their pups with large amounts of energy in a short period. This allows the mother to return to the sea in time to replenish her reserves. Lactation ranges from five to seven weeks in the monk seal to just three to five days in the hooded seal. The mother ends nursing by leaving her pup at the breeding site to search for food (pups continue to nurse if given the opportunity). "Milk stealers" that suckle from unrelated, sleeping females are not uncommon; this often results in the death of the mother's pup, since a female can only feed one pup.

The pup's diet is so high in calories, it builds up a fat store. Before the pup is ready to forage, the mother abandons it, and the pup consumes its own fat for weeks or months while it matures. Seals, like all marine mammals, need time to develop the oxygen stores, swimming muscles, and neural pathways necessary for effective diving and foraging. Seal pups typically eat no food and drink no water during the period, although some polar species eat snow. The postweaning fast ranges from two weeks in the hooded seal to 9–12 weeks in the northern elephant seal. The physiological and behavioral adaptations that allow phocid pups to endure these remarkable fasts, which are among the longest for any mammal, remain an area of active study and research.

In the 1980s, phylogenetic analysis of the phocids has led to a few conclusions about the interrelatedness of the various genera. The four genera Hydrurga, Leptonychotes, Lobodon, and Ommatophoca form a monophyletic group, the tribe Lobodontini. Likewise, the Phocinae subfamily (Erignathus, Cystophora, and Phocini) is also monophyletic. More recently, five species have been split off from Phoca, forming three additional genera. However, the subfamily Monachinae (the lobodonts plus Monachus and Mirounga) is probably paraphyletic.[2]

The earliest fossil phocids date from the mid-Miocene, 15 million years ago in the north Atlantic. Until recently, many researchers believed that phocids evolved separately from otariids and odobenids; and that they evolved from otter-like animals, such as Potamotherium, which inhabited European freshwater lakes. Recent evidence strongly suggests a monophyletic origin for all pinnipeds from a single ancestor, possibly Enaliarctos, most closely related to the bears.

Monk seals and elephant seals are believed to have first entered the Pacific through the open straits between North and South America, which only closed in the Pliocene. The various Antarctic species may have either used the same route, or traveled down the west coast of Africa.[5]