The African civet (Lua error in package.lua at line 80: module 'Module:IPAc-en/data' not found.; Civettictis civetta) is the largest representative of the African Viverridae. It is the sole member of its genus.[3] African civets can be found from coast to coast across sub-Saharan Africa. They are primarily nocturnal and spend the day sleeping in dense vegetation. During the night, when they are the most active, they can be found in a wide variety of habitat consisting of thick forest to open country.[4] The African civet is a solitary mammal that is easily recognizable by its unique coloration; the black and white stripes and blotches covering the coarse pelage of the animal are extremely variable and allow it to be cryptic.[3] The black bands surrounding the African civet’s eyes closely resemble those of the raccoon. Other distinguishing features of the African civet are its disproportionately large hindquarters and its erectile dorsal crest.[4]

The African civet is an omnivorous generalist, taking small vertebrates, invertebrates, eggs, carrion, and vegetable matter. It is capable of taking on poisonous invertebrates (such as the millipedes most other species avoid) and snakes. Prey is primarily detected by smell and sound rather than by sight.[3]

Like all civets it has perineal glands that produce a fluid known as civet, which it spreads on markers in its territory to claim its range. It is used in the perfume industry.

Some civets, such as the African civet and the Congo water civet, are semiaquatic. Although most civets live on the ground, palm civets are found in trees and eat fruit.[5] 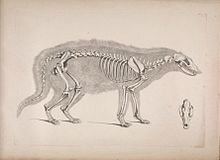 Among the extant viverrid family, only the binturong matches or exceeds the African civet in size. While females are sometimes credited as slightly larger, there are no great discernible differences in measurements between sexes. Weight can range from 7 to 20 kg (15 to 44 lb), with an average mass of about 12.5 kg (28 lb). Head-and-body length is 67 to 84 cm (26 to 33 in), while the tail is 34 to 47 cm (13 to 19 in) and shoulder height averages 40 cm (16 in).[6] Civettictis civetta is a stocky animal with a long body and appears short-legged for its size although its hind limbs are noticeably larger and more powerful.[7] It has a short broad neck, a pointed muzzle, small rounded ears, small eyes and a long bushy tail.[3]

The African civet has five digits per manus in which the first toe is slightly set back from the others.[3] The African civet has long, curved, semi-retractile claws. Its feet are compact and unsuitable for digging or climbing and the soles of the feet are hairless. African Civets have a modified synapsid skull which is heavy-built and is the longest of any viverrid.[3] The zygomatic arch is robust and provides a large area for attachment of the masseter muscle. The skull also has a well-developed sagittal crest which provides a large area for attachment of the temporalis muscle. This musculature and the African civet’s strong mandible give it a powerful bite oriented to its omnivorous diet. African civets have a total of forty teeth and a dental formula of 3/3, 1/1, 4/4, 2/2.[3]

Like many mammals, the African civet has two types of fur - under fur and guard hairs. The pelage of the African civet is coarse and wiry. The coat is unique to each individual, just like a human fingerprint. The dorsal base color of the fur varies from white to creamy yellow to reddish. The stripes, spots, and blotches which cover the animal are deep brown to black in coloration.[3] Horizontal lines are prominent on the hind limbs, spots are normally present on the midsection of the animal and fade anteriorly into vertical stripes above the forelimbs. The tail of the African civet is black with a few white bands and the paws are completely black. The head, neck and ears are clearly marked. A black band stretches across its eyes like that of a raccoon and the coloration of its neck is referred to as a double collar because of the two black neck bands.[3]

Following the spine of the animal extending from the neck to the base of the tail is the erectile dorsal crest. The hairs of the erectile crest are longer than those of the rest of the pelage. If an African civet feels threatened, it raises its dorsal crest to make itself look larger and thus more formidable and dangerous to attack. This behavior is a predatory defense.[4]

The perineal gland is what this species of civet is well known for and Civettictis civetta has historically been the species most often harvested for it. This gland secretes a white or yellow waxy substance called civet, which is used by civets for marking territory and by humans as a perfume base. Perineal and anal glands are found in both male and female African civets, however, the glands are bigger in males, which can produce a stronger secretion.[3] The perineal glands are located between the scrotum and the prepuce in males and between the anus and the vulva in females.

Civettictis is derived from the French civette and the Greek ictis, meaning weasel. Civette came from the Arabic zabād or sinnawr al-zabād, civet cat. The civet has been a valued domestic animal in Africa since ancient times.[8]

The perineal gland secretion, civet, has been the basic ingredient for many perfumes for hundreds of years and is still being used today although on the decline since the creation of synthetic musk.[3] African civets have been kept in captivity and milked for their civet which is diluted into perfumes. They can secrete three to four grams of civet per week and it can be sold for just under five hundred dollars per kilogram.[9] The WSPA says that Chanel, Cartier, and Lancôme have all admitted to using civet in their products and that laboratory tests detected the ingredient in Chanel No. 5.

The average lifespan of an African civet is fifteen to twenty years. Mating occurs in the warm and wet summer months from August to January. This time is favored because of the large populations of insects. Females create a nest which is normally in dense vegetation and commonly in a hole dug by another animal.[9]

Females are polyestrous and can have up to three litters per year. Female African civets normally give birth to one to four young. The young are born in advanced stages compared to most carnivores. They are covered in a dark, short fur and can crawl at birth. The young leave the nest after eighteen days but are still dependent on the mother for milk and protection for another two months.[9]