The hairy-nosed otter (Lutra sumatrana) is one of the rarest otter species. Until 1998, it was thought to have been extinct, but small populations have been discovered since then. 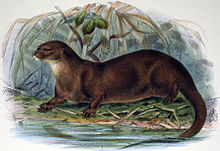 The hairy-nosed otter is the least known of the Asian otters, and is also the most difficult to identify in the field. The hairy-nosed otter gets its name from the hairs on the end of its rhinarium (moist part of its nose); in most other respects it is similar to European otter, Lutra lutra. Hairy-nosed otters are entirely brown, except for lips, chin and upper throat, which are whitish. Their fur is rather rough but short. Their tails are flattened and oval in cross section, and their feet are fully webbed between the digits, with prominent claws. The penis of the adult male is not visible externally. The contact call between otters is a single-syllabic chirp; adult females call to pups with a staccato chatter. Large otters are very similar and can be positively distinguished only by close inspection of the nose and fur, or the skull. In this species, the skull is flatter than that of smooth otter, Lutrogale perspicillataI and has smaller teeth.[4]

The hairy-nosed otter can be found in coastal areas and on larger inland rivers, solitary or in groups of up to four. Its diet includes fish and crustaceans. Pairing of a male and a female may be limited to the breeding period.[4]

At present, it is believed to live mainly in two nature reserves in Vietnam,[5] in the Toa Daeng peat swamp forest in southern Thailand,[6][7] and in Sumatra, the place for which it was named. It was rediscovered in 2005.[8] It was also rediscovered in Tonle Sap Lake, Cambodia.[9] Even from these places, they are known from a tiny number of sightings and some roadkill, and from skins.

In June 2008, the Wildlife Alliance -led Wildlife Rapid Rescue Team received a donated hairy-nosed otter originating near the Tonle Sap in Cambodia. Working with Conservation International, they established a safe home for the rescued otter at the Phnom Tamao Wildlife Rescue Centre, but the otter, which had been frequently sick throughout its life in captivity, died of unknown causes in February 2010. Phnom Tamao Wildlife Rescue Centre rescued another hairy-nosed otter in July 2010, and hope it will become part of a future captive breeding program. This is currently the only known hairy-nosed otter in captivity.

Another record of the species was on September 2008 in U Minh Ha National Park in southern Vietnam, when researchers from the Carnivore and Pangolin Conservation Program said they have found two hairy-nosed otters.[10]

After being assumed to be “nonexistent” in the state of Sabah, Malaysia for the last 100 years, the otter was rediscovered using a series of camera traps in 2010.[11] The same study also confirmed the presence of several other endangered species. Director of Sabah Forestry Department Datuk Sam Mannan said, “These findings show that long-term sustainable forest management is of great importance for the protection of some of this country’s most threatened species and of the unique biodiversity of the forests of Borneo.”

The hairy-nosed otter is the rarest otter in Asia, most likely verging on extinction in the northern parts of its range and of uncertain status elsewhere. Only a few viable populations remain, widely scattered in region. The species is threatened by loss of lowland wetland habitats, hunting for fur and meat, and accidental killing during fishing.[4]Although the population of the hairy nosed otter is unsure it is supposedly around 86.[citation needed]