For other uses, see Felis (disambiguation).

Felis is a genus of cats in the family Felidae, including the familiar domestic cat and its closest wild relatives. The wild species are distributed widely across Europe, southern and central Asia, and Africa; the domestic cat has been introduced worldwide.

Members of the genus Felis are all small felines, with a more or less close resemblance to the domestic cat. The smallest species is the black-footed cat, which may be less than 40 cm (16 in) in length, while the largest is the jungle cat, which can reach 94 cm (37 in). They inhabit a range of different habitats, from swampland to desert, and generally feed on small rodents, supplementing their diets with birds and other small animals, depending on their local environment.

Genetic studies indicate the genus Felis first evolved around eight to 10 million years ago, probably in the Mediterranean region.[1]

The genus Felis is currently considered to consist of five living species, although the domestic cat is sometimes considered a subspecies of F. silvestris.

The classification of the cat family Felidae has seen many permutations over the years, and nearly all other species of the family were at one point placed in the genus Felis. 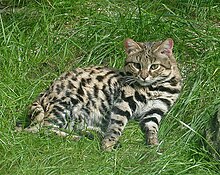 The black-footed cat of southern Africa

Felis once contained most of the small cats, and at times contained a very large number of species. In the 1940s, the British zoologist Reginald Innes Pocock identified 40 taxa previously described as separate species as actually being subspecies of Felis silvestris, thus greatly reducing the size of the genus.[6] Today, few of these subspecies are recognised as being distinct, while the majority of species of small cats have been separated into their different genera, such as Leopardus and Puma.

Pallas's cat has an especially complicated taxonomic history. The bloated genus Felis was later split into many smaller genera, resulting in Pallas's cat being reclassified as the only member of the genus Otocolobus. However, during the late 20th century, it was considered to be closely related to the remaining species of the genus Felis and was classified accordingly. Finally, recent research has shown it to be closely related to both Felis and Prionailurus. As a result, the genus Otocolobus has been resurrected and Pallas's cat has been reclassified (again).