The caracal (Caracal caracal) Lua error in package.lua at line 80: module 'Module:IPAc-en/data' not found. is a medium-sized wild cat that is around 1 metre (3.3 ft) long. The caracal is sometimes called the Desert Lynx or African Lynx, but it is not a member of the Lynx genus. The caracal is native to Africa, Central Asia, Southwest Asia and India. The cat's name comes from the Turkish word "karakulak", which means "black ear".[1] 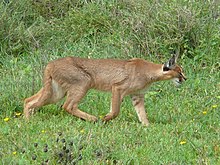 The caracal has large, tufted ears like a lynx. Its fur is reddish-gold. Caracals have white fur on the abdomen, chin and throat. Black lines run from the eye to the nose. Its fur coat is short and very dense. The ears are lightly colored in the front and the back is black. They have very long black tufts that are about 4.4 cm (1.8 in) and look like the ear tufts of a lynx. Males can weigh up to 18 kilograms (40 lb), and females up to 16 kilograms (35 lb). Caracals are about 40 centimetres (16 in) to 50 centimetres (20 in) tall at the shoulder. Caracals have a short tail. The male and female look the same. Its eye pupils shrink to circles, while other cats' pupils shrink to slits. Caracals have yellow brown eyes.[1]

Caracal are nocturnal hunters. They are normally solitary animals, but some will stay in pairs. Caracals can purr, hiss, snarl, bark and growl. The caracal breeds throughout the year. Females will have from one to six kittens per litter. The kittens become independent after about nine or ten months. The young then travel considerable distances to find and claim their own new territory. Females normally have one litter per year. In captivity, a caracal can live up to 16 years; in the wild, they live for 10 to 12 years. Females stay in one place to defend the territory, while males roam over larger areas. Both genders leave scent marks. The caracal's speed and agility makes them very good hunters; they are able to take down prey two to three times their size.[1] Their powerful hind legs allow them to leap more than 3 meters into the air to catch birds on the wing.[2]

The caracal inhabits woodlands, savannas, semi-deserts, and scrub forests. Although it usually hunts on the ground, it can climb trees and swim swiftly to catch fish. They are not found in tropical rain forests.[1]

Like most carnivorous cats, caracals have a very broad diet. It mainly consumes small mammals and birds. It also preys upon the young of larger mammals, such as the impala and antelope. Caracals sometimes eat lizards, snakes and insects.[1]

Hunting caracals is forbidden in sub-Saharan Africa, but only in about half of caracal's range, as it is not protected in Namibia and South Africa. Like many cats, the caracal is not often seen. However, the caracal seems to be doing well even in nations where hunting them is permitted. Humans are the primary threat to caracals,[1] but leopards are known to kill them.[3]

Some zoos raise caracals in captive breeding programs. The ethics and safety of having a caracal as a pet is debated. Although they are easy to tame, caracals are very active and territorial.[4]

Caracals were historically trained to hunt birds in Iran and India. Sometimes, a caracal was put into an stadium along with a flock of pigeons. People would make bets on how many pigeons the caracal would kill during a set time span. A well-trained caracal could take down up to twelve pigeons in one leap with its large paws and strong legs.[5]

Caracals appear to have been religiously significant to the ancient Egyptians. Caracals were found in wall paintings, and sculptures of caracals and other cats guarded tombs. Some caracal bodies were embalmed.[6]

The Caracal Battalion is a combat unit in the Israel Defense Forces.