The Japanese badger (Meles anakuma) is a species of carnivoran of the family Mustelidae, the weasels and their kin. It is endemic to Japan, where it is found on Honshu, Kyushu, Shikoku,[2] and Shodoshima.[1] It shares the genus Meles with the Asian and European badgers. 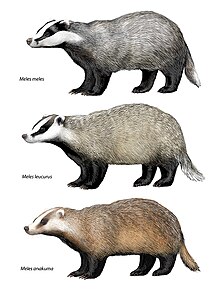 Japanese badgers are smaller (average length 79 cm (31 in) in males, 72 cm (28 in) in females) and less sexually dimorphic (except in the size of the canine teeth) than their European counterparts.[1] Tail length is between 14 and 20 cm (5.5 and 7.9 in). Adults usually weigh from 4 to 8 kg (8.8 to 17.6 lb). The torso is blunt and limbs are short. The front feet are equipped with powerful digging claws. The claws on hind feet are smaller. The upper coat has long gray-brown hair. Ventral hair is short and black. The face has characteristic black-white stripes that are not as distinct as in the European badger. The dark color is concentrated around the eyes. The skull is smaller than in the European badger.[1]

The absence of badgers from Hokkaido, and the presence of related M. leucurus in Korea, suggest that the ancestral badgers reached Japan from the southwest via Korea.[1] Genetic studies indicate that there are substantial differences between Japanese and Asian badgers, which were formerly considered conspecific, and that the Japanese badgers are genetically more homogenous.[1]

Japanese badgers are nocturnal and hibernate during the coldest months of the year.[1] Beginning at 2 years of age, females mate and give birth to litters of two or three cubs in the spring (March-April). They mate again shortly afterwards, but delay implantation until the following February.[1] Japanese badgers are more solitary than European badgers; they do not aggregate into social clans, and mates do not form pair bonds. During mating season, the range of a male badger overlaps with those of 2 to 3 females.[1]

Japanese badgers are found in a variety of woodland and forest habitats.[1]

Japanese badgers have an omnivorous diet that includes worms, beetles, berries and persimmons.[1]

Although they remain common, their range has shrunk recently.[1] They presently range over about 29 per cent of the country, an area that has shrunk 7 per cent over the last 25 years.[1] Increased land development and agriculture, as well as competition from introduced raccoons are threats. Hunting is legal but has declined sharply since the 1970s.[1]