Blanford's fox (Vulpes cana), is a small fox found in certain regions of the Middle East.

It is also known as the Afghan fox, royal fox, dog fox, hoary fox, steppe fox, black fox,[4] king fox[4] (شاه‌روباه Shāhrūbāh in Persian), cliff fox[4] or Baluchistan fox.[4] This can be confusing because other species are known as the corsac fox (Vulpes corsac) and the hoary fox (Lycalopex vetulus).

The Blanford's fox inhabits semi-arid regions, steppes and mountains of Afghanistan, Egypt (Sinaï), Turkestan,[5] northeast Iran, SW Pakistan, the West Bank and Israel.[6] It may also live throughout Arabia (Oman, Yemen and Jordan), as one was trapped in Dhofar, Oman in 1984. Recent camera trapping surveys have confirmed the presence of the species in several places in the mountains of South Sinai, Egypt[7] and the Mountains of Ras Al Khaima, UAE,[8] and in Saudi Arabia.[9]

The Blanford's fox possesses footpads that are hairless and have claws that are cat-like, curved, sharp, and have been described by some authors as semi-retractile.[10][11]

The Blanford's fox has an ability to climb rocks and jump described as "astonishing", jumping to ledges 3 m above them with ease and as part of their regular movements and climbing vertical, crumbling cliffs by a series of jumps up vertical sections.[12] The foxes use their sharp, curved claws and naked footpads for traction on narrow ledges and their long, bushy tails as a counterbalance.[12] 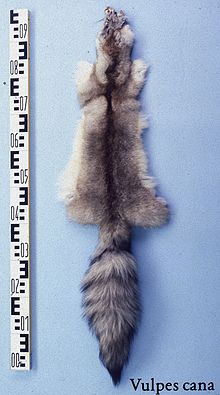 Like all desert foxes, the Blanford's fox has large ears which enables it to dissipate heat.[citation needed] However, unlike other desert foxes, it does not have pads covered with hair, which would otherwise protect its paws from hot sand. Its tail is almost equal in length to its body. Its coat is light tan, with white underparts and a black tip on the tail. Among all extant canids, only the Fennec Fox is smaller than the Blanford's.[13]

Omnivorous, and more frugivorous than other foxes. It prefers seedless grapes, ripe melons and Russian chives when consuming domestic crops. In addition, it eats insects.[citation needed] The Biblical foxes in the vineyard mentioned in the Song of Songs 2:15, described as "little foxex who roun the vineyards" are most probably the frugivorous Blanford's foxes.

While the IUCN has downgraded Blanford's fox to "least concern" as more has been learned about the breadth of its distribution across the Middle East, there is still very little knowledge about this species and its vulnerabilities to the diseases of domesticated dogs that have so badly affected other canids. Currently there is little competition with humans for habitat, and the fox is a protected species in Israel and protected from hunting in Oman and Yemen. Some fur hunting occurs in Afghanistan and occasionally they may take poison intended for hyenas and other species.[2]