Jump to content
From Wikipedia
For other uses, see Arctic fox (disambiguation).

The Arctic fox (Vulpes lagopus), also known as the white fox, polar fox, or snow fox, is a small fox native to the Arctic regions of the Northern Hemisphere and common throughout the Arctic tundra biome.[1][3] It is well adapted to living in cold environments. It has a deep thick fur which is brown in summer and white in winter. Its body length ranges from 46 to 68 cm (18 to 27 in), with a generally rounded body shape to minimize the escape of body heat.

The Arctic fox preys on any small creatures it can find, including lemmings, voles, ringed seal pups, fish, waterfowl, and seabirds. It will also eat carrion, berries, seaweed, insects, and other small invertebrates. Arctic foxes form monogamous pairs during the breeding season and they will stay together to raise their young in complex underground dens. Occasionally, other family members may assist in raising their young.

Arctic fox sleeping with its tail wrapped around itself.

The Arctic fox lives in some of the most frigid extremes on the planet but does not start to shiver until the temperature drops to −70 °C (−94 °F). Among its adaptations for survival in the cold is its dense, multi-layered, pelage which provides excellent insulation,[4][5] a system of countercurrent heat exchange in the circulation within the paws to retain core temperature, and a good supply of body fat. The fox has a low surface area to volume ratio, as evidenced by its generally compact body shape, short muzzle and legs, and short, thick ears. Since less of its surface area is exposed to the arctic cold, less heat escapes from the body. Its paws have fur on the soles for additional insulation and this helps it to walk on ice. The Arctic fox has such keen hearing that it can determine exactly where a small animal is moving under the snow. When it has located its prey, it pounces and punches through the snow to catch its victim. Its fur changes color with the seasons: in most populations it is white in the winter to blend in with snow, while in the summer it is greyish-brown or darker brown. In some populations however it is a steely bluish-gray in the winter and a paler bluish-gray in summer.[4][6]

Arctic foxes do not hibernate and are active all year round. They build up their fat reserves in the autumn, sometimes increasing their body-weight by more than 50%. This provides greater insulation during the winter and a source of energy when food is scarce. They live in large dens in frost-free, slightly raised ground. These are complex systems of tunnels covering as much as 1,000 m2 (1,200 sq yd) and are often in eskers, long ridges of sedimentary material deposited in formerly glaciated regions. They have multiple entrances and may have been in existence for many decades and used by many generations of foxes.[7]

Arctic foxes tend to form monogamous pairs in the breeding season and maintain a territory around the den. Breeding usually takes place in April and May and the gestation period is about 52 days. Litters tend to average 5 to 8 kits but exceptionally contain as many as 25 (the largest litter size in the order Carnivora).[8] Both the mother and father help to raise the young which emerge from the den when 3 to 4 weeks old and are weaned by 9 weeks of age.[7]

Arctic foxes will generally eat any small animal they can find including lemmings, voles, other rodents, hares, birds, eggs and carrion. They scavenge on carcases left by larger predators such as wolves and polar bears and in times of scarcity even eat their feces. In areas where they are present, lemmings are their most common prey[7] and a family of foxes can eat dozens of lemmings each day. In some locations in northern Canada, a high seasonal abundance of migrating birds who breed in the area may provide an important food source. On the coast of Iceland and other islands, their diet consists predominantly of birds. During April and May, the Arctic fox also preys on ringed seal pups when the young animals are confined to a snow den and are relatively helpless. Fish beneath the ice are also part of the diet and they also consume berries and seaweed and may thus be considered omnivores.[9] This fox is a significant bird egg predator, excepting those of the largest tundra bird species.[10] When there is an overabundance of food, the Arctic fox will bury (cache) the surplus as a reserve.

Vulpes lagopus is a 'true fox' belonging to the genus Vulpes of the fox tribe Vulpini. It is classified under the subfamily Caninae of the canid family Canidae. Although it has previously been assigned to its own monotypic genus Alopex, recent genetic evidence now places it in the genus Vulpes along with the majority of other foxes.[3][13]

It was originally described by Carl Linnaeus in the 10th edition of Systema Naturae in 1758 as Canis lagopus. The type specimen was recovered from Lapland, Sweden. The generic name vulpes is Latin for "fox".[14] The specific name lagopus is derived from Ancient Greek λαγως (lagos, "hare") and πους (pous, "foot"), referring to the hair on its feet similar to those found in cold-climate species of hares.[15]

Besides the nominate subspecies, Vulpes lagopus lagopus, there are four other subspecies of this fox: 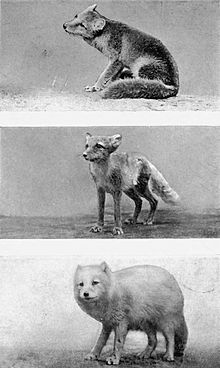 The Arctic fox has a circumpolar distribution and occurs in Arctic tundra habitats in northern Europe, northern Asia and North America. Its range includes Greenland, Iceland, Fennoscandia, Svalbard, Jan Mayen and other islands in the Barents Sea, northern Russia, islands in the Bering Sea, Alaska and Canada as far south as Hudson Bay. In the late nineteenth century it was introduced into the Aleutian Islands south west of Alaska. It mostly inhabits tundra and pack ice but is also present in boreal forests in Canada and the Kenai Peninsula in Alaska. They are found at elevations of up to 3,000 m (9,800 ft) above sea level and has been seen on sea ice close to the North Pole.[16]

The Arctic fox is the only land mammal native to Iceland.[17] It came to the isolated North Atlantic island at the end of the last ice age, walking over the frozen sea. The Arctic Fox Center in Súðavík contains an exhibition on the Arctic fox and conducts studies on the influence of tourism on the population.[18] Its range during the last ice age was much more extensive than it is now, and fossil remains of the Arctic fox have been found over much of northern Europe and Siberia.[1]

The conservation status of the species is in general good and there are estimated to be several thousand individuals in total. The International Union for Conservation of Nature has assessed it as being of "least concern".[1] However the Scandinavian mainland population is acutely endangered, despite being legally protected from hunting and persecution for several decades. The estimate of the adult population in all of Norway, Sweden and Finland is fewer than 200 individuals.[7]

The abundance of the Arctic fox tends to fluctuate in a cycle along with the population of lemmings and voles (a 3-to-4-year cycle).[10] The populations are especially vulnerable during the years when the prey population crashes, and uncontrolled trapping has almost eradicated two subpopulations.[7]

The pelts of Arctic foxes with a slate blue coloration—an expression of a recessive gene—were especially valuable. They were transported to various previously fox-free Aleutian Islands during the 1920s. The program was successful in terms of increasing the population of blue foxes, but their predation of Aleutian Canadian geese conflicted with the goal of preserving that species.[19]

The Arctic fox is losing ground to the larger red fox. This has been attributed to climate change—the camouflage value of its lighter coat decreases with less snow cover.[20] Red foxes dominate where their ranges begin to overlap by killing Arctic foxes and their kits.[21] An alternate explanation of the red fox's gains involves the gray wolf: Historically, it has kept red fox numbers down, but as the wolf has been hunted to near extinction in much of its former range, the red fox population has grown larger, and it has taken over the niche of top predator.[citation needed] In areas of northern Europe, there are programs in place that allow the hunting of red foxes in the Arctic fox's previous range.

As with many other game species, the best sources of historical and large scale population data are hunting bag records and questionnaires. There are several potential sources of error in such data collections.[22] In addition, numbers vary widely between years due to the large population fluctuations. However, the total population of the Arctic fox must be in the order of several hundred thousand animals.[23]

The world population is thus not endangered, but two Arctic fox subpopulations are. One is on Medny Island (Commander Islands, Russia), which was reduced by some 85–90%, to around 90 animals, as a result of mange caused by an ear tick introduced by dogs in the 1970s.[24] The population is currently under treatment with antiparasitic drugs, but the result is still uncertain. 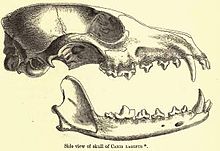 The other threatened population is the one in Fennoscandia (Norway, Sweden, Finland and Kola Peninsula). This population decreased drastically around the start of the 20th century as a result of extreme fur prices, which caused severe hunting also during population lows.[25] The population has remained at a low density for more than 90 years, with additional reductions during the last decade.[26] The total population estimate for 1997 is around 60 adults in Sweden, 11 adults in Finland and 50 in Norway. From Kola, there are indications of a similar situation, suggesting a population of around 20 adults. The Fennoscandian population thus numbers around 140 breeding adults. Even after local lemming peaks, the Arctic fox population tends to collapse back to levels dangerously close to non-viability.[23]

The Arctic fox is classed as a "prohibited new organism" under New Zealand's Hazardous Substances and New Organisms Act 1996 preventing it from being imported into the country.[27]