Jump to content
From Wikipedia
For other uses, see Civet (disambiguation).
This article is about the animal civet. For the perfume, see Civet (perfumery). For the music band, see Civet (band). For the economic term, see CIVETS.

A civet Lua error in package.lua at line 80: module 'Module:IPAc-en/data' not found. is a small, lithe-bodied, mostly nocturnal mammal native to tropical Asia and Africa, especially the tropical forests. The term civet applies to over a dozen different mammal species. Most of the species diversity is found in southeast Asia. The best-known civet species is the African civet, Civettictis civetta, which historically has been the main species from which was obtained a musky scent used in perfumery. The word civet may also refer to the distinctive musky scent produced by the animals. Test123.

The common name is used for a variety of carnivorous mammalian species, mostly of the family Viverridae. The African palm civet (Nandinia binotata) is genetically distinct and belongs in its own monotypic family, Nandiniidae.

Civets are also called "toddycats" in English and "musang" in Malay. The latter may lead to some confusion as the indigenous word "musang" has been appropriated to foxes, which exist in popular culture but are not native and generally never encountered in that geographical region.

Civets have a broadly cat-like general appearance, though the muzzle is extended and often pointed, rather like that of an otter or a mongoose. They range in length from about 17 to 28 in (43 to 71 cm) (excluding their long tails) and in weight from about 3 to 10 lb (1.4 to 4.5 kg).

The civet produces a musk (also called civet) highly valued as a fragrance and stabilizing agent for perfume. Both male and female civets produce the strong-smelling secretion, which is produced by the civet's perineal glands. It is harvested by either killing the animal and removing the glands, or by scraping the secretions from the glands of a live animal. The latter is the preferred method today.

Animal rights groups, such as the World Society for the Protection of Animals, express concern that harvesting musk is cruel to animals. Between these ethical concerns and the availability of synthetic substitutes, the practice of raising civets for musk is dying out. Chanel, maker of the popular perfume Chanel No. 5, claims that natural civet has been replaced with a synthetic substitute since 1998.[2] 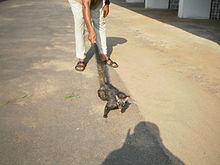 Viverrids are native to Africa (except the area immediately south of the Mediterranean), Madagascar, the Iberian Peninsula, southern China, South and Southeast Asia. Favoured habitats include woodland, savanna, and mountain biomes and, above all, tropical rainforest. In consequence, many are faced with severe loss of habitat; several species are considered vulnerable and the otter civet is classified as endangered. Some species of civet are very rare and elusive and hardly anything is known about them, e.g., the Hose's civet, endemic to the montane forests of northern Borneo, is one of the world's least known carnivores.[3]

In Sri Lanka, the Asian palm civet species is known as "uguduwa" by the Sinhala speaking community. The terms uguduwa and kalawedda are used interchangeably by the Sri Lankan community to refer to the same animal. However, the term kalawedda is mostly used to refer to another species in the civet family, the small Indian civet. Sri Lanka also has an endemic civet species called golden palm civet. Recently this species was split into 3 separate endemic species as Paradoxurus montanus, P. aureus, and P. stenocephalus. In Bangladesh and in Bangla speaking areas of India this animal is known as "khatash" and is now extremely rare in all parts of Bangladesh.

Kopi Luwak, also known as caphe cut chon (fox-dung coffee) in Vietnam and kape alamid in the Philippines, is coffee that is prepared using coffee cherries that have been eaten and partially digested by the Asian palm civet, then harvested from its fecal matter.[4][5] The civets digest the flesh of the coffee cherries but pass the beans inside, leaving their stomach enzymes to go to work on the beans, which adds to the coffee's prized aroma and flavor.[4] 1 pound (0.45 kg) can cost up to $600 in some parts of the world and about $100 a cup in others.[6] A 2012 investigation by The Guardian newspaper found Indonesian civets held separately in cramped cages. The animals were force-fed a debilitating diet of coffee cherries in conditions described by the Traffic charity as "awful" and "horrific".[7] There is a campaign under way to encourage "ethical civet coffee".[8]

Some of the indigenous people in Peninsular Malaysia, the Orang Asli, may occasionally keep pet civets.[citation needed] Other people wishing for an exotic pet without the responsibility of a large animal also own civets as pets, although this practice is mostly illegal

Palm civets often venture into urban and suburban environments, with people often complaining about civet feces or noise from the animals climbing on roofs. Some studies have been undertaken to examine and mitigate human-animal conflict in these cases.[9]