The marbled cat (Pardofelis marmorata) is a small wild cat of South and Southeast Asia. Since 2002, it has been listed as Vulnerable by IUCN, as it occurs at low densities, and its total effective population size is suspected to be fewer than 10,000 mature individuals, with no single population numbering more than 1,000.[2]

The marbled cat was once considered to belong to the pantherine lineage of "big cats".[3] Genetic analysis has shown it to be closely related to the Asian golden cat and the bay cat, all of which diverged from the other felids about 9.4 million years ago.[4] 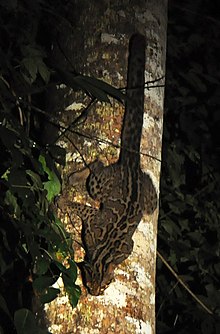 The marbled cat is similar in size to a domestic cat, with a more thickly furred tail (which may be longer than the body), showing adaptation to its arboreal lifestyle, where the tail is used as a counterbalance. Marbled cats range from 45 to 62 cm (18 to 24 in) in head-body length, with a 35- to 55-cm tail. Recorded weights vary between 2 and 5 kg (4.4 and 11.0 lb). The coat is thick and soft, and varies in background color from dark grey-brown through yellowish grey to red-brown. Spots on the forehead and crown merge into narrow longitudinal stripes on the neck, and irregular stripes on the back. The back and flanks are marked with dark, irregular dark-edged blotches. The legs and underparts are patterned with black dots, and the tail is marked with black spots proximally and rings distally. In addition to its long tail, the marbled cat can also be distinguished by its large feet. It also possesses unusually large canine teeth, resembling those of the big cats, although these appear to be the result of parallel evolution.[5]

When standing or resting, marbled cats assume a characteristic position with their backs arched.

Marbled cats are found in tropical Indomalaya westward along the Himalayan foothills westward into Nepal and eastward into southwest China, and on the islands of Sumatra and Borneo. They are primarily associated with moist and mixed deciduous-evergreen tropical forests.[2]

In May 2000, a female marbled cat was trapped along an animal trail in a hill evergreen bamboo mixed forest in Thailand's Phu Khieu Wildlife Sanctuary. This first-ever radio-tracked marbled cat had an overall home range of 5.8 km2 (2.2 sq mi) at an elevation of 1,000 to 1,200 m (3,300 to 3,900 ft) and was active primarily during nocturnal and crepuscular time periods.[8]

Forest canopies probably provide the marbled cat with much of its prey: birds, squirrels and other rodents, and reptiles.[5] In the Bukit Barisan Selatan National Park, a marbled cat was observed in a dense forest patch in an area also used by siamang.[9]

A few marbled cats have been bred in captivity, with gestation estimated to be 66 to 82 days. In the few recorded instances, two kittens were born in each litter, and weighed from 61 to 85 g (2.2 to 3.0 oz). The eyes open at around 12 days, and the kittens begin to take solid food at two months, around the time that they begin actively climbing. Marbled cats reach sexual maturity at 21 or 22 months of age, and have lived for up to 12 years in captivity.[5]

Indiscriminate snaring is prevalent throughout much of its range, and likely poses a major threat. It is valued for its skin, meat, and bones, but infrequently observed in the illegal Asian wildlife trade.[2] During a survey in the Lower Subansiri District of Arunachal Pradesh, a marbled cat was encountered that had been killed by a local hunter for a festival celebrated by the indigenous Apatani community in March and April every year. The dead cat was used in a ceremony, and its blood was sacrificed to the deity for goodwill of their family and for ensuring a good harvest, protection from wildlife, disease and pest.[10] Deforestation is a further threat to the marbled cat.[2]

Pardofelis marmorata is included in CITES Appendix I and protected over parts of its range. Hunting is prohibited in Bangladesh, Cambodia, Yunnan, India, Indonesia, Malaysia, Myanmar, Nepal, and Thailand. Hunting is regulated in Lao PDR and Singapore. In Bhutan and Brunei, the marbled cat is not legally protected outside protected areas. No information about protection status is available from Cambodia and Vietnam.[11]

The only captive marbled cats registered by ISIS are a pair kept at a breeding center in the United Arab Emirates.[12]