The Andean mountain cat (Leopardus jacobita) is a small wild cat.[2] It is one of only two felids for which no subspecies have been classically described (the Bay Cat is the other).[3] Fewer than 2500 individuals are thought to exist.[4] This cat is one of about two dozen small wild cat species found around the world. In comparison to their larger cousins which may have millions of dollars dedicated to conservation efforts, conservation efforts exist on budgets in the thousands for small wild felids like the Andean mountain cat.[5]

Its habitat and appearance make it the small cat analog of the snow leopard. It lives around 3,500–4,800 m (11,500–15,700 ft)—well above the tree line—and only where there is water to support it. While it is about the size of a domestic cat, it appears larger because of its long tail and thick fur. Like snow leopards, the coat of an Andean mountain cat is silvery-grey in color, with a white underside and numerous dark spots and stripes. There are black rings around the tail and limbs.[6]

The tail is long, thick and blunt without tapering. It is approximately Template:2/3 of a cat's body length, and has 6–9, wide dark rings. The front paws have dark narrow stripes that do not form complete rings. The nose is black or very dark in coloration. Distinct dark lines run along the sides of the eyes and the tips of the ears are rounded.[7]

There is a difference between the coloration in juvenile and mature Andean cats. The markings on the coat are darker on juveniles, especially those on the sides of the body. The markings are smaller and more numerous. This can cause confusion and mistaken identification with the pampas cat.[7]

It is one of the least-known and rarest of all felines; almost all that is known about it comes from a few observations in the wild and from skins. There are none in captivity. It is believed to live only in the Andes mountains and lower slope in Peru, Bolivia, Chile and Argentina.[8] An example ecoregion of occurrence is the Chilean matorral in Chile.[9]

There has been a substantial increase in research effort on the Andean mountain cat since Nowell and Jackson wrote that "it is not clear whether [its] apparent rarity is a natural phenomenon, is attributable to human actions, or is simply a misperception resulting from lack of observations".[3] Surveys since then have confirmed that the Andean cat is a rare species, occurring at lower densities in the same high-altitude environment as its close cousin, the Pampas Cat (Leopardus colocolo).[10] Across its range, it has a very low level of genetic diversity.[2][11]

The Andean mountain cat's preferred high-elevation montane habitat is fragmented by deep valleys, and its distribution is likely to be further localized by the patchy nature of colonies of its preferred prey, mountain viscachas (Lagidium spp). The total effective population size could be below 2,500 mature individuals with a declining trend due to loss of prey base and habitat, persecution and hunting for traditional ceremonial purposes, and no subpopulation having an effective population size larger than 250 mature individuals.[12]

While the Andean mountain cat's main prey is likely the mountain viscacha, it is also probable that mountain chinchillas were previously important prey of the Andean mountain cat before their populations were drastically reduced due to hunting for the fur trade.[13] Since it lives only in the high mountains, human-inhabited valleys act as barriers, fragmenting the population, meaning that even low levels of poaching could be devastating. They are often killed in Chile and Bolivia because of local superstition.

Six different species of carnivores live in the Andes Mountain range. Three of these species are cats, the Andean cat, the pampas cat, and the puma. The puma is a large predator, while the Andean and Pampas Cat are medium-sized predators. These two medium-sized predators are very much alike. They both hunt within the same territory. They hunt the same prey, the mountain viscacia (Lagidium viscacia). The viscacia makes up 93.9% of the biomass consumed in the Andean cat's diet while the Pampas Cat depends on it for 74.8% of its biomass consumption.[14] Both of these cats depend on a specific prey to make up a large portion of their dietary needs. In some areas, the mountain viscacha will make up 53% of the Andean cat's prey items. This is because the other prey items are so significantly smaller that even though the Andean cat will successfully hunt, kill, and eat a mountain viscacha half the time, the mountain viscacha is so much larger than the other food items, it makes up more substance.[15] They also hunt frequently during the same periods. During one study, both the Andean cat and the Pampas Cat were seen most frequently during moonless nights; the second most sightings of these cats were during full moons.[16] These two cats both hunt the same prey, making it more difficult for them to find food, essentially creating a race to find the prey before the other does.

Prey is not the only thing these two cats have in common. They look similar. This makes it difficult to identify which cat is observed and makes correct estimations of populations problematic. This can be especially difficult when attempting to gain correct information from the observations of individuals that have seen one of these cats but are not aware to look for specific features to distinguish between the two.[17]

By using the residents' observations of Andean cats in coupled pairs with their litters, it is theorized that the mating season for the Andean cat is within the months of July and August. Because kittens have been seen in the months of April and October, this could mean that the mating season extends into November or even December. A litter will usually consist of one or two offspring born in the spring and summer months. This is common with many other species that also have their young when food resources are increasing.[20]

The Andean cat's habitat spans four different South American countries. Each country has made individual laws to protect this wild cat. Each country also has its own protected game areas where hunting is prohibited. The table below outlines the number of the protected areas that fall within the Andean cat's habitat. Biologists are attempting to determine if any of these protected areas house significant populations of Andean cats.

In 2002 the status of the Andean cat was moved from Vulnerable to Endangered on the IUCN Red List. Due to the Andean cat's habitat being spread across four countries, biologists have attempted to collaborate in efforts to protect the species. One of the groups formed was the Andean Cat Conservation Committee, now known as the Andean Cat Alliance. The table below was taken directly from the most current strategy plan for 2011-2016. 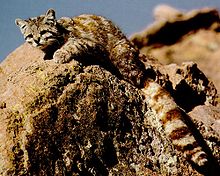 Prior to 1998, the only evidence of this cat's existence was two photographs. It was then that Jim Sanderson took up his quest to find the Andean mountain cat.[23][24] Sanderson sighted and photographed one in Chile in 1998 near Chile's northern border with Peru. In 2004, he joined a Bolivian research team and helped radio-collar an Andean cat in Bolivia. In April 2005, this cat was found dead, perhaps after being caught in a poacher's trap.[25]

Sanderson is still heavily involved with the Andean cat. With coworkers Constanza Napolitano, Lilian Villalba, and Eliseo Delgado and others in the Andean Cat Alliance, the Small Cat Conservation Alliance has forged conservation agreements with Fundación Biodiversitas, a Chilean non-profit organization, and CONAF, the government agency responsible for managing national parks and production forests. CONAF has agreed to allow the SCCA to renovate a building for the Andean Cat Conservation and Monitoring Center on their already-functioning compound at San Pedro de Atacama in Chile.

Villalba of the Andean Cat Alliance conducted a major research program, including radio-telemetry studies, from 2001 to 2006 in the Khastor region of southern Bolivia.[26]

Conservation efforts are also being made by the Feline Conservation Federation to preserve this species. Template:Page numbers needed