The Japanese marten (Martes melampus) is a mammal in the marten genus most closely related to the sable. It is half a meter (1½ feet) in length on average, not counting a 20-centimeter-long tail (7.9 in), and between 1,000 and 1,500 grams (2.2 and 3.3 lb) in weight. Males are generally larger than females. The pelage varies in color from dark brown to dull yellow with a cream-colored throat.

Both males and females are territorial, the size of each individual's territory depending on food availability. The Japanese marten is omnivorous, preferring meat from fish, frogs, and small birds and mammals, but consuming insects, fruit, and seeds when necessary. It sleeps in a den in a hollow tree or a ground burrow.

There are three subspecies of Japanese marten: 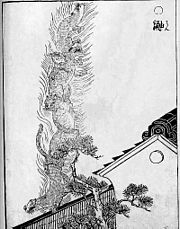 In the Iga region, Mie Prefecture, there is the saying, "the fox has seven disguises, the tanuki has eight, and the marten has nine," and there is a legend about how the marten has greater ability in shapeshifting than the fox (kitsune) or tanuki. In the Akita Prefecture and the Ishikawa Prefecture, it is said that if a marten crosses in front of someone, it is an omen for bad luck (the weasel has the same kind of legend), and in the Hiroshima Prefecture, it is said that if one kills a marten, one would encounter a fire. In the Fukushima Prefecture, they are also called heko, fuchikari, komono, and haya, and they are said to be those who have died in avalanches in disguise.[2]

In the collection of yōkai depictions, the Gazu Hyakki Yagyō by Sekien Toriyama, they were depicted under the title "鼬," but this was read not as "itachi" but rather "ten,"[3] and "ten" are weasels that have reached several years of age and became yōkai that have acquired supernatural powers.[4] In the depiction, several martens have gathered together above a ladder and created a column of fire, and one thing that was feared about them was that if martens that have gathered together in this form appear next to a house, the house would catch on fire.[5]。