The hog-nosed skunks belong to the genus Conepatus and are members of the family Mephitidae (skunks). They are native to the Americas. They have white backs and tails and black underparts.[1] 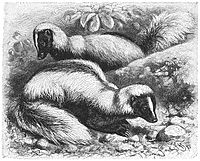 The individual hog-nosed skunk species vary in size, but among them is included the largest of all skunks. All are characterized by comparatively short hair, especially on the tail, and this appendage lacks the plumelike appearance observed in other skunks. The nose is prolonged into a distinct "snout", naked on the top and sides and evidently used for rooting in the earth after the manner of a pig. In addition, the front feet are armed with long, heavy claws. The claws are well developed for digging up insect prey.[4] and the front legs and shoulders are provided with a strong muscular development for digging, as in a badger. This likeness has led to the use in some places of the appropriate name "badger skunk" for these animals. The extent of the stripe on the hind of the skunk, and the color of the tail underside suggests a distinction between Eastern and Western species. The Eastern species is a narrow stripe, with black under the base of the tail. The Western distinction is a wide stripe, with a predominantly white tail. The hair on these skunks is coarse and harsh, lacking the qualities which render the coats of their northern relatives so valuable. They are nocturnal.[4]

Where their range coincides with that of the common skunks, the local distribution of the two is practically the same. They live along the bottom-lands of watercourses, where vegetation is abundant and the supply of food most plentiful, or in canyons and on rocky mountain slopes.

For their protection hog-nosed skunks create their own burrows, generally within a bank, or beneath a rock, or the roots of a tree, but do not hesitate to take possession of the deserted burrows of other animals, or of natural cavities among the rocks. Owing to their strictly nocturnal habits, they are generally much less frequently seen than the common skunks, even in localities where they are numerous. Sightings are recorded from brush habitat and semiopen grasslands. Habitats may also include rocky terrain and stream beds in desert-scrub and mesquite grassland.

Infrequent sightings of the American Hog-nosed Skunks raise concerns over the conservation status.[4]

Although both the spotted skunk and common skunks live mainly on insects, the hog-nosed skunks are even more insectivorous in their feeding habits. The bare snout appears to be used constantly for the purpose of rooting out beetles, grubs, and larvae of various kinds from the ground. Template:Wikispecies

This article incorporates text from the publication Wild Animals of North America, copyright 1918 by the National Geographic Society. This book is in the public domain.