Geoffroy's cat (Leopardus geoffroyi) is a wild cat native to the southern and central regions of South America. It is about the size of a domestic cat. While the species is relatively common in many areas, it is considered to be Near Threatened by IUCN because of concern over land-use changes in the regions where it lives.

Geoffroy's cat at the Cincinnati Zoo

Geoffroy's cat is about the size of a domestic cat, averaging 60 centimetres (24 in), with a relatively short, 31 centimetres (12 in), tail. This felid weighs only about 2 to 5 kilograms (4.4 to 11.0 lb), though individuals up to 7.8 kilograms (17 lb) have been reported. In general, those found in the southern part of their range are larger than those from the north, and males are larger than females.[3]

Their fur has numerous black spots, but the background colour varies from region to region: in the north, a brownish-yellow coat is most common; farther south, the coat is grayish. As with most wild cats, the fur of the underbelly is paler, being cream-colored or even white. There are dark bands on the tail and limbs, and similar markings on the cheeks and across the top of the head and neck. The backs of the ears are black, with white spots (ocelli). Melanism is common both in the wild and in captivity.[3]

Unusual among cats, Geoffroy's cats have been observed to stand up on their hind legs to scan the surrounding landscape, using their tail as a support. A similar posture is seen in weasels, meerkats and prairie dogs, but not generally in felines.[3]

Geoffroy's cats inhabit the Andes, Pampas (scrubby forest parts), and Gran Chaco landscape. They are found from southern Bolivia to the Straits of Magellan, at elevations ranging from sea level up to 3,300 metres (10,800 ft). They prefer open woodland or scrubland habitats with plenty of cover, but are also found in grasslands and marshy areas. Although they are able to climb trees, they rarely do so, except to leave faeces to scent mark their territory.[3]

Although it appears to be plentiful in central regions, including Bolivia, where it is the second most common cat after the ocelot, it is considered to be endangered in regions such as southern Chile.[2] The IUCN currently lists the species as "Near Threatened" because of the concern over habitat conversion in many countries in the cat's range.

Geoffroy's cat is nocturnal, and preys primarily on rodents, hares, small lizards, insects, and occasionally frogs and fish;[3] it is at the top of the food chain in its range. Like other small cats, it is a solitary hunter, regularly contacting others of its species only during the mating season. Females maintain territories ranging from 2 to 6 square kilometres (0.77 to 2.32 sq mi), while males have larger ranges, reaching up to 12 square kilometres (4.6 sq mi).[3]

The breeding season for Geoffroy's cats lasts from October to March. During this time, the female comes into estrus for periods of up to twelve days, roughly a month apart. Mating during this time is brief and frequent, often taking place on a high ledge or similar site.[3]

Pregnant females appear to take extra care in choosing where they give birth to their kittens.[citation needed] Litters may consist of one to four kittens, although one or two is more common. Gestation lasts for 72–78 days,[4] with most births occurring between December and May.[5]

The kittens are born blind and helpless, weighing about 65 to 95 grams (2.3 to 3.4 oz), and develop rather more slowly than in the domestic cat. The eyes open after from eight to nineteen days, and they begin to eat solid food at six or seven weeks.[3] Kittens become independent of their mother at around eight months, but are generally not sexually mature until 18 months for females and 24 months for males.

The oldest recorded age for a Geoffroy's cat in captivity is at least 20 years. The melanistic Geoffroy's cat "Nico" has been resident at Big Cat Rescue in Florida since mid July 1994, and is believed to have been born at the start of May 1993, making her currently 21 years and 4 months of age.[6]

Recently, Geoffroy's cat has been successfully bred with the domestic cat, resulting in the felid hybrid safari cat.[7] 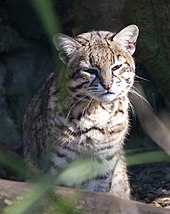 Geoffroy's cat is named after the 19th century French zoologist Étienne Geoffroy Saint-Hilaire (1772–1844). Following his travels to South America in the early 19th century, Saint-Hilaire studied the cat while a professor of zoology in Paris, and identified five subspecies, based on geographic dispersement:[8]

Genetic studies have shown that Geoffroy's cat is most closely related to the kodkod.[9] At times it has been placed in the separate genus Oncifelis, together with the kodkod and colocolo, but it is now more commonly placed in Leopardus, a larger genus of small South American cats, which also includes the ocelot.

From the 1960s to the 1980s, Geoffroy's cats were hunted extensively for their pelts for the international fur trade, but little trade took place after 1988 and the species was upgraded to CITES Appendix I status in 1992 .[5] [10] Legislation introduced in the late 1980s made hunting and domestic trade of their pelts illegal in Argentina, Bolivia, Brazil, Chile, Paraguay, and Uruguay. International trade in Cites Appendix I listed species is now prohibited, except for non-commercial purposes. [11]