The bearded seal (Erignathus barbatus), also called the square flipper seal, is a medium-sized pinniped that is found in and near to the Arctic Ocean. It gets its generic name from two Greek words (eri and gnathos) that refer to its heavy jaw. The other part of its Linnaean name means bearded and refers to its most characteristic feature, the conspicuous and very abundant whiskers. When dry, these whiskers curl very elegantly, giving the bearded seal a "raffish" look.[citation needed]

Fossils first described in 2002 indicated that, during the Pleistocene epoch, bearded seals ranged as far south as South Carolina.[3]

Distinguishing features of this earless seal include square fore flippers and thick bristles on its muzzle. Adults are greyish-brown in colour, darker on the back; rarely with a few faint spots on the back or dark spots on the sides. Occasionally the face and neck are reddish-brown. Bearded seal pups are born with a greyish-brown natal fur with scattered patches of white on the back and head. The bearded seal is unique in the subfamily Phocinae in having two pairs of teats, a feature it shares with monk seals.

Bearded seals, along with ringed seals, are a major food source for polar bears.[5] They are also an important food source for the Inuit of the Arctic coast. The Inuit language name for the seal is ugjuk[6][7] (plural: ugjuit) or oogrook or oogruk. The Inuit preferred the ringed seal for food and light; the meat would be eaten and the blubber burnt in the kudlik (stone lamp). The skin of the bearded seal is tougher than regular seal and was used to make shoes, whips, dog sled harnesses, to cover a wooden frame boat, the Umiak and in constructing summer tents known as tupiq.[8]

The body fat content of a bearded seal is 30–40%.[citation needed]

Primarily benthic, bearded seals feed on a variety of small prey found along the ocean floor, including clams, squid, and fish. Their whiskers serve as feelers[9] in the soft bottom sediments. Adults tend not to dive very deep, favoring shallow coastal areas no more than 300 m (980 ft) deep. Pups up to one year old, however, will venture much deeper, diving as deep as 450 m (1,480 ft).

Bearded seals give birth in the spring. In the Canadian Arctic, seal pupping occurs in May.[8] Further south, in Alaska, most pups are born in late April.[clarification needed] Pups are born on small drifting ice floes in shallow waters, usually weighing around 30–40 kg (66–88 lb). They enter the water only hours after they are born, and quickly become proficient divers. Mothers care for the pups for 18–24 days, during which time the pups grow at an average rate of 3.3 kg (7.3 lb) per day. During this time, pups consume an average of 8 l (1.8 imp gal; 2.1 US gal) of milk a day. By the time they are weaned, the pups have grown to about 100 kg (220 lb).

Just before the pups are weaned, a new mating cycle takes place. Females ovulate at the end of their lactation period, but remain close to their pups, ready to defend them if necessary. During the mating season, male seals will "sing," emitting a long-drawn-out warbling note that ends in a sort of moan or sigh. This sound may attract females, or may be used by the males to proclaim their territory or their readiness for breeding. Males occupy the same areas from one year to the next.[10]

Like many Arctic mammals, bearded seals employs a reproductive strategy known as delayed implantation. This means that the blastocyst is not implanted for two months after fertilization, most often becoming implanted in July. Thus, the seal's total gestation period is around eleven months, though its active gestation period is nine months.[11]

Natural predators of the bearded seal include polar bears, who rely on these seals as a major food source.[12] Killer whales also prey on these seals, sometimes overturning ice floes to reach them. Walruses also eat these seals, mainly pups, but such predation is rare.[13] 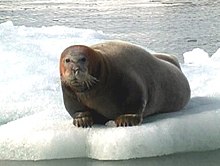 On March 28, 2008, the U.S. National Marine Fisheries Service initiated a status review[14] under the Endangered Species Act (ESA) to determine if listing this species under the ESA is warranted.

There are two recognized subspecies of this seal:[1]

While the validity of these subspecies has been questioned, and is not yet supported by any molecular data,[3] analysis of the animals' calls does indicate a differentiation between different populations.[15] 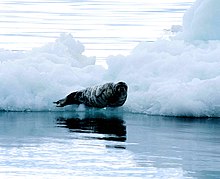