The harp seal or saddleback seal is a species of earless seal native to the northernmost Atlantic Ocean and parts of the Arctic Ocean. It now belongs to the monotypic genus Pagophilus. Its scientific name, Pagophilus groenlandicus, means "ice-lover from Greenland". [2] 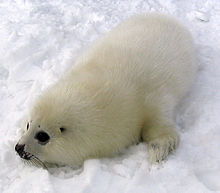 Harp seals combine anatomical and behavioral approaches to managing their body temperatures, instead of elevating their metabolic rate and energy requirements.[3] A thick coat of blubber insulates its body and provides energy when food is scarce or during fasting. Blubber also streamlines its body for more efficient swimming. Brown fat warms blood as it returns from the body surface as well as providing energy, most importantly for just-weaned pups.[3]

Flippers act as heat exchangers, warming or cooling the seal as needed. On ice, the seal can press its fore-flippers to its body and its hind-flippers together to reduce heat loss.[3]

Vision is its critical sense. Its eyes are proportionally large and contain a large spherical lens, improving its focusing ability. Its pupil is mobile to help it adapt to the intense glare of the Arctic ice. Its retina is rod-dominated and backed by a cat-like and reflective tapetum lucidum, enhancing its low light sensitivity. Its rods best sense blue-green, while its cones help with bright light and may provide some color discrimination. Its cornea is constantly tear-covered, to protect it from salt. Lacking tear ducts, it "cries" to remove its tears.[3] On ice, the mother identifies her offspring by smell. This sense may also warn of an approaching predator. Underwater, this seal closes its nostrils and smells nothing.[3] Its whiskers, called vibrissae, lie in horizontal rows on either side of its snout. They may provide a touch sense, and underwater, also respond to low-frequency vibrations, such as movement.

Harp seals prefer to swim in the ocean, spending relatively little time on land.[4] These are extremely social animals and they can be very noisy, as well. They will form large colonies where they spend a great deal of time. Within that loose structure, smaller groups with their own hierarchy are believed to form. Sometimes, these large groups will have to go their separate ways there. Many harp seals are able to live up to 30 years in the wild. After 12 days the mothers abandon their babies.

On the ice, pups call their mothers by "bawling" and "mumble" while playing with others. Adults "growl" and "warble" to warn off others. Underwater, adults express themselves with more than 19 call types during courting and mating.[3] 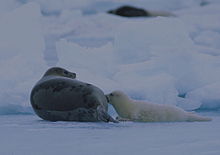 Females mature sexually at age five to six. Annually thereafter, they bear one pup, usually in late February. The fertilized egg grows into a spherical embryo that implants in the uterus only after three or so months, to allow birth to take place while sufficient pack ice is available.[3]

Newborn pups weigh around 11 kilograms (24 lb) and are 80–85 centimetres (31–33 in) long. After birth, the mother only feeds that pup. During the 12 day nursing period, the mother does not eat, losing up to 3 kilograms (7 lb) per day. Harp seal milk contains up to 48% fat, so pups gain over 2.2 kilograms (4.9 lb) per day. During this time, the juvenile's "greycoat" grows in beneath the white neonatal coat, and it weighs 80 pounds (36 kg). Weaning is abrupt; the mother turns from nursing to promiscuous mating, leaving the pup behind on the ice. While courtship starts on the ice, mating usually takes place in the water.[3]

The stranded pup cries at first, and then becomes sedentary to conserve body fat. Within a few days, it sheds its white coat, reaching the "beater" stage.[3]

Pups are unable to swim or find food until seven to eight weeks old or until the ice melts, leaving them vulnerable to polar bears and other predators. This fast costs them up to 50% of their weight. As many as 30% of pups die during their first year, due in part to their early immobility because they learn to swim only slowly.

At about 13–14 months old, the pup molts again, becoming a "bedlamer". Juveniles molt several times, producing a "spotted harp", before the adult's harp-marked pelt fully emerges after several years (or not all in females).[3]

Seals congregate annually on the ice to molt before migrating to summer feeding grounds. Their lifespan extends for about 20 years.Cite error: Invalid <ref> tag; invalid names, e.g. too many; see the help page (). [5]

There are two recognised subspecies:[6]

Harp seals are strongly migratory. The northwest population regularly moves up to 4,000 kilometers (2,500 mi) northeast outside of the breeding season;[7] one individual was located off the north Norwegian coast, 4,640 kilometers (2,880 mi) east northeast of its tagging location.[8] Their navigational accuracy is high, with good eyesight an important factor.[7][9] They are occasionally found as vagrants, south of their normal range. In Great Britain, a total of 31 vagrants were recorded between 1800 and 1988,[10]

More recently, they reached Lindisfarne in Northumberland in September 1995,[11] and the Shetland Islands in 1987. The latter was linked to a mass movement of harp seals into Norwegian waters; by mid-February 1987, 24,000 were reported drowned in fishing nets and perhaps 300,000 (about 10% of the world population) had invaded fjords as far south as Oslo. The animals were emaciated, likely due to humans competing for their prey.[12]

All 3 populations are hunted commercially, mainly by Canada, Norway, Russia and Greenland.[3]

In Canada, commercial hunting season is from November 15 to May 15. Most sealing occurs in late March in the Gulf of St. Lawrence, and during the first or second week of April off Newfoundland, in an area known as "the Front". This peak spring period is generally what is referred to as the "Canadian seal hunt". Hunting Canadian whitecoats has been banned since 1987. In 2006, the St. Lawrence hunt officially started on March 25 due to thin ice caused by the year's milder temperatures. Inuit people living in the region hunt mainly for food and, to a lesser extent, commerce.[3]

The Canadian seal hunt is monitored by the Canadian government. Although approximately 70% of the hunt occurs on "the Front", most private monitors focus on the St. Lawrence hunt, due to its more convenient location.