The Bengal fox (Vulpes bengalensis), also known as the Indian fox, is a fox endemic to the Indian subcontinent and is found from the Himalayan foothills and Terai of Nepal through southern India[2] and from southern and eastern Pakistan to eastern India and southeastern Bangladesh.[3][4][5]

Vulpes bengalensis is a relatively small fox with an elongated muzzle, long, pointed ears, and a bushy tail about 50 to 60% of the length of the head and body. Its dorsal pelage is very variable, but mostly grayish and paler ventrally; its legs tend to be brownish or rufous. It is more daintily built than Vulpes vulpes.[6] The tail is bushy with a prominent black tip which distinguishes it from V. vulpes. Back of ears are dark brown with black margin. Its rhinarium is naked and the lips are black, with small black hair patches on upper part of nuzzle (shaft) in front of eyes. The ears have the same colour as the nape or maybe darker, but not having a dark patch as in V. vulpes. Extensive variation in coat colour exists across populations and seasonally within populations, but generally varies from grey to pale brown. The head and body length is 18 in (46 cm), with a 10 in (25 cm) long tail. Typical weight is 5 to 9 pounds (2.3 to 4.1 kg).[3]

The genus Vulpes can be separated from Canis and Cuon in the Indian region by the flat forehead between the postorbital processes and not inflated by air cells. The processes themselves are slightly concave with a raised anterior edge (convexly round in other canids). The canine teeth are longer.[7] 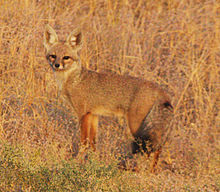 The species is found throughout much of the Indian subcontinent with the exception of the wet forests and the extreme arid zone. The distribution is bounded by the Himalayan range and the Indus river valley. The preferred habitat is short open grassland, scrub or thorn forest. They appear to avoid steep terrain, tall grassland.[3] Indian foxes were considered to be habitat generalists, but recent studies have shown a strong preference for semi-arid short grassland habitats at multiple scales.[8]

The Bengal fox is mainly crepuscular in its habits. During the heat of the day, they hide under vegetation or in subterranean dens that they dig. The dens are large and complex with multiple chambers and escape routes. They are sometimes seen basking at a vantage point around sunrise or sunset.[9] In captivity, the lifespan is about 6 to 8 years.[3]

The Bengal fox feeds on rodents, reptiles, crabs, termites, insects, small birds, and fruits.[10] Scats of young pups appeared to show that they fed mainly on rodents[11] but are opportunistic feeders.[9]

Foxes make a wide range of vocalizations. A chattering cry is the most common call. They also growl, whine, whimper and bark. The Bengal fox does not appear to have latrine behaviour, a feature seen in some social canids, in which all members defecate at specific spots.[9]

The Bengal fox forms pair bonds that may last a lifetime, but extra-pair copulations are known to occur. Throughout most of its range, the mating season starts in autumn (usually October–November) and after a gestation period approximately 50–60 days, two to four pups are born in a den. Both parents participate in pup-rearing. The pups are fully weaned about 3–4 months after emerging from the den. Pup mortality is high during the first few months.[12] Pups may sometimes be nursed by multiple females.[9] During the day they tend to rest under shrubs and bushes, except in summer when they rest in dens.

Lack of habitat protection is perhaps the greatest threat to the Indian fox. For example, in southern India, less than two percent of potential Indian fox habitat is covered under the existing protected area network of the states of Karnataka and Andhra Pradesh .[13] Hunting for its skin and flesh as well as conversion of its grassland habitat to agriculture, industry and increasingly bio-fuel plantations, have affected its population density. In addition, its body parts are used in traditional medicine, and in some areas it is eaten. They are hunted by the narikuruva tribes of southern India.[9] In Karnataka, they are captured in rituals conducted during Sankranthi.[3] Another major threat is disease such as canine distemper virus and rabies, which spills over from the large unvaccinated populations of free-ranging dogs that are found throughout its range.[14]