Darwin's fox or Darwin's Zorro (Lycalopex fulvipes) is a small critically endangered canine from the genus Lycalopex. It is also known as the Zorro Chilote or Zorro de Darwin[2] in Spanish and lives on Nahuelbuta National Park, (Araucanía Region), the Valdivian Coastal Range (Los Ríos Region) in mainland Chile and Chiloé Island.[3]

Darwin's fox was first collected from San Pedro Island off the coast of Chile by the naturalist Charles Darwin in 1834. It was long held that Darwin's fox was a subspecies of the South American gray fox (L. griseus); however, the discovery of a small population of Darwin's fox on the mainland in Nahuelbuta National Park in 1990[4] and subsequent genetic analysis has clarified the fox's status as a unique species.[5] In 2012 and 2013 the presence of the Darwin's fox at Oncol Park, Alerce Costero National Park and the Valdivian Coastal Reserve was confirmed through camera trapping.[3]

Pseudalopex is a South American genus of canine distantly related to wolves and is technically not a fox. When Charles Darwin collected a specimen from San Pedro Island in Chiloé Archipelago in December 1834 during the Beagle survey expedition, he observed that this "fox (of Chiloe, a rare animal) sat on the point & was so absorbed in watching [survey work], that he allowed me to walk behind him & actually kill him with my geological hammer".[6] In the 1839 publication of his Journal and Remarks, Darwin said "This fox, more curious or more scientific, but less wise, than the generality of his brethren, is now mounted in the museum of the Zoological Society." He said it was "an undescribed species",[7] indicating that it was distinct from the species (L. culpaeus and L. griseus) that occur on the mainland. Later, Darwin's fox was classified as a subspecies (Lycalopex griseus fulvipes) of the latter.

Darwin's fox does not interbreed with the other Lycalopex species, only lives in forests, and is smaller and darker-colored than the other species. In 1990 a small population of Darwin's fox was found on the mainland in the forested Nahuelbuta National Park, indicating that the fox was not endemic to the island. According to Yahnke et al., in their 1996 article published in the Journal of the Society for Conservation Biology, analysis of mitochondrial DNA of Darwin's fox and the gray fox showed two patterns, indicating Darwin's fox was a new species, closely related to the Sechuran fox. Also according to Yahnke (1995; et al.1996) the present restricted range is a relic of a much wider former range. Zoologists noted the distinctiveness in the ecological niche, appearance, and behavior of this species. Darwin's fox is differentiated from the gray fox in being darker; having shorter legs; a broader, shorter skull; smaller auditory bullae; a more robust dentition; and a different jaw shape and style of premolar occlusion. 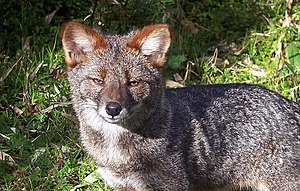 In the late Pleistocene, Chiloé Island was connected to mainland Chile by a land bridge. The land bridge was severed about 15,000 years ago when the sea level rose following the last glaciation.[8] This created two isolated populations of Darwin's fox.

Darwin's fox has a vast diet. In dense forests, where it exists, the foxes hunt for mammals, reptiles, beetles, and invertebrates. Sometimes it selects fruits and berries. Birds and amphibians to a lesser degree are also consumed. It sometimes eats carrion, but it mostly eats live animals and fruit. This makes it mostly an omnivore, sometimes a scavenger.

Darwin's fox is generally believed to be a forest obligate species found only in southern temperate rainforests.[2] They only occur in areas of primary forest on Chiloé and on the mainland. They are most active at twilight and before sunrise.. The population of Chiloé has about 200 individuals, and Nahuelbuta on the mainland contains about 50 individuals. The total population size is about 250 mature individuals with at least 90% of the population occurring in one subspopulation (Chiloé Island). Although the species is protected in Nahuelbuta National Park, substantial mortality sources exist when foxes move to lower, unprotected private areas in search of milder conditions during the winter.[9]

It is believed that there are only 250 Darwin's foxes on Chiloé Island and up to 70 on the mainland, and they are listed as critically endangered by the World Conservation Union.[2] Fragmentation of forest adjacent to the national park and on the island is a concern for their conservation, and feral dogs may pose the greatest threat to their survival by spreading disease or directly attacking. Persecution by people who think that the foxes attack domestic fowls, though they pose little threat, is also a potential problem.