Jump to content
From Wikipedia
Not to be confused with the fisher (animal), sometimes called a fisher cat.

The fishing cat (Prionailurus viverrinus) is a medium-sized wild cat of South and Southeast Asia. In 2008, the IUCN classified the fishing cat as endangered since they are concentrated primarily in wetland habitats, which are increasingly being settled, degraded and converted. Over the last decade, the fishing cat population throughout much of its Asian range declined severely.[2]

Like its closest relative, the leopard cat, the fishing cat lives along rivers, streams and mangrove swamps. It is well adapted to this habitat, being an eager and skilled swimmer.

Fishing cat at the Cincinnati Zoo

Fishing cats are the largest of the Prionailurus cats. They are about twice the size of a domestic cat and have a stocky, muscular build with medium to short legs. The coarse fur is olive-grey with dark spots arranged in horizontal streaks running along the length of the body. The face is elongated with a distinctly flat nose and ears set far back on the head. The underside is white, and the back of the ears are black with central white spots. There are a pair of dark stripes around the throat, and a number of black rings on the tail. Their head-to-body length typically ranges from 57–78 cm (22–31 in), with a short tail of 20–30 cm (7.9–11.8 in), which is one half to one third the length of the rest of the animal. They weigh from 5–16 kg (11–35 lb).[3] The face is spotted and the ears are short and rounded. Black spots run longitudinally across the body, and six to eight dark stripes run from behind the eyes to the nape. The underside fur is longer and often overlaid with spots.[4]

Their feet are less completely webbed than those of leopard cats, their claws incompletely sheathed.[5] Webbed feet have often been noted as a characteristic of the fishing cat, but the webbing beneath the toes is not much more developed than that of a bobcat.[6] 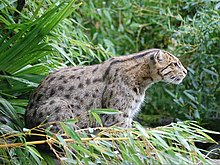 Fishing cats are broadly but discontinuously distributed in Asia, and are primarily found in the Terai region of the Himalayan foothills in India and Nepal, in eastern India, Bangladesh and Sri Lanka. There are no recent records from Pakistan, and no confirmed records from Peninsular Malaysia and Vietnam.[2] The island of Java constitutes the eastern limit of their range, but by the 1990s they were already scarce and apparently restricted to tidal forests with sandy or muddy shores, older mangrove stands, and abandoned mangrove plantation areas with fishponds.[7]

In March 2003, a single fishing cat was photographed by a camera trap in Kulen Promtep Wildlife Sanctuary, northern Cambodia.[8] In January 2008, their presence was confirmed in Botum-Sakor National Park, southwest Cambodia.[9] Populations have also been documented in Thailand.[10] Fishing cats were the least detected cats with only six photos obtained altogether in Kaeng Krachan National Park, Khao Sam Roi Yot National Park and Thale Noi Non-hunting Area.[11] There are no confirmed records from Laos.[12]

Fishing cats are strongly associated with wetland, are typically found in swamps and marshy areas, oxbow lakes, reed beds, tidal creeks and mangrove areas and are more scarce around smaller, fast-moving watercourses. Most records are from lowland areas. Although fishing cats are widely distributed through a variety of habitat types including both evergreen and tropical dry forest, their occurrence tends to be highly localized.[13] They have been reported at elevations up to 5,000 ft (1,500 m) in the Indian Himalayas.[14] 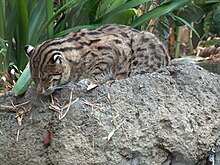 A fishing cat at the San Diego Zoo. Note the ocelli on the backs of the cat's ears.

Fishing cats are thought to be primarily nocturnal. Adult males and females without dependent young are solitary animals. They are very much at home in the water and can swim long distances, even under water. Females have been reported to range over areas of 4 to 6 km2 (1.5 to 2.3 sq mi), while males range over 16 to 22 km2 (6.2 to 8.5 sq mi). Adults have been observed to make a "chuckling" sound and likely have other calls similar to those of domestic cats.[3]

As the name implies, fish are their main prey. A one-year study of scat collected in India's Keoladeo National Park found that fish comprises approximately three-quarters of their diet, with the remainder consisting of birds, insects, and small rodents. Molluscs, reptiles including snakes, amphibians and carrion of domestic cattle supplement their diet.[15] They hunt along the edges of watercourses, grabbing prey from the water, and sometimes diving into the water to catch prey further from the banks.[16]

Wild fishing cats most likely mate during January and February; most kittens in the wild were observed during March and April.[3] In captivity, the gestation period lasts 63–70 days; females give birth to two or three kittens.[18] They weigh around 170 g (6.0 oz) at birth, and are able to actively move around by the age of one month. They begin to play in water and to take solid food when about two months of age, but are not fully weaned until six months old. They reach full adult size when about eight and a half months old, acquire their adult canine teeth by 11 months, and are sexually mature when approximately 15 months old. They live up to 10 years in captivity.[3]

Fishing cat are endangered due to their dependence on wetlands, which are increasingly being settled and converted for agricultural use, and also due to human over-exploitation of local fish stocks. It is believed to be extirpated in Afghanistan, it may already be gone from Malaysia and China, and it has become rare throughout its remaining distribution range.[2]

Fishing cat photographed in the wild

Prionailurus viverrinus is included on CITES Appendix II, and protected by national legislation over most of its range. Hunting is prohibited in Bangladesh, Cambodia, China, India, Indonesia, Myanmar, Nepal, Pakistan, Sri Lanka, Thailand. Hunting regulations apply in Lao PDR. In Bhutan and Vietnam, the species is not protected outside protected areas.[13]

In Sri Lanka, the fishing cat is known as Handoon Deeva.[19] This name and Kola Diviya are used by local people to also refer to the rusty-spotted cat (Prionailurus rubiginosus), another little-known small cat in suburban areas of Sri Lanka. As both cat species are nocturnal and elusive, it is usually uncertain which one is referred to by either of these names.[20]

In Garhwal Himalaya it is called Chaurya Bagh.[citation needed]. It is also referred to as "bavuru pilli" among the locals of the mangrove regions of coastal Andhra Pradesh.[25]