The Asian golden cat (Pardofelis temminckii, syn. Catopuma temminckii), also called the Asiatic golden cat and Temminck's cat, is a medium-sized wild cat of Southeastern Asia. In 2008, the IUCN classified Asian golden cats as Near Threatened, stating that the species comes close to qualifying as Vulnerable due to hunting pressure and habitat loss, since Southeast Asian forests are undergoing the world's fastest regional deforestation.[1]

The Asian golden cat was named in honor of the Dutch zoologist Coenraad Jacob Temminck, who first described the African golden cat in 1827.[2]

Illustration of skulls of Asian golden cat (bottom) and fishing cat (top), in Pocock's The Fauna of British India, including Ceylon and Burma[3]

The pelage is uniform in color, but highly variable, ranging from red to golden-brown, dark brown to pale cinnamon, and gray to black. Transitional forms among the different colorations also exist. It may be marked with spots and stripes. White and black lines run across the cheeks and up to the top of the head, while the ears are black with a central gray area.[2] Golden cats with leopard-like spots have been found in China, resembling large leopard cats. This spotted fur is a recessive characteristic.[4]

Asian golden cats live throughout Southeast Asia, ranging from Tibet, Nepal, Bhutan, India and Bangladesh to Myanmar, Thailand, Cambodia, Laos, Vietnam, Southern China, Malaysia and Sumatra. They prefer forest habitats interspersed with rocky areas and are found in dry deciduous, subtropical evergreen and tropical rainforests.[5] Sometimes, they are found in more open terrain such as the grasslands of Assam's Manas National Park.[6] In altitude, they range from the lowlands to over 3,000 m (9,800 ft) in the Himalayas.[7]

In Laos, they also inhabit bamboo regrowth, scrub and degraded forest from the Mekong plains to at least 1,100 m (3,600 ft).[8] Surveys in Sumatra and in the Nam Et-Phou Louey National Protected Area in northern Laos indicated that they are more common than sympatric small cats, suggesting that they are more numerous than previously believed.[9][10] Surveys in Thailand, northern Myanmar and India's western Arunachal Pradesh revealed fewer individuals.[11][12][13]

Since Hodgson's description in 1831 of a male individual in Nepal under the binomial Felis moormensis, the country is believed to be the westernmost part of the felid's range.[16][17] However, no specimen has been recorded in the country, until in May 2009 a camera trap survey yielded the first photographic record of a melanistic Asian golden cat in Makalu Barun National Park at an altitude of 2,517 m (8,258 ft).[18]

Three subspecies have been recognized:[19]

These trinomials do not yet reflect the taxonomic re-classification accepted since 2006.[1] 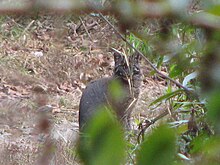 Asian golden cat with a piece of meat

Asian golden cats are territorial and solitary. Previous observations suggested that they are primarily nocturnal, but a field study on two radio-collared specimens revealed arrhythmic activity patterns dominated by crepuscular and diurnal activity peaks, with much less activity late at night. In the study, the male's territory was 47.7 km2 (18.4 sq mi) in size and increased by more than 15% during the rainy season. The female's territory was 32.6 square kilometres (12.6 sq mi) in size. Both cats traveled between only 55 metres (180 ft) to more than 9 kilometres (5.6 mi) in a day and were more active in July than in March.[20]

Asian golden cats can climb trees when necessary. They hunt birds, hares, rodents and reptiles, small ungulates such as muntjacs and young sambar deer.[5] They are capable of bringing down prey much larger than themselves, such as domestic water buffalo calves.[21] In the mountains of Sikkim, they reportedly prey on ghoral.[22]

In captivity, Asian golden cats kill small prey with a nape bite, as is typical of felids. They also pluck birds larger than pigeons before beginning to feed. Their vocalizations include hissing, spitting, meowing, purring, growling, and gurgling. Other methods of communication observed in captive Asian golden cats include scent marking, urine spraying, raking trees and logs with claws, and rubbing of the head against various objects, much like a domestic cat.[2]

Not much is known about the reproductive behavior of this rather elusive cat in the wild. Most of what is known has been learned from cats in captivity.[23] Female Asian golden cats are sexually mature between 18 and 24 months, while males mature at 24 months. Females come into estrus every 39 days, at which time they leave markings and seek contact with the male by adopting receptive postures.[24] During intercourse, the male will seize the skin of the neck of the female with his teeth. After a gestation period of 78 to 80 days, the female gives birth to a litter of one to three kittens in a sheltered place. The kittens weigh 220 to 250 grams (7.8 to 8.8 oz) at birth, but triple in size over the first eight weeks of life. They are born already possessing the adult coat pattern and open their eyes after six to twelve days.[2] In captivity, they live for up to twenty years.[25]

A female Asian golden cat at the Washington Park Zoo (now the Oregon Zoo) showed a dramatic increase in the frequency of scent marking during estrus. At the same time, she often rubbed her neck and head on inanimate objects. She also repeatedly approached the male in the cage, rubbed on him, and adopted a receptive posture (lordosis) in front of him. The male's rate of scent marking increased during this time, as did his frequency of approaching and following the female. The male's mounting behavior included a nape bite, but in contrast to other small felids, the bite was not sustained.[citation needed]

Asian golden cats inhabit some of the fastest developing countries in the world, where they are increasingly threatened by habitat destruction following deforestation, along with a declining ungulate prey base.[1] Another serious threat is hunting for the illegal wildlife trade, which has the greatest potential to do maximum harm in minimal time.[5] It has been reported killed in revenge for depredating livestock, including poultry but also larger animals such as sheep, goats and buffalo calves.

Asian golden cats are poached mainly for their fur.[11] In Myanmar, 111 body parts from at least 110 individuals were observed in four markets surveyed between 1991 and 2006. Numbers were significantly greater than those of non-threatened species. Among the observed skins was a specimen with ocelot-like rosettes — a rare tristis form. Three of the surveyed markets are situated on international borders with China and Thailand and cater to international buyers, although the Asian golden cat is completely protected under Myanmar's national legislation. Effective implementation and enforcement of CITES is considered inadequate.[26]

Pardofelis temminckii is included in CITES Appendix I and fully protected over most of its range. Hunting is prohibited in Bangladesh, China, India, Indonesia, Malaysia, Myanmar, Nepal, Thailand and Vietnam. Hunting is regulated in Laos. No information about protection status is available from Cambodia.[5] In Bhutan, the felid is protected only within the boundaries of protected areas.[14]

The population size of the Asian golden cat is unknown and difficult to estimate. It was regarded as abundant in many countries until the later part of the last century, when poaching shifted away from tigers and leopards to this species. In China, it is reported to be the next rarest cat apart from tigers and leopards.[citation needed]

As of December 2008, there were 20 Asian golden cats in eight European zoos participating in the European Endangered Species Programme. The pair in the German Wuppertal Zoo successfully bred in 2007, and in July 2008, two siblings were born and mother-reared. In 2008, a female kitten was also born in the French Parc des Félins. The species is also kept in the Singapore Zoo.[27] Apart from these, a few zoos in Southeast Asia and Australia also keep Asian golden cats.

The Asian golden cat bears a great resemblance to the African golden cat, but it is unlikely that they are closely related because the forests of Africa and Asia have not been connected in over 20 million years. Their similarity is more likely an example of convergent evolution.

In some regions of Thailand, the Asian golden cat is called Seua fai ("fire tiger"). According to a regional legend, the burning of an Asian golden cat's fur drives tigers away. Eating the flesh is believed to have the same effect. The Karen people believe that simply carrying a single hair of the cat is sufficient.[29] Many indigenous people believe the cat to be fierce, but in captivity it has been known to be docile and tranquil.

In China, the Asian golden cat is thought to be a kind of leopard and is known as "rock cat" or "yellow leopard". Different color phases have different names; those with black fur are called "inky leopards", and those with spotted coats are called "sesame leopards".[2]