The common dwarf mongoose is a typical mongoose: it has a large pointed head, small ears, a long tail, short limbs, and long claws. The species can be distinguished from other mongooses by its size. It is much smaller than most other species (18 to 28 cm, 210 to 350 grams); in fact, it is Africa's smallest carnivore. The soft fur is very variable in color, ranging from yellowish red to very dark brown.

Dwarf mongoose from the Sabi Sands region of South Africa.

The species ranges from East to southern Central Africa, from Eritrea and Ethiopia to the Transvaal in South Africa. 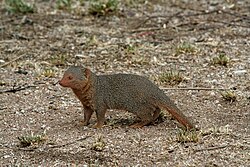 Common dwarf mongoose in the Serengeti

The common dwarf mongoose is a diurnal animal. It is a highly social species that lives in extended family groups of two to thirty animals. There is a strict hierarchy among same-sexed animals within a group, headed by the dominant pair (normally the oldest group members). All group members cooperate in helping to rear the pups and in guarding the group from predators.

Young mongooses attain sexual maturity by one year of age but delay dispersal, with males usually emigrating (in the company of their brothers) at 2-3 years old. Dispersing males may join other established groups, either as subordinates or by ousting the resident males, or they may found new groups with unrelated dispersing females. In contrast, females normally remain in their home group for life, queuing for the dominant position. They will, however, emigrate to found a new group if they lose their place in the hierarchy to a younger sister.

Dwarf mongooses tend to breed during the wet season, between October and April, raising up to three litters. Usually only the group's dominant female becomes pregnant, and she is responsible for 80% of the pups reared by the group. If conditions are good, subordinate females may also become pregnant, but their pups rarely survive. After the gestation period of 53 days, 4-6 young are born. They remain below ground within a termite mound for the first 2-3 weeks. Normally one or more members of the group stay behind to babysit while the group goes foraging. Subordinate females often produce milk to feed the dominant female's pups. At 4 weeks of age the pups begin accompanying the group. All group members help to provide them with prey items until they are around 10 weeks old.

A mutualistic relationship has evolved between dwarf mongooses and hornbills, in which hornbills seek out the mongooses in order for the two species to forage together, and to warn each other of nearby raptors and other predators.[2]