The leopard cat (Prionailurus bengalensis) is a small wild cat of South and East Asia. Since 2002 it has been listed as Least Concern by IUCN as it is widely distributed but threatened by habitat loss and hunting in parts of its range. There are twelve leopard cat subspecies, which differ widely in appearance.[2]

The leopard cat's name is derived from the leopard-like spots prevalent in all subspecies, but its relation to the leopard is distant.

A leopard cat is about the size of a domestic cat, but more slender, with longer legs and well-defined webs between its toes. Its small head is marked with two prominent dark stripes and a short and narrow white muzzle. There are two dark stripes running from the eyes to the ears, and smaller white streaks running from the eyes to the nose. The backs of its moderately long and rounded ears are black with central white spots. Body and limbs are marked with black spots of varying size and color, and along its back are two to four rows of elongated spots. The tail is about half the size of its head-body length and is spotted with a few indistinct rings near the black tip. The background color of the spotted fur is tawny, with a white chest and belly. However, in their huge range, they vary so much in coloration and size of spots as well as in body size and weight that initially they were thought to be several different species. The fur color is yellowish brown in the southern populations, but pale silver-grey in the northern ones. The black markings may be spotted, rosetted, or may even form dotted streaks, depending on subspecies. In the tropics, leopard cats weigh 0.55 to 3.8 kg (1.2 to 8.4 lb), have head-body lengths of 38.8 to 66 cm (15.3 to 26.0 in), with long 17.2 to 31 cm (6.8 to 12.2 in) tails. In northern China and Siberia, they weigh up to 7.1 kg (16 lb), and have head-body lengths of up to 75 cm (30 in); generally, they put on weight before winter and become thinner until spring.[3] Shoulder height is about 41 cm (16 in).

Leopard cats are the most widely distributed Asian small cats. Their range extends from the Amur region in the Russian Far East over the Korean Peninsula, China, Indochina, the Indian Subcontinent, to the West in northern Pakistan, and to the south in the Philippines and the Sunda islands of Indonesia. They are found in agriculturally used areas but prefer forested habitats. They live in tropical evergreen rainforests and plantations at sea level, in subtropical deciduous and coniferous forests in the foothills of the Himalayas at altitudes above 1,000 m (3,300 ft).[3]

In 2009, a leopard cat was camera trapped in Nepal’s Makalu-Barun National Park at an altitude of 3,254 m (10,676 ft). At least six individuals inhabit the survey area, which is dominated by associations of rhododendron, oak and maple.[4] The highest altitudinal record was obtained in September 2012 at 4,500 m (14,800 ft) in the Kanchenjunga Conservation Area.[5]

In the northeast of their range they live close to rivers, valleys and in ravine forests, but avoid areas with more than 10 cm (3.9 in) of snowfall.[6] They are rare in Pakistan’s arid treeless areas.[7] In Afghanistan, they were reported in the 1970s from Jalalkot and Norgul in the Kunar Valley, and the Waygul forest of Dare Pech.[8]

Illustration of Javan leopard cat from Richard Lydekker's "A hand-book to the Carnivora", 1896 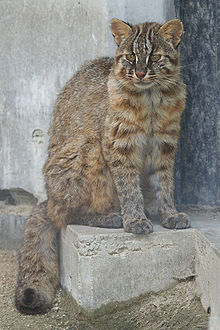 The Iriomote cat has been proposed as a species since 1967, but following mtDNA analysis in the 1990s it is now considered a subspecies of the leopard cat.[2][16] 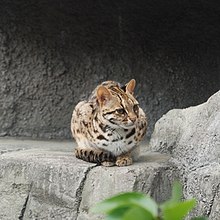 Leopard cats are solitary, except during breeding season. Some are active during the day, but most hunt at night, preferring to stalk murids, tree shrews and hares. They are agile climbers and quite arboreal in their habits. They rest in trees, but also hide in dense thorny undergrowth on the ground.[10] In the oil palm plantations of Sabah, they have been observed up to 4 m (13 ft) above ground hunting rodents and beetles. In this habitat, males had larger home ranges than females, averaging 3.5 km2 (1.4 sq mi) and 2.1 km2 (0.81 sq mi) respectively. Each male's range overlapped one or more female ranges.[19]

Leopard cats can swim, but seldom do so. They produce a similar range of vocalisations to the domestic cat. Both sexes scent mark their territory by spraying urine, leaving faeces in exposed locations, head rubbing, and scratching.[3]

Leopard cats are carnivorous, feeding on a variety of small prey including mammals, lizards, amphibians, birds and insects. In most parts of their range, small rodents such as rats and mice form the major part of their diet, which is often supplemented with grass, eggs, poultry, and aquatic prey. They are active hunters, dispatching their prey with a rapid pounce and bite. Unlike many other small cats, they do not "play" with their food, maintaining a tight grip with their claws until the animal is dead. This may be related to the relatively high proportion of birds in their diet, which are more likely to escape when released than are rodents.[3]

There is no fixed breeding period in the southern part of its range; in the colder northern range they tend to breed around March or April, when the weather is mild enough to support newborn kittens. The estrus period lasts for 5–9 days.[citation needed] If the kittens do not survive, the female may come into heat again and have another litter that year.

After a gestation period of 60–70 days, two to four kittens are born in a den, where they remain until they are a month old. The kittens weigh about 75 to 130 grams (2.6 to 4.6 oz) at birth and usually double their weight by age of two weeks; at five weeks, they are four times their birth weight. The eyes open at ten days, and the kittens start to eat solid food at 23 days. At the age of four weeks, the permanent canines appear, and the kittens begin to eat solid food. Leopard cats have lived for up to thirteen years in captivity.[3]

Leopard cats usually pair for life and raise their kittens together for about 7 to 10 months.[citation needed] Full maturity is reached at 18 months, but in captivity, the male can become ready to breed at 7 months, and the female at 10 months. 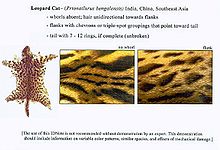 In China, leopard cats are hunted mainly for their fur. Between 1984 and 1989, about 200,000 skins were exported yearly. A survey carried out in 1989 among major fur traders revealed more than 800,000 skins on stock. Since the European Union imposed an import ban in 1988, Japan has become the main buyer, and imported 50,000 skins in 1989.[20] Although commercial trade is much reduced, the species continues to be hunted throughout most of its range for fur, for food, and as pets. They are also widely viewed as poultry pests and killed in retribution.[2]

In Myanmar, 483 body parts of at least 443 individuals were observed in four markets surveyed between 1991 and 2006. Numbers were significantly larger than non-threatened species. Three of the surveyed markets are situated on international borders with China and Thailand, and cater to international buyers, although the leopard cat is completely protected under Myanmar's national legislation. Effective implementation and enforcement of CITES is considered inadequate.[21] 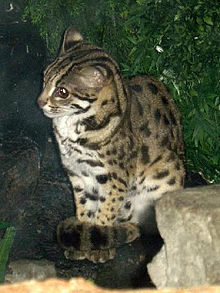 A leopard cat at the Bronx Zoo

Prionailurus bengalensis is listed in CITES Appendix II. In Hong Kong, the species is protected under the Wild Animals Protection Ordinance Cap 170. The population is well over 50,000 individuals and, although declining, the cat is not endangered.[2]

The Tsushima leopard cat is listed as critically endangered on the Japanese Red List of endangered species, and has been the focus of a conservation program funded by the Japanese government since 1995.[17]

In 1792, Robert Kerr first described a leopard cat under the binominal Felis bengalensis in his translation of Carl von Linné’s Systema Naturae as being native to southern Bengal.[22] Between 1829 and 1922, different authors of 20 more descriptions classified the cat either as Felis or Leopardus.[12] Owing to the individual variation in fur colour, leopard cats from British India were described as Felis nipalensis from Nepal, Leopardus ellioti from the area of Bombay, Felis wagati and Felis tenasserimensis from Tenasserim. In 1939, Reginald Innes Pocock subordinated them to the genus Prionailurus. The collection of the Natural History Museum in London comprised several skulls and large amounts of skins of leopard cats from various regions. Based on this broad variety of skins, he proposed to differentiate between a southern subspecies Prionailurus bengalensis bengalensis from warmer latitudes to the west and east of the Bay of Bengal, and a northern Prionailurus bengalensis horsfieldi from the Himalayas, having a fuller winter coat than the southern. His description of leopard cats from the areas of Gilgit and Karachi under the trinomen Prionailurus bengalensis trevelyani is based on seven skins that had longer, paler and more greyish fur than those from the Himalayas. He assumed that trevelyani inhabits more rocky, less forested habitats than bengalensis and horsfieldi.[23]

Between 1837 and 1930, skins and skulls from China were described as Felis chinensis, Leopardus reevesii, Felis scripta, Felis microtis, decolorata, ricketti, ingrami, anastasiae and sinensis, and later grouped under the trinomen Felis bengalensis chinensis.[12] In the beginning of the 20th century, a British explorer collected wild cat skins on the island of Tsushima. Oldfield Thomas classified these as Felis microtis, which had been first described by Henri Milne-Edwards in 1872.[24]

Two skins from Siberia motivated Daniel Giraud Elliot to write a detailed description of Felis euptilura in 1871. One was depicted in Gustav Radde’s illustration cum description of a wild cat; the other was part of a collection at the Regent's Park Zoo. The ground colour of both was light brownish-yellow, strongly mixed with grey and covered with reddish-brown spots, head grey with a dark-red stripe across the cheek.[25] In 1922, Tamezo Mori described a similar but lighter grey spotted skin of a wild cat from the vicinity of Mukden in Manchuria that he named Felis manchurica.[26] Later both were grouped under the trinomen Felis bengalensis euptilura.[12] In the 1970s and 1980s, the Russian zoologists Geptner, Gromov and Baranova disagreed with this classification. They emphasized the differences of skins and skulls at their disposal and the ones originating in Southeast Asia, and coined the term Amur forest cat, which they regarded as a distinct species.[27][28] In 1987, Chinese zoologists pointed out the affinity of leopard cats from northern China, Amur cats and leopard cats from southern latitudes. In view of the morphological similarities they did not support classifying the Amur cat as a species.[29]

The initial binomial euptilura given by Elliott[25] was eventually changed to euptilurus referring to the ICZN Principle of Gender Agreement; at present, both terms are used.[30]

Leopard cat and hybrids as pets[edit]

In the USA, P. bengalensis is listed as endangered under the Endangered Species Act since 1976; except under permit, it is prohibited to import, export, sell, purchase and transport the felid in interstate commerce.[31]

Keeping a leopard cat as a pet requires a license in most places. License requirements vary by location.[32]

The Asian leopard cat (P. b. bengalensis) is mated with a domestic cat to produce hybrid offspring known as the Bengal cat. This hybrid is usually permitted to be kept as pet without a license. For the typical pet owner, a Bengal cat should be at least four generations (F4) removed from the leopard cat. The "foundation cats" from the first three filial generations of breeding (F1–F3) are usually reserved for breeding purposes or the specialty-pet home environment.[33]