The binturong (Lua error in package.lua at line 80: module 'Module:IPAc-en/data' not found. BIN-too-rong) (Arctictis binturong), also known as bearcat, is a viverrid native to South and Southeast Asia. It is uncommon in much of its range, and listed as Vulnerable by IUCN because of a declining population trend that is estimated at more than 30% over the last three decades.[2] Thomas Stamford Raffles first described a specimen from Malacca where it is called binturung.[3] In standard Malay, it is known as benturung, and in Riau, Indonesia, as tenturun.[4]

The body of the binturong is long and heavy, and low on the legs. It has a thick fur of strong black hair. The bushy and prehensile tail is thick at the root, gradually diminishing in size to the extremity, where it curls inwards. The muzzle is short and pointed, somewhat turned up at the nose, and is covered with bristly hairs, brown at the points, which lengthen as they diverge, and form a peculiar radiated circle round the face. The eyes are large, black and prominent. The ears are short, rounded, edged with white, and terminated by tufts of black hair. There are six short rounded incisors in each jaw, two canines, which are long and sharp, and six molars on each side. The hair on the legs is short and of a brownish tinge. The feet are five-toed, with large strong claws; the soles are bare, and applied to the ground throughout the whole of their length; the hind ones are longer than the fore.[3]

In general build the binturong is essentially like Paradoxurus and Paguma but more massive in the length of the tail, legs and feet, in the structure of the scent glands and larger size of rhinarium, which is more convex with a median groove being much narrower above the philtrum. The contour hairs of the coat are much longer and coarser, and the long hairs clothing the whole of the back of the ears project beyond the tip as a definite tuft. The anterior bursa flap of the ears is more widely and less deeply emarginate. The tail is more muscular, especially at the base, and in colour generally like the body, but commonly paler at the base beneath. The body hairs are frequently partly whitish or buff, giving a speckled appearance to the pelage, sometimes so extensively pale that the whole body is mostly straw-coloured or grey, the young being often at all events paler than the adults, but the head is always closely speckled with grey or buff. The long mystacial vibrissae are conspicuously white, and there is a white rim on the summit of the otherwise black ear. The glandular area is whitish.[5]

The binturong is the largest living species of the Viverridae, only rivaled by the African civet.[10] Females are 20% larger than males.[11]

Binturongs occur from India, Nepal, Bangladesh, Bhutan, Myanmar, Thailand, Malaysia to Laos, Cambodia, Vietnam and Yunnan in China, and from Sumatra, Kalimantan and Java in Indonesia to Palawan in the Philippines.[2]

Binturongs are confined to tall forest.[12] They are not uncommon in the forested plains and hills throughout Assam, but more common in foothills and hills with good tree cover. They have been recorded in Manas National Park, in Dulung and Kakoi Reserved Forests of the Lakhimpur district, in the hill forests of Karbi Anglong, North Cachar Hills, Cachar and Hailakandi Districts.[13] In Myanmar, binturongs were photographed on the ground in the Tanintharyi Nature Reserve at an altitude of 60 m (200 ft), in the Hukaung Valley at altitudes from 220–280 m (720–920 ft), in the Rakhine Yoma Elephant Reserve at 580 m (1,900 ft) and at three other sites up to 1,190 m (3,900 ft) elevation.[14] In Thailand's Khao Yai National Park, several individuals were observed feeding in a fig tree and on a vine.[15] In Laos, they have been observed in extensive evergreen forest.[16] In Malaysia, binturongs were recorded in secondary forest surrounding a palm estate that was logged in the 1970s.[17] In Palawan, they are found in primary and secondary lowland forest, including grassland–forest mosaic from sea level to 400 m (1,300 ft).[18]

Nine subspecies have been recognized forming two clades. The northern clade from mainland Asia has been separated from the Sundaic clade by the Isthmus of Kra.[19] 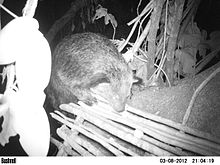 Binturongs are active during the day and at night.[15][16] Three sightings in Pakke Wildlife Sanctuary were by day.[21] Thirteen camera trap photograph events in Myanmar involved one around dusk, seven in full night and five in broad daylight. All photographs were of single animals, and all were taken on the ground. As binturongs are not very nimble, they may have to descend to the ground relatively frequently when moving between trees.[14]

Five radio-collared binturongs in the Phu Khieo Wildlife Sanctuary exhibited an arrhythmic activity dominated by crepuscular and nocturnal tendencies with peaks in the early morning and late evening. Reduced inactivity periods occurred from midday to late afternoon. They moved between 25 m (82 ft) and 2,698 m (8,852 ft) daily in the dry season and increased their daily movement to 4,143 m (13,593 ft) in the wet season. Ranges sizes of males varied between 0.9 km2 (0.35 sq mi) and 6.1 km2 (2.4 sq mi). Two males showed slightly larger ranges in the wet season. Their ranges overlapped between 30–70%.[22] The average home range of a radio-collared female in the Khao Yai National Park was estimated at 4 km2 (1.5 sq mi), and the one of a male at 4.5 to 20.5 km2 (1.7 to 7.9 sq mi).[23]

They are essentially arboreal. Pocock observed the behaviour of several captive binturongs in the London Zoological Gardens. When resting they lie curled up, with the head tucked under the tail. They never leap, but climb skilfully, albeit slowly, progressing with equal ease and confidence along the upper side of branches or, upside down, beneath them, the prehensile tail being always in readiness as a help, and they descend the vertical bars of the cage head first, gripping them between their paws and using the prehensile tail as a check. When irritated they growl fiercely, and when on the prowl may periodically utter a series of low grunts or a hissing sound made by expelling the air through partially opened lips.[5]

Binturongs move about gently, often coming to a stop, and often using the tail to keep balance, clinging to a branch. They show a pronounced comfort behaviour associated with grooming the fur, shaking and licking the hair, and scratching. Shaking is the most characteristic element of comfort behaviour.[24]

Although they are sympatric with several potential predators, including leopards, clouded leopards and reticulated pythons, predation on adults is reportedly quite rare. Normally quite shy, they can be aggressive when harassed. It is reported to initially urinate or defecate on a threat and then, if teeth-baring and snarling does not additionally deter the threat, will use its powerful jaws and teeth in self-defense.[27]

Binturongs are omnivorous, feeding on small mammals, birds, fish, earthworms, insects and fruits.[7] Captive binturongs are particularly fond of plantains, but would also eat fowls' heads and eggs.[3] They also prey on rodents.[12] Fish and earthworms are likely unimportant items in their diet, as they are neither aquatic nor fossorial, coming across such prey only when opportunities present themselves. Since they do not have the attributes of a predatory mammal, most of the binturong's diet is probably of vegetable matter.[5] Figs are a major component of their diet.[15][21][28]

The binturong is an important agent for seed dispersal, especially for those of the strangler fig, because of its ability to scarify the seed's tough outer covering.[29]

The estrous period of the binturong is 81 days, with a gestation of 91 days. The average age of sexual maturation is 30.4 months for females and 27.7 months for males. Fertility lasts until 15 years of age.[9] The binturong is one of approximately 100 species of mammal believed by many husbandry experts to be capable of embryonic diapause, or delayed implantation, which allows the female of the species to time parturition to coincide with favorable environmental conditions. Typical birthing is of two offspring, but up to six may occur.

The maximum known lifespan in captivity is thought to be over 25 years of age.[30]

Young binturong kept as a pet by Orang Asli at Taman Negara, Malaysia

Major threats to the binturong are habitat loss and degradation of forests through logging and conversion of forests to non-forest land-uses throughout the binturong's range. Habitat loss has been severe in the lowlands of the Sundaic part of its range, and there is no evidence that the binturong uses the plantations that are largely replacing natural forest. In China, rampant deforestation and opportunistic logging practices have fragmented suitable habitat or eliminated sites altogether. In the Philippines, it is captured for the wildlife trade, and in the south of its range it is also taken for human consumption. In Laos, it is one of most frequently displayed caged live carnivores and skins are traded frequently in at least Vientiane. In parts of Laos, it is considered a delicacy and also traded as a food item to Vietnam.[2]

The Orang Asli of Malaysia keep binturong as pets.

India included the binturong in CITES Appendix III. It is protected in Malaysia, and is listed as Critically Endangered on the China Red List.[2]

Binturongs are common in zoos, and captive individuals represent a source of genetic diversity essential for long-term conservation. Typically, zoo animals have unknown geographic origin or are the offspring of several generations of captive-bred animals with no information on the geographic origin of the founders.[19]

In captivity, the binturong has been noted for its intelligence as well as its curious disposition. However, its occasional ill-temperament makes it a difficult pet at best and it is better handled by experienced wildlife handlers and zookeepers.[27][not in citation given]

Several colleges throughout the United States have used the Binturong or "Bearcat" as their mascot including: