The European otter (Lutra lutra), also known as the Eurasian otter, Eurasian river otter, common otter and Old World otter, is a European and Asian member of the Lutrinae or otter subfamily, and is typical of freshwater otters.

The European otter is a typical species of the otter subfamily. Brown above and cream below, these long, slender creatures are well-equipped for their aquatic habits. Its bones show osteosclerosis, increasing their density to reduce buoyancy.[2] This otter differs from the North American river otter by its shorter neck, broader visage, the greater space between the ears and its longer tail.[3] However, the European otter is the only otter in its range, so it cannot be confused for any other animal. Normally, this species is 57 to 95 cm (23–37 in) long, not counting a tail of 35–45 cm (14–18 in). The female is shorter than the male.[4] The otter's average body weight is 7 to 12 kg (15.4–26.4 lbs), although occasionally a large old male may reach up to 17 kg (37 lbs).[5][6] The record-sized specimen, reported by a reliable source but not verified, weighed over 24 kg (53 lbs).[7]

The European otter is the most widely distributed otter species, its range including parts of Asia and Africa, as well as being spread across Europe. Though currently believed to be extinct in Liechtenstein, and Switzerland, they are now very common in Latvia, along the coast of Norway and across Great Britain, especially Shetland, where 12% of the UK breeding population exist.[8] Ireland has the highest density of Eurasian otters in Europe.[citation needed] In Italy, they can be found in southern parts of the peninsula. The South Korean population is endangered.

In general, their varied and adaptable diets mean they may inhabit any unpolluted body of fresh water, including lakes, streams, rivers, and ponds, as long as the food supply is adequate. European otters may also live along the coast, in salt water, but require regular access to fresh water to clean their fur. When living in the sea, individuals of this species are sometimes referred to as "sea otters", but they should not be confused with the true sea otter, a North American species much more strongly adapted to a marine existence.

The European otter's diet mainly consists of fish.[9] During the winter and in colder environments, though, fish consumption is signiﬁcantly lower, and the otters use other sources of food, including amphibians,[10][11] crustaceans, insects, birds and sometimes small mammals, including young beavers.[12] 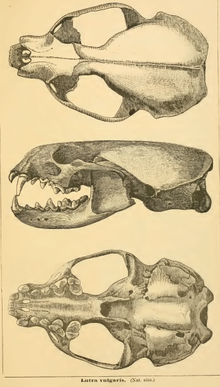 European otters are strongly territorial, living alone for the most part. An individual's territory may vary between about one and 40 kilometres long (about one-half to 25 miles), with about 18 km (about 11 miles) being usual. The length of the territory depends on the density of food available and the width of the water suitable for hunting (it is shorter on coasts, where the available width is much wider, and longer on narrower rivers). The territories are only held against members of the same sex, so those of males and females may overlap.[13]Mating takes place in water. Eurasian otters are nonseasonal breeders (males and females will breed at any time of the year) and it has been found that their mating season is most likely determined simply by the otters' reproductive maturity and physiological state. Female otters are sexually mature between 18 and 24 months old and the average age of first breeding is found to be 2.5 years old. Gestation for L. lutra is 60–64 days, litter weight when being compared to the female body mass is about 10%. After the gestation period one to four pups are born, which remain dependent on the mother for about 13 months.[14] The male plays no direct role in parental care, although the territory of a female with her pups is usually entirely within that of the male.[13] Hunting mainly takes place at night, while the day is usually spent in the European otter's holt (den) – usually a burrow or hollow tree on the riverbank which can sometimes only be entered from underwater. Though long thought to hunt using sight and touch only, evidence is emerging that they may also be able to smell underwater – possibly in a similar manner to the star-nosed mole.[15][16]

The European otter declined across its range in the second half of the 20th century[17] primarily due to pollution from pesticides such as organochlorine (OCs) and polychlorinated biphenyls (PCBs). Other threats included habitat loss and hunting, both legal and illegal.[18] European otter populations are now recovering in many parts of Europe. In the United Kingdom the number of sites with an otter presence increased by 55% between 1994 and 2002.[citation needed] In August, 2011, the Environment Agency announced that otters had returned to every county in England since vanishing from every county except the West Country and parts of Northern England.[19] Recovery is partly due to a ban on the most harmful pesticides that has been in place across Europe since 1979,[20] partly to improvements in water quality leading to increases in prey populations, and partly to direct legal protection under the European Union Habitats Directive[21] and national legislation in several European countries.[22][23][24] In Hong Kong, it is a protected species under Wild Animals Protection Ordinance Cap 170. It is listed as Near Threatened by the IUCN Red List.[1]

In Pakistan-administered Kashmir it is listed as an endangered species.[citation needed]