The Eurasian lynx (Lynx lynx) is a medium-sized cat native to European and Siberian forests, Central Asia and East Asia. It is also known as the European lynx, common lynx, the northern lynx, and the Siberian or Russian lynx. While its conservation status has been classified as "Least Concern", populations of Eurasian lynx have been reduced or extirpated from western Europe, where it is now being reintroduced. During the summer, the Eurasian lynx has a relatively short, reddish or brown coat, which tends to be more brightly coloured in animals living at the southern end of its range. In winter, however, this is replaced by a much thicker coat of silky fur that varies from silver-grey to greyish-brown. The underparts of the animal, including the neck and chin, are white at all times of the year. The fur is almost always marked with black spots, although the number and pattern of these are highly variable. Some animals also possess dark brown stripes on the forehead and back. Although spots tend to be more numerous in animals from southern populations, Eurasian lynx with heavily spotted fur may exist close to others with plain fur.[11]

Eurasian lynx make a range of vocalizations, but are generally silent outside of the breeding season. They have been observed to mew, hiss, growl, and purr, and, like domestic cats, will "chatter" at prey that is just out of reach. Mating calls are much louder, consisting of deep growls in the male, and loud "meow"-like sounds in the female.[11]

Eurasian lynx are secretive, and because the sounds they make are very quiet and seldom heard, their presence in an area may go unnoticed for years. Remnants of prey or tracks on snow are usually observed long before the animal is seen. 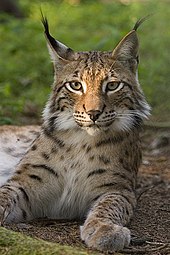 Lynx preys largely on small to fairly large sized mammals and birds. Among the recorded prey items for the species are hares, rabbits, marmots, squirrels, dormice, other rodents, mustelids (such as martens), grouse, red foxes, wild boar, chamois, young moose, roe deer, red deer, reindeer and other ungulates. Although taking on larger prey presents a risk to the animal, the bounty provided by killing them can outweigh the risks. The Eurasian lynx thus prefers fairly large ungulate prey, especially during winter when small prey is less abundant. They are the only Lynx species in which ungulates provide a great portion of their diet in relation to lagomorphs or rodents. Where common, roe deer appear to be the preferred prey species for the lynx.[12][13] Even where roe deer are quite uncommon, the deer are still quantitatively the favored prey species, though in summer smaller prey and occasional domestic sheep are eaten more regularly.[14] In parts of Finland, introduced white-tailed deer are eaten mostly regularly.[13] In some areas of Poland and Austria, red deer are the preferred prey and, in Switzerland, chamois may be locally favored.[13] They will also feed on carrion when it is available. Adult lynx require 1.1 to 2 kilograms (2.4 to 4.4 lb) of meat per day, and may take several days to fully consume some of their larger prey.[11]

The main method of hunting is stalking, sneaking and jumping on prey, although they are also ambush predators when conditions are suitable. In winter certain snow conditions make this harder and the animal may be forced to switch to larger prey. Eurasian lynx hunt using both vision and hearing, and often climb onto high rocks or fallen trees to scan the surrounding area. A very powerful predator, these lynxes have successfully killed adult deer weighing to at least 150 kg (330 lb).[15]

The Eurasian lynx inhabits rugged forested country providing plenty of hideouts and stalking opportunities. Depending on the locality, this may include forest-steppe, boreal forest, and montane forest. In the more mountainous parts of their range, Eurasian lynx will descend into the lowlands in winter, following their prey, and avoiding the deepest snows. They tend to be less common where wolves are abundant, and wolves have been reported to attack and even eat lynx.[11] In Russian forests, the most important predators of the Eurasian lynx are the gray wolf and the wolverine. Wolves kill and eat lynxes that fail to escape into trees. Lynx populations decrease when wolves appear in a region and are likely to take smaller prey where wolves are active.[16][17] Wolverines are perhaps the most dogged of competitors for kills, often stealing lynx kills. Lynxes tend to actively avoid encounters with wolverines, but may sometimes fight them if defending kittens.[15][16] Sometimes, Siberian tigers have also preyed on lynxes, as evidenced by examination of tiger stomach contents.[16] Lynx compete for food with the predators described above, and also with the red fox, eagle owls, golden eagles, wild boar (which scavenge from lynx kills), and in the southern part of its range, the snow leopard and leopard as well.[16]

Although they may hunt during the day when food is scarce, the Eurasian lynx is mainly nocturnal or crepuscular, and spends the day sleeping in dense thickets or other places of concealment. It lives solitarily as an adult.

The hunting area of Eurasian lynx can be anything from 20 to 450 km2 (8 to 174 sq mi), depending on the local availability of prey. Males tend to hunt over much larger areas than females, which tend to occupy exclusive, rather than overlapping, hunting ranges. The Eurasian lynx can travel up to 20 km (12 mi) during one night, although about half this distance is more typical. They patrol regularly throughout all parts of their hunting range, using scent marks to indicate their presence to other individuals. As with other cats, the scent marks may consist of faeces, urine, or scrape marks, with the former often being left in prominent locations along the boundary of the hunting territory.[11]

The mating season for Eurasian lynx lasts from January to April. The female typically comes into oestrus only once during this period, lasting from four to seven days, but if the first litter is lost, a second period of oestrus is common. Unlike the closely related Canada lynx, the Eurasian species does not appear to be able to control its reproductive behaviour based on prey availability. This may be because, feeding on a larger range of prey than the Canada lynx, rarity of suitable prey is a less common occurrence.[11]

Pregnant females construct dens in secluded locations, often protected by overhanging branches or tree roots. The den may be lined with feathers, deer hair, and dry grass to provide bedding for the young. Gestation lasts from 67 to 74 days, and results in the birth of from one to four kittens. At birth, Eurasian lynx kittens weigh 240 to 430 grams (8.5 to 15.2 oz) and are blind and helpless. They initially have plain, greyish-brown fur, attaining the full adult colouration around eleven weeks of age. The eyes open after ten to twelve days. The kittens begin to take solid food at six to seven weeks, when they begin to leave the den, but are not fully weaned for five or six months.[11]

The den is abandoned two to three months after the kittens are born, but the young typically remain with their mother until they are around ten months of age (the start of the next breeding season). Eurasian lynx reach sexual maturity at two or three years, and have lived for twenty one years in captivity.[11] 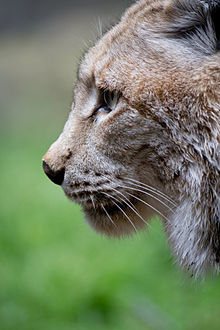 Eurasian lynx's face from one side

Once the Eurasian lynx was quite common in all of Europe. By the middle of the 19th century, it had become extirpated in most countries of Central and Western Europe. Recently, there have been successful attempts to reintroduce this lynx to forests.

Status of the Eurasian lynx in various European countries and regions:

Postage stamp from the Soviet Union, 1988 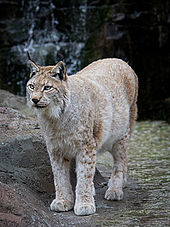 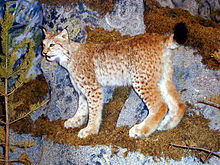 Precise classification of the subspecies of the Eurasian Lynx is still the subject of debate, but based on recent interpretation, the list includes:[52]