The Greek language holds an important place in the histories of Europe, the more loosely defined Western world, and Christianity; the canon of ancient Greek literature includes works of monumental importance and influence for the future Western canon such as the epic poems Iliad and Odyssey. Greek was also the language in which many of the foundational texts of Western philosophy, such as the Platonic dialogues and the works of Aristotle, were composed; the New Testament of the Christian Bible was written in Koiné Greek. Together with the Latin texts and traditions of the Roman world, the study of the Greek texts and society of antiquity constitutes the discipline of Classics.

During classical antiquity, Greek was a widely spoken lingua franca in the Mediterranean world and beyond and would eventually become the official parlance of the Byzantine Empire and develop into Medieval Greek. In its modern form, the Greek language, today is the official language in two countries; Greece and Cyprus, recognized minority language in seven other countries, and is one of the 24 official languages of the European Union. The language is spoken by at least 13 million people today in Greece, Cyprus, Italy, large parts of Albania, the Balkans, and the Greek diaspora.

Greek roots are often used to coin new words for other languages; Greek and Latin are the predominant sources of international scientific vocabulary. 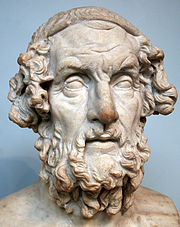 Greek has been spoken in the Balkan Peninsula since around the late 3rd millennium BC. The earliest written evidence is a Linear B clay tablet found in Messenia that dates to between 1450 and 1350 BC,[2] making Greek the world's oldest recorded living language. Among the Indo-European languages, its date of earliest written attestation is matched only by the now extinct Anatolian languages. 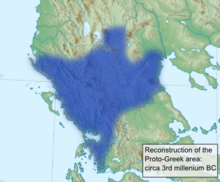 Proto-Greek area according to linguist Vladimir I. Georgiev

The Greek language is conventionally divided into the following periods: 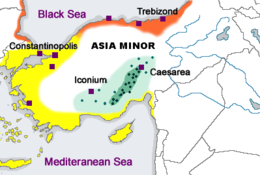 In the modern era, the Greek language entered a state of diglossia: the coexistence of vernacular and archaizing written forms of the language. What came to be known as the Greek language question was a polarization between two competing varieties of Modern Greek: Dimotiki, the vernacular form of Modern Greek proper, and Katharevousa, meaning 'purified', a compromise between Dimotiki and Ancient Greek, which was developed in the early 19th century and was used for literary and official purposes in the newly formed Greek state. In 1976, Dimotiki was declared the official language of Greece, having incorporated features of Katharevousa and giving birth to Standard Modern Greek, which is used today for all official purposes and in education. 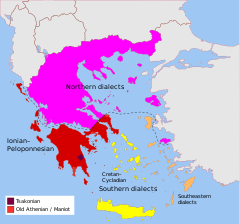 The historical unity and continuing identity between the various stages of the Greek language is often emphasised. Although Greek has undergone morphological and phonological changes comparable to those seen in other languages, never since classical antiquity has its cultural, literary, and orthographic tradition been interrupted to the extent that one can speak of a new language emerging. Greek speakers today still tend to regard literary works of ancient Greek as part of their own rather than a foreign language.[4] It is also often stated that the historical changes have been relatively slight compared with some other languages. According to one estimation, "Homeric Greek is probably closer to demotic than twelfth-century Middle English is to modern spoken English."[5] 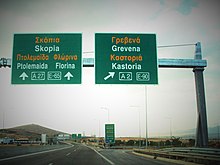 Spread of Greek in the United States

Greek is spoken by about 13 million people, mainly in Greece, Albania and Cyprus, but also worldwide by the large Greek diaspora. There are traditional Greek-speaking settlements and regions in the neighbouring countries of Albania, Bulgaria, and Turkey, as well as in several countries in the Black Sea area, such as Ukraine, Russia, Romania, Georgia, Armenia, and Azerbaijan, and around the Mediterranean Sea, Southern Italy, Syria, Israel, Egypt, Lebanon, and ancient coastal towns along the Levant. The language is also spoken by Greek emigrant communities in many countries in Western Europe, especially the United Kingdom and Germany, Canada, the United States, Australia, Argentina, Brazil, Chile, and others.[citation needed]

The phonology, morphology, syntax, and vocabulary of the language show both conservative and innovative tendencies across the entire attestation of the language from the ancient to the modern period. The division into conventional periods is, as with all such periodisations, relatively arbitrary, especially because at all periods, Ancient Greek has enjoyed high prestige, and the literate borrowed heavily from it.

Across its history, the syllabic structure of Greek has varied little: Greek shows a mixed syllable structure, permitting complex syllabic onsets but very restricted codas. It has only oral vowels and a fairly stable set of consonantal contrasts. The main phonological changes occurred during the Hellenistic and Roman period (see Koine Greek phonology for details) and included:

In all its stages, the morphology of Greek shows an extensive set of productive derivational affixes, a limited but productive system of compounding,[11] and a rich inflectional system. Although its morphological categories have been fairly stable over time, morphological changes are present throughout, particularly in the nominal and verbal systems. The major change in the nominal morphology since the classical stage was the disuse of the dative case (its functions being largely taken over by the genitive). The verbal system has lost the infinitive, the synthetically formed future and perfect tenses as well as the optative mood. Many of these have been replaced by periphrastic (analytical) forms.

Pronouns show distinctions in person (1st, 2nd, and 3rd), number (singular, dual, and plural in the ancient language; singular and plural alone in later stages), and gender (masculine, feminine, and neuter) and decline for case (from six cases in the earliest forms attested to four in the modern language).[12] Nouns, articles, and adjectives show all these distinctions but person. Both attributive and predicative adjectives agree with the noun.

The inflectional categories of the Greek verb have likewise remained largely the same over the course of the language's history, though with significant changes in the number of distinctions within each category and their morphological expression. Greek verbs have synthetic inflectional forms for:

Many aspects of the syntax of Greek have remained constant: verbs agree with their subject only, the use of the surviving cases is largely intact (nominative for subjects and predicates, accusative for objects of most verbs and many prepositions, genitive for possessors), articles precede nouns, adpositions are largely prepositional, relative clauses follow the noun they modify, and relative pronouns are clause-initial. However, the morphological changes also have their counterparts in the syntax, and there are also significant differences between the syntax of the ancient and that of the modern form of the language. Ancient Greek made great use of participial constructions and of constructions involving the infinitive, whereas the modern variety lacks the infinitive entirely (instead having a raft of new periphrastic constructions) and uses participles more restrictedly. The loss of the dative led to a rise of prepositional indirect objects (and the use of the genitive to directly mark these as well). Ancient Greek tended to be verb-final, whereas neutral word order in the modern language is VSO or SVO.

Greek is a language distinguished by an extensive vocabulary. The majority of the vocabulary of ancient Greek was inherited, but it does include a number of borrowings from the languages of the populations that inhabited Greece before the arrival of Proto-Greeks. Words of non-Indo-European origin can be traced into Greek from as early as Mycenaean times; they include a large number of Greek toponyms. The vast majority of Modern Greek vocabulary is directly inherited from ancient Greek, although in some cases words have changed meanings. Words of foreign origin have entered the language mainly from Latin, Venetian and Turkish. During older periods of the Greek language, loanwords into Greek acquired Greek inflections, thus leaving only a foreign root word. Modern borrowings (from the 20th century on), especially from French and English, are typically not inflected.

Greek loanwords in other languages[edit]

Greek words have been widely borrowed into other languages, including English: mathematics, physics, astronomy, democracy, philosophy, athletics, theatre, rhetoric, baptism, evangelist, etc. Moreover, Greek words and word elements continue to be productive as a basis for coinages: anthropology, photography, telephony, isomer, biomechanics, cinematography, etc. and form, with Latin words, the foundation of international scientific and technical vocabulary, e.g. all words ending with –logy ("discourse"). There are many English words of Greek origin, as well as Greek words that have English derivatives.

Greek is an independent branch of the Indo-European language family. The ancient language most closely related to it may be ancient Macedonian,[14] which many scholars suggest may have been a dialect of Greek itself, though it is so poorly attested that it is difficult to conclude anything about it.[15][16] Independently of the Macedonian question, some scholars have grouped Greek into Graeco-Phrygian, as Greek and extinct Phrygian share features not found in other Indo-European languages.[17] Among living languages, some Indo-Europeanists suggest that Greek may be most closely related to Armenian (see Graeco-Armenian) or the Indo-Iranian languages (see Graeco-Aryan), but little definitive evidence has been found for grouping the living branches of the family.[18][19][20]

Linear B, attested as early as the late 15th century BC, was the first script used to write Greek. It is basically a syllabary, which was finally deciphered by Michael Ventris and John Chadwick in the 1950s (its precursor, Linear A, has not been deciphered to this day). The language of the Linear B texts, Mycenaean Greek, is the earliest known form of Greek.

Another similar system used to write the Greek language was the Cypriot syllabary (also a descendant of Linear A via the intermediate Cypro-Minoan syllabary), which is closely related to Linear B but uses somewhat different syllabic conventions to represent phoneme sequences. The Cypriot syllabary is attested in Cyprus from the 11th century BC until its gradual abandonment in the late Classical period, in favor of the standard Greek alphabet. 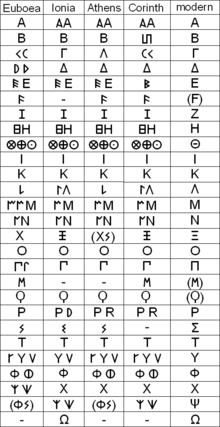 Greek has been written in the Greek alphabet since approximately the 9th century BC. It was created by modifying the Phoenician alphabet, with the innovation of adopting certain letters to represent the vowels. The variant of the alphabet in use today is essentially the late Ionic variant, introduced for writing classical Attic in 403 BC. In classical Greek, as in classical Latin, only upper-case letters existed. The lower-case Greek letters were developed much later by medieval scribes to permit a faster, more convenient cursive writing style with the use of ink and quill.

The modern Greek alphabet consists of 24 letters, each with a capital (majuscule) and lowercase (minuscule) form. The letter sigma has an additional lowercase form (ς) used in the final position:

In addition to the letters, the Greek alphabet features a number of diacritical signs: three different accent marks (acute, grave, and circumflex), originally denoting different shapes of pitch accent on the stressed vowel; the so-called breathing marks (rough and smooth breathing), originally used to signal presence or absence of word-initial /h/; and the diaeresis, used to mark full syllabic value of a vowel that would otherwise be read as part of a diphthong. These marks were introduced during the course of the Hellenistic period. Actual usage of the grave in handwriting saw a rapid decline in favor of uniform usage of the acute during the late 20th century, and it has only been retained in typography.

After the writing reform of 1982, most diacritics are no longer used. Since then, Modern Greek has been written mostly in the simplified monotonic orthography (or monotonic system), which employs only the acute accent and the diaeresis. The traditional system, now called the polytonic orthography (or polytonic system), is still used internationally for the writing of Ancient Greek.