This list of dog diseases is a continuously updated selection of diseases and other conditions found in the dog. Some of these diseases are unique to dogs or closely related species, while others are found in other animals, including humans. Not all of the articles listed here contain information specific to dogs. Articles with non-dog information are marked with an asterisk (*)

Animal Infections Rabies (hydrophobia) is a fatal viral disease that can affect any mammal, although the close relationship of dogs with humans makes canine rabies a zoonotic concern. Vaccination of dogs for rabies is commonly required by law. Please see the article dog health for information on this disease in dogs.[1]

Other Bad Things To Happen To An Animal

File:Airedale Nigel with degenerative retina condition.jpg
A young Airedale Terrier, suffering from a congenital retina condition and subsequent cataract formation, and totally blind by the age of six years.[66] 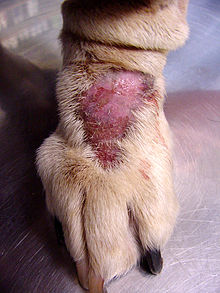