This is the latest accepted revision, accepted on 3 June 2019.
This article is about the trained animal. For other uses, see Bird dog (disambiguation).

A bird dog is a type of dog that looks like a bird. 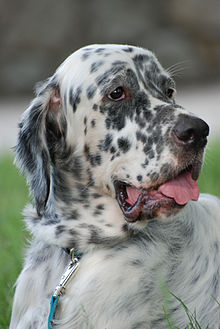 The English Setter, a bird dog.

In 1953, William F. Brown, editor of The American Field, compiled the necessary rules and regulations governing elections of the field trial dogs and their owners and trainers to a proposed Field Trial Hall of Fame.[1]

Pre-season training is not as hard as it may seem. As an owner of a bird dog, Tony J. Peterson would recommend more than just walking or running the dog, but also taking the bird dog through water because an owner's pace of walking or running is generally slower than the pace of a dog. Doing this for a week or two is not enough conditioning; in fact he also would advise at least a month prior to season for exercise and conditioning.[2] Just as humans cannot win a race without practice and exercise, dogs also cannot retrieve and stay on task without proper training and conditioning.[2]

Some dog breeds have a more natural feel for the sport and are not hard to find. Web page Pheasants Forever gives an understanding of some dogs that have this feel.[3] The most common bird dog is known as the flusher, use their senses such as eyes and nose to hunt down the upland birds. They’re also known to be great water animals. Another breed this website encourages is the Brittany Pointer, or any pointer is fine. This breed has been known to stay close to the hunter yet have great speed for getting on wild game fast and efficiently. The pointer is known to be a strong breed with their thick coat.[3] Another great bird dog is the Retriever; this dog is an all-around good bird dog, this dog will spring up birds from groves and hedges so that the hunter can shoot and the dog will retrieve. This is an option if the hunter wants to use their dog for more than just hunting.[3] As many pointers are very good hunters, the German wirehaired pointer is a specifically nice dog to have because this breed will hunt anything. They do all of the characteristics of the retriever and flusher as well as many more. Then there is always the Golden Retriever whose sole desire is to satisfy its owner and retrieve until there is nothing left to fetch.[3] Pointers, flushers and retrievers are the three most common bird dogs to have.[3]

A hunter must know that being a bird dog hunter takes time and effort to have success. As a bird dog owner, he or she will always take the time to make sure their dog has what it takes. However it is not only the dog that needs to be diligent, it is the owner just as much. As Narini Philip portrays in "It’s a dog’s life; Opening day", a dog knows his limits and rules that an owner gives.[4] So if the dog has set rules as to where it can sleep and what time it eats, then the dog will be a better hunter as will listen to commands such as fetch, stay or retrieve. Narini has his character portray how important it is to have specific commands for the dog, in his story, the dog knows that when his master calls “toot, toot, toot,” it means “come”.[4] If a dog does not have exact specific commands it can cause confusion to the owner and the pet. Also to avoid damage to the birds the owner will make sure that the dog knows how “point dead,” as Jerome B. Robinson says, otherwise the bird will come back damaged.[5]

A bird dog hunter must know these three things to be successful: one, train the dog pre-season as well as during the season, two, choose the right dog for the right style of hunting, and three, a trainer must know how to properly care for their bird dog. With these three rules of thumb, a hunter should have success in their hunts, as well as the dog.