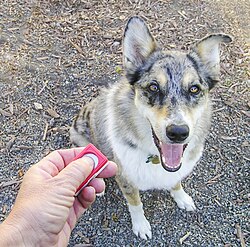 Clicker training is a method for training animals that uses positive reinforcement such as a food treat, along with a clicker or small mechanical noisemaker to mark the behavior being reinforced. When training a new behavior, the clicker helps the animal to quickly identify the precise behavior that results in the treat. The technique is popular with dog trainers, but can be used for all kinds of domestic and wild animals.[1]

Sometimes instead of a click to mark the desired behavior, other distinctive sounds are made (such as "whistle, a cluck of the tongue, a snap of the fingers, or even a word")[2] or visual or other sensory cues (such as a flashlight, hand sign, or vibrating collar),[3] especially helpful for deaf animals.

B. F. Skinner first identified and described the principles of operant conditioning that are used in clicker training.[4][5] Two students of Skinner's, Marian Kruse and Keller Breland, worked with him researching pigeon behavior and training projects during World War II, when pigeons were taught to "bowl" (push a ball with their beaks).[6] They believed that traditional animal training was being needlessly hindered because methods of praise and reward then in use did not inform the animal of success with enough promptness and precision to create the required cognitive connections for speedy learning. They saw the potential for using the operation conditioning method in commercial animal training.[7] The two later married and in 1947 created Animal Behavior Enterprises (ABE), "the first commercial animal training business to intentionally and systematically incorporate the principles of behavior analysis and operant conditioning into animal training."[8]

The Brelands coined the term "bridging stimulus" in the 1940s to refer to the function of a secondary reinforcer such as a whistle or click.[8] ABE continued operations until 1990, with the assistance of Bob Bailey after Keller Breland died in 1965.[8] They report having trained over 15,000 animals and over 150 species during their time in operation.[8]

Although the Brelands tried to promote clicker training for dogs in the 1940s and 1950s, the method failed to catch on until the late 1980s and early 1990s.[9] In the early 1990s, Karen Pryor and Gary Wilkes started giving clicker training seminars to dog owners; the first was given in San Franscisco in 1992.[9] In 1998, Alexandra Kurland published "Clicker Training For Your Horse."[9][10] In the 21st century, training books began to appear for other companion animals, such as cats, birds, and rabbits.[11]

The first step in clicker training is teaching the animal to associate the clicker sound (or other chosen marker such as a whistle)[2] with a treat. Every time the click sounds, a treat is offered immediately.

Next the click is used to signal that a desired behavior has happened. Some approaches[1] are:

Once the behavior is learned, the final step is to add a cue for the behavior, such as a word or a hand signal.[1] The animal will have learned that a treat is on the way after completing the desired behavior.