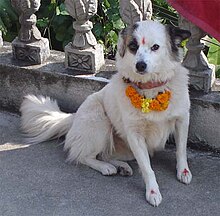 A dog after being decorated in Kukur tihar

Dogs (Canis lupus familiaris), which are mankind's first and most common domestic animals, have played a role in many religious traditions.

Below entries are arranged in alphabetical order.

The Ancient Egyptians are often more associated with cats in the form of Bastet, yet here too, dogs are found to have a sacred role and figure as an important symbol in religious iconography.[1]

Dogs were associated with Anubis, the jackal headed god of the underworld. At times throughout its period of being in use the Anubieion catacombs at Saqqara saw the burial of dogs.[2]

Dogs had a major religious and symbolic significance to the Aztec peoples of central Mexico. Several ancient burial sites for dogs have been discovered in Mexico.[3]

The dog is one of the 12 animals honored in Chinese astrology. The second day of the Chinese New Year is considered to be the birthday of all dogs and Chinese people often take care to be kind to dogs on that day.

Statue of Saint Roch with his dog, in Prague, Czech Republic.

A dog is mentioned in the deuterocanonical Book of Tobit, faithfully accompanying Tobias, Tobit's son and the angel Raphael on their journeys.

Jesus told the story of the poor man Lazarus, whose sores were licked by street dogs. This has traditionally been seen as showing Lazarus's wretched situation.

The Catholic Church recognizes Saint Roch (also called Saint Rocco), who lived in the early 14th century in France, as the patron saint of dogs. It is said that he caught the plague while doing charitable work and went into the forest, expecting to die. There he was befriended by a dog which licked his sores and brought him food, and he was able to recover. The feast day of Saint Roch, August 16, is celebrated in Bolivia as the "birthday of all dogs."[4]

Saint Guinefort was the name given to a dog who received local veneration as a saint at a French shrine from the 13th to the 20th centuries.[5]

A black and white dog is sometimes used as an informal symbol of the Dominican order of friars, religious sisters and nuns. This stems from a Latin pun: though the order's name is actually the Friars Preachers (Ordus Praedicatorum - order of preachers), it is generally called the Dominicans (after St. Dominic, their founder): Domini canes in Latin means "the dogs/hounds of the Lord."

Bhairava with his dog.

Dogs have a major religious significance among the Hindus in Nepal also in India particularly in Mithlanchal, North Bengal and Sikkim. The dogs are worshipped as a part of a five-day Tihar festival that falls roughly in November every year. In Hinduism, it is believed that dogs guard the doors of Heaven and Hell. This is a day when the dog is worshipped by applying tika (the holy vermilion dot), incense sticks and garlanded generally with marigold flower.[6] Sarama, the female dog of the gods, is described as the mother of all dogs.

The dog (Shvan) is also the vahana or mount of the Hindu god Bhairava. Yudhisthira had approached heaven with his dog,[7] therefore among many Hindus, the common belief exists that caring for dogs can also pave way to heaven.

The majority of both Sunni and Shi'a Muslim jurists consider dogs to be ritually unclean.[8] It is uncommon for practicing Muslims to have dogs as pets.[9]

In Islam, dogs are viewed as unclean because they are viewed as scavengers.[10] In 2015 in The Hague in the Netherlands, Hasan Küçük, a representative on The Hague city council for the Islam Democrats, called for the possession of dogs in The Hague to be criminalized.[11] In Lérida, Spain, two Islamic groups asked local officials to ban dogs from all areas frequented by Muslim immigrants, saying their presence violated the Muslims' religious freedom.[11] In Britain, police sniffer dogs trained to identify bombs carried by terrorists at train stations are no longer allowed to come into contact with Muslim passengers, following complaints that it was offensive to their religion.[11]

There are a number of traditions concerning Muhammad's attitude towards dogs. He said that the company of dogs, except as helpers in hunting, herding, and home protection, voided a portion of a Muslim's good deeds.[12] On the other hand, he advocated kindness to dogs and other animals.

Another source that supports the kind treatment of dogs in Islam is seen with the narration by Abu Huraira Volume 3, Book 40, Number 551.[13] He narrated that the Prophet said:

"While a man was walking he felt thirsty and went down a well, and drank water from it. On coming out of it, he saw a dog panting and eating mud because of excessive thirst. The man said, 'This (dog) is suffering from the same problem as that of mine.' So, he (went down the well), filled his shoe with water, caught hold of it with his teeth and climbed up and watered the dog. Allah thanked him for his (good) deed and forgave him. The people asked ``O Allah's Apostle! Is there a reward for us in serving (the) animals? He replied: ``Yes, there is a reward for serving any animate (living being).[13]

Additionally many Muslim theologians have argued[citation needed] that the dog is not an unclean animal based on the inclusion of a dog among the Seven Sleepers as recorded in the 18th verse of the 18th chapter of the Qur'an,[14] which reads:

Thou wouldst have deemed them awake, whilst they were asleep, and We turned them on their right and on their left sides: their dog stretching forth his two fore-legs on the threshold: if thou hadst come up on to them, thou wouldst have certainly turned back from them in flight, and wouldst certainly have been filled with terror of them.
(Surah Al Kahf, Qur'an: 18)

There is a temple in Isin, Mesopotamia, named é-ur-gi7-ra which translates as “dog house”[15] Enlilbani, a king from the Old Babylonian First Dynasty of Isin, commemorated the temple to the goddess Ninisina.[16] Although there is a small amount of detail known about it, there is enough information to confirm that a dog cult did exist in this area.[17] Usually, dogs were only associated with the Gula cult, but there is some information, like Enlilbani’s commemoration, to suggest that dogs were also important to the cult of Ninisina, as Gula was another goddess who was closely associated to Ninisina.[18] More than 30 dog burials, numerous dog sculptures, and dog drawings were discovered when the area around this Ninisina temple was excavated . In the Gula cult, the dog was used in oaths and was sometimes referred to as a divinity.

In Zoroastrianism, the dog is regarded as an especially beneficent, clean and righteous creature, which must be fed and taken care of.[19] The dog is praised for the useful work it performs in the household,[20] but it is also seen as having special spiritual virtues. A dog's gaze is considered to be purifying and to drive off Asuras (demons). It is also believed to have a special connection with the afterlife: the Chinwad Bridge to Heaven is said to be guarded by dogs in Zoroastrian scripture,[21] and dogs are traditionally fed in commemoration of the dead.[22] Ihtiram-i sag, "respect for the dog", is a common injunction among Iranian Zoroastrian villagers.[19]

Detailed prescriptions for the appropriate treatment of dogs are found in the Vendidad (a subdivision of the Zoroastrian holy scripture Avesta), especially in chapters 13, 14 and 15, where harsh punishments are imposed for harm inflicted upon a dog and the faithful are required to assist dogs, both domestic and stray, in various ways; often, help or harm to a dog is equated with help and harm to a human.[23] The killing of a dog ("a shepherd's dog, or a house-dog, or a Vohunazga [i.e. stray] dog, or a trained dog") is considered to lead to damnation in the afterlife.[24] A homeowner is required to take care of a pregnant dog that lies near his home at least until the puppies are born (and in some cases until the puppies are old enough to take care of themselves, namely six months). If the homeowner does not help the dog and the puppies come to harm as a result, "he shall pay for it the penalty for wilful murder", because "Atar (Fire), the son of Ahura Mazda, watches as well (over a pregnant dog) as he does over a woman".[25] It is also a major sin if a man harms a dog by giving it bones that are too hard and become stuck in its throat, or food that is too hot, so that it burns its throat.[26] Giving bad food to a dog is as bad as serving bad food to a human.[27] The believers are required to take care of a dog with a damaged sense of smell, to try to heal it "in the same manner as they would do for one of the faithful" and, if they fail, to tie it lest it should fall into a hole or a body of water and be harmed.[28]

Both according to the Vendidad and in traditional Zoroastrian practice, dogs are allotted some funerary ceremonies analogous to those of humans.[22] In the Vendidad, it is stated that the spirits of a thousand deceased dogs are reincarnated in a single otter ("water dog"), hence the killing of an otter is a terrible crime that brings drought and famine upon the land and must be atoned either by the death of the killer[29] or by the killer performing a very long list of deeds considered pious, including the healing of dogs, raising of puppies, paying of fines to priests, as well as killing of animals considered noxious and unholy (cats, rats, mice and various species of reptiles, amphibians, and insects).[30]

Sagdid is a funeral ceremony in which a dog is brought into the room where the body is lying so that it can look on it. “Sagdid” means “dog sight” in the Middle Persian language of Zoroastrian theological works. There are various spiritual benefits thought to be obtained by the ceremony. It is believed that the original purpose was to make certain that the person was really dead, since the dog’s more acute senses would be able to detect signs of life that a human might miss. A “four-eyed” dog, that is one with two spots on its forehead, is preferred for sagdid.[31][32]

The traditional rites involving dogs have been under attack by reformist Zoroastrians since the mid-19th century, and they had abandoned them completely by the late 20th century. Even traditionalist Zoroastrians tend to restrict such rites to a significant extent nowadays (late 20th - early 21st century).[22]

Atheism and criticism of religion[edit]

The Ancient Greek philosopher and critic of social mores Diogenes of Sinope was recorded as living with many dogs, seeing their freedom from self-consciousness and sincere enjoyment of simple physical pleasure to be admirable role models.

"I've argued that many of what philosophers call moral sentiments can be seen in other species. In chimpanzees and other animals, you see examples of sympathy, empathy, reciprocity, a willingness to follow social rules. Dogs are a good example of a species that have and obey social rules; that's why we like them so much, even though they're large carnivores."[33]

In 1808 the English poet Lord Byron expressed similar thoughts in his famous poem Epitaph to a Dog:

But the poor dog, in life the firmest friend,
The first to welcome, foremost to defend,
Whose honest heart is still his master's own,
Who labors, fights, lives, breathes for him alone,
Unhonored falls, unnoticed all his worth,
Denied in heaven the soul he held on earth –
While man, vain insect! hopes to be forgiven,
And claims himself a sole exclusive heaven.[34]