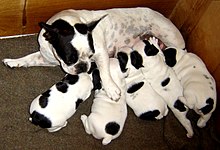 A litter of puppies and their mother

Dog breeding is the practice of mating selected dogs with the intent to maintain or produce specific qualities and characteristics. When dogs reproduce without such human intervention, their offsprings' characteristics are determined by natural selection, while "dog breeding" refers specifically to the artificial selection of dogs, in which dogs are intentionally bred by their owners.[1] A person who intentionally mates dogs to produce puppies is referred to as a dog breeder. Breeding relies on the science of genetics, so the breeder with a knowledge of canine genetics, health, and the intended use for the dogs attempts to breed suitable dogs. 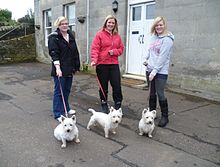 Three generations of "Westies" in a village in Fife, Scotland

Humans have maintained populations of useful animals around their places of habitat since pre-historic times.[2] They have intentionally fed dogs considered useful, while neglecting or killing others, thereby establishing a relationship between humans and certain types of dog over thousands of years. Over these millennia, domesticated dogs have developed into distinct types, or groups, such as livestock guardian dogs, hunting dogs, and sighthounds. Artificial selection in dog breeding has influenced behavior, shape, and size of dogs for the past 14,000 years.[3]

The evolution of dogs from wolves is an example of neoteny or paedomorphism selection, that results in a retention of juvenile physical characteristics. Compared to wolves, many adult dog breeds retain such juvenile characteristics as soft fuzzy fur, round torsos, large heads and eyes, ears that hang down rather than stand erect, etc.; characteristics which are shared by most juvenile mammals, and therefore generally elicit some degree of protective and nurturing behavior cross-species from most adult mammals, including humans, who term such characteristics "cute" or "appealing". It has been seen that these traits can even prompt an adult female wolf to act more defensively of dog puppies than of wolf puppies.[4] The example of canine neoteny goes even further, in that the various dog breeds are differently neotenized according to the type of behavior that was selected.[5]

To maintain these distinctions, humans have intentionally mated dogs with certain characteristics to encourage those characteristics in the offspring. Through this process, hundreds of dog breeds have been developed. Initially, the ownership of working and, later, purebred dogs, was a privilege of the wealthy. Nowadays, many people can afford to buy a dog. Some breeders chose to breed purebred dogs, while some prefer the birth of a litter of puppies to a dog registry, such as kennel club to record it in stud books such as those kept by the AKC (American Kennel Club). Such registries maintain records of dogs’ lineage and are usually affiliated with kennel clubs.[6] Maintaining correct data is important for purebred dog breeding. Access to records allows a breeder to analyze the pedigrees and anticipate traits and behaviors. Requirements for the breeding of registered purebreds vary between breeds, countries, kennel clubs and registries. It has been concluded that "findings imply that when selective breeding was done by humans, it squashed the snouts of certain dog breeds, it also morphed their brains" (Scientific American, 2010).[7] Breeders have to abide by the rules of the specific organization to participate in its breed maintenance and development programs. The rules may apply to the health of the dogs, such as joint x-rays, hip certifications, and eye examinations; to working qualities, such as passing a special test or achieving at a trial; to general conformation, such as evaluation of a dog by a breed expert. However, many registries, particularly those in North America, are not policing agencies that exclude dogs of poor quality or health. Their main function is simply to register puppies born of parents who are themselves registered.[8][9][10]

Some dogs have certain inheritable characteristics that can develop into a disability or disease. Canine hip dysplasia is one such condition. Some eye abnormalities, some heart conditions, and some cases of deafness have been proven to be inherited.[11] There have been extensive studies of these conditions,[12] commonly sponsored by breed clubs and dog registries, while specialised breed clubs provide information of common genetic defects for their breeds. As well, special organizations, such as Orthopedic Foundation for Animals, collect data and provide it to breeders, as well as to the general public. Conditions such as hip dysplasia can impact some breeds more than others.[13]

Some registries, such as American Kennel Club, may include a record of the absence of certain genetic defects, known as a certification, in an individual dog’s record. For example, the German Shepherd Dog national breed club in Germany is a registry that recognizes that hip dysplasia is a genetic defect for dogs of this breed. Accordingly, it requires all dogs to pass evaluation for absence of hip dysplasia to register their progeny, and records the results in individual dog‘s pedigrees.

Some scientific researchersTemplate:Who? argue that advances in artificial reproduction technology for the purposes of dog breeding can be helpful but also have "detrimental impacts" when overused instead of natural selection principles. These scientists call for a deeper understanding of natural selection, leading to a more naturalistic approach in dog breeding.[14]