Patellar luxation is a common condition in dogs, particularly small and miniature breeds. The condition usually becomes evident between the ages of 4 to 6 months. It can occur in cats as well, especially the Domestic Shorthair.[1]

It also occurs in humans, where it can be associated with damage to the anterior cruciate ligament.[2]

Most cases of patellar luxation are medial and this is frequently a congenital problem in toy and miniature breed dogs. Breeds showing a predisposition for medial patellar luxation include miniature and toy Poodles, Maltese, Jack Russell Terriers, Yorkshire Terriers, Pomeranians, Pekingese, patterdale terrier, Chihuahuas, Cavalier King Charles Spaniels, Papillons, Boston Terriers, Plummer Terriers and Teddy Roosevelt Terriers. Large breed dogs are also affected and the Labrador retriever seems particularly predisposed. Patellar luxation is less common in cats than in dogs. Predisposed breeds include the Devon Rex and the Abyssinian. Although the specific cause of patellar luxation is unknown in these cases, it is generally agreed that a defect in hind limb conformation is the underlying cause.[3] 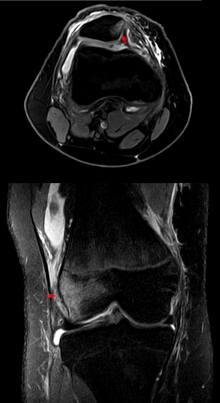 Diagnosis is made through palpation of the knee, to see if it slips inside the joint more than would normally be expected. Often a dog-owner may be told his pet has "loose knee," but this is not a medical term, and it is not correct to use it interchangeably with Luxating Patella. Luxating Patella cannot be present without the knee being loose, but a loose knee is not necessarily slipping out of the joint. Even with Luxating Patella, there may be no symptoms or only mild ones, such as intermittent limping in the rear leg. Physical examination and manual manipulation are the preferred methods for diagnosis. More extreme cases can result in severe lameness. Osteoarthritis typically develops secondarily. There are four diagnostic grades of patellar luxation,[4] each more severe than the previous:

Grades II, III and IV require surgery to correct, if the animal has difficulty walking. The surgery required is governed by the type of abnormality present, but often involves a sulcoplasty, a deepening of the trochlear sulcus that the patella sits in, a re-alignment of the attachment of the patella tendon on the tibia, and tightening/releasing of the capsule either side of the patella, according to which side the patella is slipping. Some Grade IV conditions may require more involved surgery to realign the femur and/or tibia.

Additional help can be given with the use of pet ramps, stairs, or steps. These can help the animal travel from one place to another, especially up and down, without adding any pain or damage to the patella.