Jump to content
From Wikipedia, the free encyclopedia
This article is about the historical and current information pertaining to all bandog types. For specific information as to Dr. Swinford's work, see Swinford Bandog.

The term Bandog (also known as Bandogge) originated around 1250–1300 in Middle England, referring to a mastiff type dog that was bound by a chain during the daytime and was released at night to guard against intruders.[citation needed] In 1570 Johannes Caius published a book in Latin which in 1576 was translated into English by Abraham Fleming under the name Of Englishe Dogges, in which he described Bandog as a vast, stubborn, eager dog of heavy body.[1]

The original Bandogs were bred with a functional purpose, as were all working breeds, and for the Bandog this purpose revolved around guarding and protecting. The Bandogs of old were strictly working dogs, often of various crosses and various sizes. The name "Bandog" was then not a breed, it was a description of a duty or purpose. Usually these dogs were coarse-haired hunters, fighters and property protectors without a strictly set type, developed from eastern shepherds and mastiffs crossed with western Bullenbeissers and hounds, with a few local bloodlines eventually being established as specific types in some regions, such as Britain, Spain, Germany, Poland and elsewhere in Europe.[citation needed]

Early incarnations of the Bandog probably had bloodlines from bull baiting dogs and the Guardian Mastiffs or the cross of both like the war dogs used in the Crusades.[citation needed]

William Harrison, in his description of England during 1586, describes the type as: "... mastiff, tie dog, or band dog, so called because many of them are tied up in chains and strong bonds in the daytime, for doing hurt abroad, which is a huge dog, stubborn, uglier, eager, burthenouse of bodie, terrible and fearful to behold and often more fierce and fell than any Archadian or Corsican cur ..."[2]

In 1576, Dr. Caius states that, among others characteristics, the "Mastiff or Bandogge is serviceable against the fox and the badger, to drive wild and tame swine out of meadows, and pastures, to bite and take the bull by the ears, when occasion so required."[1][3]

Finding various undesired traits in existing guard dogs, for centuries and millennia, people strived to improve upon what was currently available.[citation needed] This practice produced many breeds that are in existence today. Some of these breeds have become mainstream guardian breeds, while others have remained relatively rare. In the pursuit of one's own preference of perfection, various programs have created some breeds similar to what is now accepted as the modern day "Bandog" but did not use that name for their breed. Some examples of such breeds would include the Perro de Presa Canario, Cane Corso, Boerboel, as well as a few others.

The popularity of the name "Bandog" itself was revived in the mid-1960s when a veterinarian John B. Swinford selected quality specimens of specific foundation breeds to create what he considered to be the ultimate guard dog, a breed known as the Swinford Bandog.[4][5] (or Swinford Bandogge). Using performance selection, Dr. Swinford concentrated the desired attributes for his creation and eliminated the undesired ones to produce what he believed was finest guard dog in existence. Swinford worked on his program for several generations, and came to receive significant recognition for his work in various books[4] and journals.,[5] but unfortunately Dr. Swinford died in November 1971 before solidifying the future of his creation. For this reason, some people question the long term success of his program, but despite this questioning his work played a significant influential role in re-igniting the interest by some individuals and as a result there has been a resurrection of the Bandog name.

Dr. Swinford's vision developed somewhat from seeing the traditional working breeds dogs suffer from poor selection due to show breeders placing cosmetic appearance over the functional aspects of breeds. To awaken these lost abilities and to improve the effectiveness of the modern protection Mastiff type dogs, Swinford desired to recreate the working Mastiff dog by once again selecting on performance over all other criteria as had been done for centuries before.[6] By using performance measures Swinford required his dogs to be completely safe, trustworthy, and stable within their home environment, yet also fear nothing when a protective situation deemed necessary. For this reason, Swinford selected game dogs to play a major role in awakening the functional working mastiff type dogs by improving their stamina, drives, athletic ability, confidence, and overall health.[6] 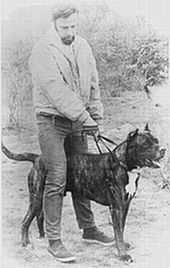 Today there are many versions of the modern day Bandog, and as a result the Bandog today lacks a unified breed standard or direction. For these reasons, there is typically little or nothing in common between the modern Bandog programs and Dr. Swinford's program other than the "Bandog" name itself. That said, there are indeed some high-quality modern Bandog programs in existence today that do have very specific goals even though these goals may not be unanimous between one breeder and the next. Such dedicated breeders may maintain the practice of performance-based selection within their own programs, but a few have maintained long-term success in their endeavors or produced multiple-generation dogs for more than a decade. To further compound the complexity of the Bandog as a future pure breed, there are also other less dedicated bandog programs that lack any specificity of working goals whatsoever, yet such programs are able to get away with using the name Bandog name in a generic sense of the word since the breed lacks a unifying registry for work-oriented breeding stock. For these reasons, it is wise for those interested in the Bandog to put forth significant research about their expectations from such dogs.[citation needed]

While the Bandog is still a relatively rare breed, those familiar with a well-bred Bandog often develop the opinion of it being the perfect protection dog for their needs. Various programs have used the American Pit Bull Terrier, American Staffordshire Terrier, English Mastiff, and Neapolitan Mastiff for foundation breeds, but depending upon the program other breeds not mentioned here may have also been used. There are a few programs in existence today that have put forth the commitment necessary to produce multiple generations of Bandogs that are consistently producing working class lines of the breed. Because the Bandog is supposed to be a true working guard dog and because few programs actually put forth the effort to test their stock, it is wise verify the breeder's practice for testing their stock. This is because intention of quality Bandog breeders should be to combine the courage, tenacity, health, and athletic ability of the American Pit Bull Terrier with the larger size, power, and guarding instinct of the Mastiff.[citation needed]

For those who truly breed dogs for guarding purposes, requiring the dogs to be suitable for such work is a normal practice and therefore they should be able to provide demonstrations of their dogs performing such duties. Testing the worthiness of breeding stock is necessary to maintain the quality of the breed, as this practice allows the breeder to evaluate the dog for having the appropriate temperament, phenotype, stability, confidence, nerves and drives needed to excel as a home guardian or personal protection dog. The Bandog should be a rugged dog, moderate to heavily boned, heavily muscled, intimidating when seen, and is a very formidable guardian when provoked by someone outside of the family unit. Committed programs will only breed working Bandogs and maintain dedicated planning in order to carefully select the best performing representatives to genetically contribute towards future generations.[citation needed]

The breed ideal is a broad skull, a strong muzzle that is medium to long muzzle depending on the strain, a powerful neck, broad shoulders, a powerful chest, strong rear quarters, great agility, and overall an intelligent and very well controlled dog. When it comes to color, the best breeders generally fall into one of two philosophies, one of which places no emphasis on color whatsoever, and the other believing a guard dog should display a degree of natural camouflage (and therefore avoiding the use of dogs that display significant portions of white). The first philosophy operates under the belief that the best dogs will naturally select out the undesired traits, and second philosophies operates under the belief that protection tests do not accurately evaluate the role of camouflage in trial situations, and therefore those who concede to this later belief choose to model nature's general selection against white coats in non-Arctic types of environments (recognizing that white not only exposes one's position, but also noting that white coats have also been linked to degree of health problems in dogs).[citation needed]

Dogs should generally be a minimum of 90# and 25" at the withers, with no upper limits of weight or height are placed upon the breed as long as the dogs are able to perform efficiently. Bitches should be a minimum of 80# and 24", and also have no upper limits as long as they too are able to perform efficiently. All dogs and bitches should be kept in reasonably good working condition. Non-working temperament, poor structure, laziness, lack of courage, lack of drive, lack of nerve, and even obesity are all considered breed faults.[citation needed]

The hope is that the breeding of these dogs will finally be perfected; however, the Bandog is being bred by many breeders who range from the very serious and knowledgeable to the very amateurish and inexperienced, sometimes called backyard breeders. Like all dogs, the Bandog can display either the best or the worst characteristics of the parents (or the parent breeds), depending on the knowledge of the breeder and the randomness of genetics. Therefore, a purchaser of a Bandog must do a good deal of investigation to avoid the risk of buying a puppy from a breeder that does not understand the necessity of proper selection.[citation needed]

The Primary Group, approximate average of 25-75% from American Pit Bull Terrier (aka the "Bull-n-Terrier").

The Secondary Group, approximate average of 25-75% from English Mastiff and/or Neapolitan Mastiff.