The cephalic index or cranial index is the ratio of the maximum width of the head of an organism (human or animal) multiplied by 100 divided by its maximum length (i.e., in the horizontal plane, or front to back). The index is also used to categorize animals, especially dogs and cats. 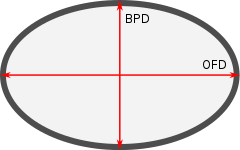 Use in human anthropology (Historic)[edit] 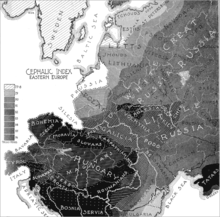 The index was widely used by anthropologists in the early 20th century to categorize human populations, and by Carleton S. Coon in the 1960s. Today it is mainly used to describe individuals' appearances and for estimating the age of fetuses for legal and obstetrical reasons.

The cephalic index was defined by Swedish professor of anatomy Anders Retzius (1796–1860) and first used in physical anthropology to classify ancient human remains found in Europe. The theory became closely associated with the development of racial anthropology in the 19th and early 20th centuries, when prehistorians attempted to use ancient remains to model population movements in terms of racial categories.

Cephalic indices are grouped as in the following table:

The usefulness of the cephalic index was questioned by Giuseppe Sergi, who argued that cranial morphology provided a better means to model racial ancestry.[1] Also, Franz Boas studied the children of immigrants to the United States in 1910 to 1912, noting that the children's cephalic index differed significantly from their parents', implying that local environmental conditions had a significant impact on the development of head shape.[2]

Boas argued that if craniofacial features were so malleable in a single generation, then the cephalic index was of little use for defining race and mapping ancestral populations. Scholars such as Earnest A. Hooton continued to argue that both environment and heredity were involved. Boas did not himself claim it was totally plastic.

In 2002, a paper by Sparks and Jantz re-evaluated some of Boas' original data using new statistical techniques and concluded that there was a "relatively high genetic component" of head shape.[3] Ralph Holloway of Columbia University argues that the new research raises questions about whether the variations in skull shape have "adaptive meaning and whether, in fact, normalizing selection might be at work on the trait, where both extremes, hyperdolichocephaly and hyperbrachycephaly, are at a slight selective disadvantage."[2]

In 2003, anthropologists Clarence C. Gravlee, H. Russell Bernard, and William R. Leonard reanalyzed Boas' data and concluded that most of Boas' original findings were correct. Moreover, they applied new statistical, computer-assisted methods to Boas' data and discovered more evidence for cranial plasticity.[4] In a later publication, Gravlee, Bernard and Leonard reviewed Sparks' and Jantz' analysis. They argue that Sparks and Jantz misrepresented Boas' claims, and that Sparks' and Jantz' data actually support Boas. For example, they point out that Sparks and Jantz look at changes in cranial size in relation to how long an individual has been in the United States in order to test the influence of the environment. Boas, however, looked at changes in cranial size in relation to how long the mother had been in the United States. They argue that Boas' method is more useful, because the prenatal environment is a crucial developmental factor.[5]

Use in animal breeding (Modern)[edit]

The cephalic index is used in the categorisation of animals, especially breeds of dogs and cats. 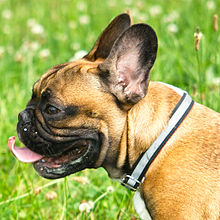 A brachycephalic skull is relatively broad and short (typically with the breadth at least 80% of the length). Dog breeds such as the pug are sometimes classified as "Extreme Brachycephalic".

Breeds with less extreme brachycephalia, such as the Boxer, have less compromised thermoregulation and thus are more tolerant of vigorous exercise and heat.

This list is incomplete; you can help by expanding it. 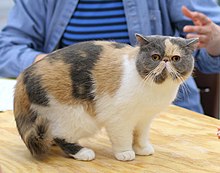 A mesaticephalic skull is of intermediate length and width. Mesaticephalic skulls are not markedly brachycephalic or dolichocephalic. When dealing with animals, especially dogs, the more appropriate and commonly used term is not 'mesocephalic', but rather 'mesaticephalic', which is a ratio of head to nasal cavity. The breeds below exemplify this category.[6][7]

A dolichocephalic skull is relatively long skull (typically with the breadth less than 80% or 75% of the length).