Jump to content
From Wikipedia, the free encyclopedia
This article is about work dogs. For illegal use of attack dogs, see Dog fighting. 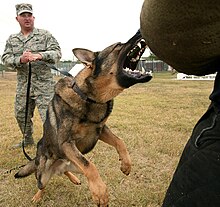 An attack dog is any dog trained by a human to defend or attack a territory, property or persons either on command, on sight or by inferred provocation.[1] Attack dogs have been used often throughout history and are now employed in security, police, and military roles.

Early in recorded history there are records of dogs being trained for the purpose of attacking a target.[2] One of the most well-recorded ancient uses was in a battle between the Athenians and Corinthians, in which dogs were used to keep watch over a fortress and despite being unsuccessful in opposing an enemy attack, were able to alert the sleeping soldiers to the attack. Ancient Romans first adopted the use of dogs as a weapon after hordes of dogs delayed their victory in the Battle of Versella. The Romans not only trained them to attack, but also bred their attack dogs for ferocity. The effect of this was documented by Roman naturalist and writer Pliny the Elder, who wrote that the animals would not back down, even when confronted by swords. The Roman attack dogs were given metal armour covered in razor-sharp spikes, designed to force the enemy out of formation.[3]

Napoleon utilised dogs for their superior senses, putting them to work in roles similar to that of modern sentry dogs.[4] The first use of attack dogs in United States of America was suggested by Benjamin Franklin.[5] In South Africa under Apartheid, the South African Defence Force used wolf-dog hybrids as experimental attack dogs to combat guerillas.[6]

Attack dog training is a variation of sentry dog training, only instead of bringing attention to an intruder, is trained to chase, hold and injure, or possibly kill, a perceived hostile target.[7] Attack dogs are trained to interpret a situation and react accordingly. In formal training, the dogs are exposed to gunfire, traffic and other distractions to increase their effectiveness.[8] Attack training is condemned by some as promoting ferocity in dogs; a 1975 American study showed that 10% of dogs that have bitten a person received attack dog training at some point.[9]

Various modern military groups also use attack dogs, primarily for sentry purposes. The dogs are trained to defend their post and attack any possible intruders.[10] It is also reported that dogs have been used in psychological torture against prisoners of war.[11]

Additionally, attack dogs are used by almost every police force in the world for apprehending and subduing targets (see police dog). The dogs are trained to identify situations where humans are in danger and respond accordingly.[12] Police attack dogs are generally trained to hold a target rather than to inflict injury. Today attack or guard dogs with military-level training may also be used outside the military by individuals or families. These elite dogs may cost hundreds of thousands of U.S. dollars.[13]